The company behind the popular vaping product has come under fire in recent months for marketing schemes that heavily target teenagers and claims that its products are a healthier alternative to traditional cigarettes.

JUUL electronic nicotine delivery systems have not received U.S. Food and Drug Administration approval to be advertised as such, officials said. The state’s investigation will attempt to determine whether the e-cigarette giant has marketed itself as a smoking cessation device despite the absence of FDA approval.

State Attorney General William Tong and Consumer Protection Commissioner Michelle Seagull, who opened the investigation, said they believe the company’s health claims are largely unfounded and that there is mounting evidence to the contrary.

The investigation comes on the heels of a study released by Yale University earlier this week, which found that the liquid-based devices not only carry nicotine but the chemicals used for flavoring can irritate lungs and airways.

The known and unknown harms of e-cigarettes in large part inspired legislation raising the legal smoking age to 21.

“The smoking age is going up from 18 to 21 shortly in recognition of the fact that there are health consequences to all these products and we’re still learning more and more about them as the study reveals,” Consumer Protection Commissioner Michelle Seagull said. “So it’s really important for us to understand how are these products being marketed.”

Miriam Delphin-Rittmon, Commissioner of the Department of Mental Health and Addiction Services, said the state has made tremendous strides in preventing and reducing tobacco use in the last few years.

“Ensuring that manufacturers market their e-products honestly and responsibly is one step toward continuing our progress to reducing e-cigarette and tobacco use and resulting essentially in a healthier Connecticut,” Delphin-Rittmon said.

Tong and other state officials have questioned the dissonance in the company’s messaging. Tong said the company has previously made claims that it is not marketing a smoking cessation device despite a mission statement which outlines a goal of eliminating cigarette use entirely. “We envision a world where fewer people use cigarettes and where people who smoke cigarettes have the tools to reduce or eliminate their consumption entirely,” their website says. 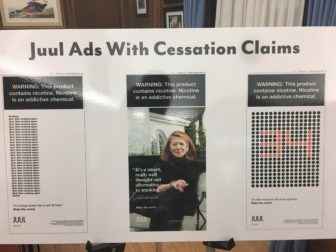 Connecticut Attorney General William Tong pointed to JUUL’s advertising campaigns that portray the e-cigarette as a safe alternative to cigarettes.

The investigation will build upon a complaint brought by six organizations, including the American Academy of Pediatrics and the American Heart and Lung Associations, calling on the FDA to investigate JUUL’s health claims and promotional practices.

“They’re asking the FDA to take action. We’re not waiting on the federal government. Connecticut is taking action today,” Tong said. “We are launching civil investigative demands, essentially subpoenas asking for information from JUUL about these claims and marketing efforts so we can get to the bottom of this and protect Connecticut’s children and our families.”

The state is demanding that JUUL, which is headquartered in San Francisco, respond to questions and turn over documents no later than Sept. 3.

Tong said Connecticut is the latest shoe to drop in a growing reckoning with e-cigarette consumption nationwide — South Carolina has also commenced suit against JUUL, while Massachusetts has launched an investigation into another e-cigarette manufacturer.

“I think there’s going to be more action across the country on this issue,” Tong said.

According to Tong, one in five high-schoolers in the United States vape or use e-cigarettes, a number that has been significantly increasing since 2017. From 2017 to 2018 there was a 78 percent increase in the number of high school students vaping and a 55 percent increase among middle schoolers, Tong said.

“Millions of American high schoolers and middle schoolers are now vaping in school, in class, in school bathrooms,” Tong said. “And I don’t think it is an overstatement to say that this has become an epidemic here in Connecticut.”

Connecticut suspensions and expulsions related to vaping increased six-fold, from 349 back in 2016 to 2160 over the last two years, he said.

Patricia A. Rehmer, Senior Vice President of Behavioral Health at Hartford HealthCare, said vaping is an addiction and should be treated as such.

“As we always say, you can’t arrest yourself out of a crisis nor can you suspend kids out of a crisis,” Rehmer said. “This is an addiction like anything else… if we can keep our kids from using any substance, including marijuana, before the age of 18, even if you’re genetically [predisposed], your child stands a 95 percent better chance of not getting addicted to any substance.”

Nancy Lefkowitz, a Fairfield resident and advocate who made repeated calls to Tong about the growing vaping epidemic at her children’s schools, said it’s a shame that her 10-year-old is going to school and is able to identify this device.

“We talked about middle school, but I mean, it’s the elementary school kids who are very well aware of the issue,” Lefkowitz said. “There is sort of a coolness factor … so they might not be inclined, but they see something that’s pretty and it looks like a cool thing. They are kids, they’re impulsive and there is a disconnect at 10, 14, 16, and they aren’t going to appreciate the long-term impact that it could have on their lives.”