A major tax deal for a prominent Hartford landlord 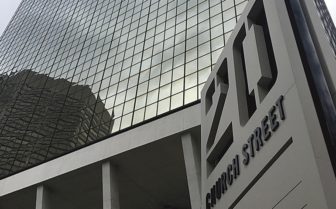 Shelbourne got a tax break on its Stilts Building property.

A recent and notable tax-break deal the city of Hartford hatched in recent years was with one of its most prominent downtown landlords: Shelbourne Global.

Shelbourne is a New York realty investor/developer/landlord that has purchased more than $200 million in Hartford real estate over the last few years, including some of downtown’s most prized Class A office towers.

Most recently, Shelbourne was among a trio of landlord-developers to propose a $100 million residential-commercial redevelopment linking Trumbull and Main streets, via the Pratt Street retail corridor. That project proposes to create 375 new apartments and townhomes, plus 45,000 square feet of retail, mainly along the south side of Pratt, where Shelbourne owns much of the commercial space.

Shelbourne has been bullish on Hartford ever since its first $44 million purchase of the Stilts Building (20 Church St.) in 2014.

However, Shelbourne ran into problems a few years ago, following the city’s 2016 revaluation, which more than doubled the taxes on three of its Class A office towers: 20 and 350 Church St. and 100 Pearl St. The combined tax bill on all three properties grew from $2.6 million to $5.4 million.

“No landlord could withstand those types of increases and few tenants that were required to reimburse for those taxes would remain in our buildings,” Shelbourne managing member Ben Schlossberg said of the revaluation’s impact. “(It) basically put us out of business.”

Shelbourne sued the city over the new valuations, but eventually came to a settlement agreement in 2017. The deal provided Shelbourne property-tax relief by reducing assessments for a set period on several of its downtown Hartford properties, saving it more than $1 million in the most recent tax year.

Without the relief, Schlossberg said, “Our buildings would have gone into foreclosure and, we dare say, the city would have been recertified as a bad place to invest in properties.”

“A good deal is where both sides compromise and get something and that’s the case with the city and Shelbourne,” he added.

“What’s happened for a long time is that you’ve had properties that have begun to fail because of the tax burden they have,” Bronin said. “They then go into foreclosure, get purchased out of foreclosure and the new owners buy away tenants” from other buildings by offering below-market rents, which “they can do because they purchased the buildings cheap. Then you have other buildings that suffer and face that same cycle. Our goal is to try to preserve stability in the commercial market so we can begin getting values up in a more consistent way.”

Here are terms of the tax-lowering deal between the city and Shelbourne:

• 100 Pearl St.: The city fixed, until its next revaluation, the blue-hued skyscraper’s assessed value at just over $15 million. As a result, the building’s property tax bill for the 2017 grand list year was lowered to $1.1 million from an estimated $1.8 million, city records show.

• 36-70 Talcott St.: Shelbourne agreed to pay the city $3.1 million in back taxes on the parking-garage property known as One Talcott Plaza, in the process assuming ownership from parking magnate Alan Lazowski. Overall, Shelbourne agreed to invest $10 million over five years to purchase and fully renovate the garage.