Prisons will add staff to screen for Hepatitis C 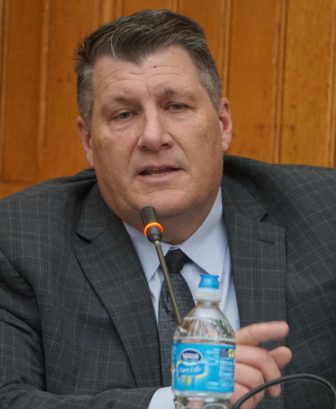 The Department of Correction could temporarily hire about 30 staff members to start testing its inmates for Hepatitis C sometime over the next month, a spokesperson said Thursday afternoon.

In addition to temporarily hiring one, “ideally two” people at each of Connecticut’s 15 jails and prisons to screen the state’s roughly 13,000 inmates for Hepatitis C, the department will need to order kits and establish blood-drawing locations in each of its facilities, said Karen Martucci, a DOC spokeswoman.

“There’s a lot of groundwork to work on now, before that first test takes place,” she said.

DOC plans on screening between 20 and 30 inmates per day, and could eventually make such blood work a part of each inmate’s intake process. “Ideally, when this is caught up, we will be testing everyone that comes in,” Martucci said.

It’s too early to project the cost of screening and treating inmates for Hepatitis C, Martucci said, since it’s unclear how many of those in state jails and prisons will need medication.

“The bulk of the cost is treatment,” she said. “We know that a large amount of our population is vulnerable to this disease.”

A bill considered, but not approved, by lawmakers this year would have required the department to study the prevalence of Hepatitis C in correctional institutions and facilities. The blood tests for the study would have cost $412,765, according to the state’s fiscal analysis  that also notes treatment could cost the state between $43 and $158 million.

“We know that a large amount of our population is vulnerable to this disease.”

Martucci said the DOC’s decision to screen and treat its inmates for Hepatitis C was unrelated to an impending lawsuit that alleges the department does not adequately care for its prisoners infected with the disease. A day after a federal judge allowed a handful of inmates to pursue a class action lawsuit, Commissioner Rollin Cook issued a department-wide memo that said, “The health services staff shall develop clinical guidelines that will result in HCV testing of every inmate incarcerated in Connecticut except for those who discharge prior to being tested.”

Cook had identified the need for Hepatitis C testing and treatment early into his tenure, which began earlier this year, Martucci said.

“We couldn’t produce a plan overnight,” Martucci said of the coincidental timing between the judge’s ruling and Cook’s memo. “This is a big health care topic. So this is something he tackled very early into his arrival.”

Because more than 90 percent of those incarcerated in Connecticut will eventually be released, Martucci said, the DOC views Hepatitis C as a public health threat that should be addressed in jails and prisons, so the disease doesn’t spread from behind bars to Connecticut streets.

“I believe this new initiative will be an effective weapon in combating the spread of Hepatitis C, which is a byproduct of the opioid addiction crisis,” Cook said in a statement. “This is not just a Department of Correction problem, this is a public health problem, and we are more than willing and able to work towards fixing it.”