Health plan’s ‘Cadillac tax’ may be running out of gas 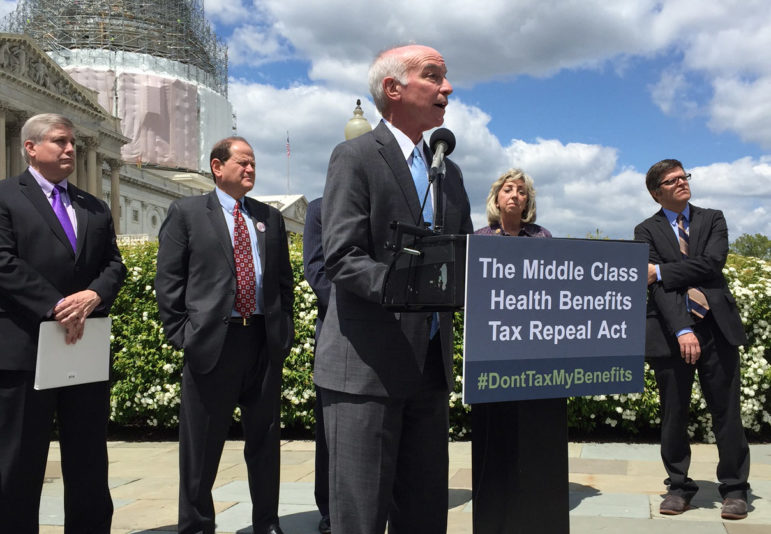 The politics of health care are changing. And one of the most controversial parts of the Affordable Care Act — the so-called Cadillac tax — may be about to change with it.

The Cadillac tax is a 40% tax on the most generous employer-provided health insurance plans — those that cost more than $11,200 for an individual policy or $30,150 for family coverage. It was supposed to take effect in 2018, but Congress has delayed it twice. And the House recently voted overwhelmingly — 419-6 — to repeal it entirely. [Connecticut Rep. Joe Courtney, D-2nd District, was a lead sponsor of the bill.] A Senate companion bill has 61 co-sponsors — more than enough to ensure passage.

The tax was always an unpopular and controversial part of the 2010 health law because the expectation was that employers would cut benefits to avoid paying the tax. But ACA backers said it was necessary to help pay for the law’s nearly $1 trillion cost and help stem the use of what was seen as potentially unnecessary care. In the ensuing years, however, public opinion has shifted decisively, as premiums and out-of-pocket costs have soared. Now the biggest health issue is not how much the nation is spending on health care, but how much individuals are.

“Voters deeply care about health care still,” said Heather Meade, a spokeswoman for the Alliance to Fight the 40, a coalition of business, labor and patient advocacy groups urging repeal of the Cadillac tax. “But it is about their own personal cost and their ability to afford health care.”

Stan Dorn, a senior fellow at Families USA, recently wrote in the journal Health Affairs that the backers of the ACA thought the tax was necessary to sell the law to people concerned about its price tag and to cut back on overly generous benefits that could drive up health costs. But transitions in health care, such as the increasing use of high-deductible plans, make that argument less compelling, he said.

“Nowadays, few observers would argue that [employer-sponsored insurance] gives most workers and their families excessive coverage,” he wrote.

The possibility of the tax has been “casting a statutory shadow over 180 million Americans’ health plans, which we know, from HR administrators and employee reps in real life, has added pressure to shift coverage into higher-deductible plans, which falls on the backs of working Americans,” said Rep. Joe Courtney (D-Conn.).

Support or opposition to the Cadillac tax has never broken down cleanly along party lines. For example, economists from across the ideological spectrum supported its inclusion in the ACA, and many continue to endorse it.

“If people have insurance that pays for too much, they don’t have enough skin in the game. They may be too quick to seek professional medical care. They may too easily accede when physicians recommend superfluous tests and treatments,” wrote N. Gregory Mankiw, an economics adviser in the George W. Bush administration, and Lawrence Summers, an economic aide to President Barack Obama, in a 2015 column. “Such behavior can drive national health spending beyond what is necessary and desirable.”

At the same time, however, the tax has been bitterly opposed by organized labor, a key constituency for Democrats. “Many unions have been unable to bargain for higher wages, but they have been taking more generous health benefits instead for years,” said Robert Blendon, a professor at the Harvard T.H. Chan School of Public Health who studies health and public opinion.

“At a time when health care expenses continue to go up, and Congress remains divided on many issues, the repeal of the Cadillac Tax is something that has true bipartisan support.”

Now, unions say, those benefits are disappearing, with premiums, deductibles and other cost sharing rising as employers scramble to stay under the threshold for the impending tax. “Employers are using the tax as justification to shift more costs to employees, raising costs for workers and their families,” said a letter to members of Congress from the Service Employees International Union.

Deductibles have been rising for a number of reasons, the possibility of the tax among them. According to a 2018 survey by the federal government’s National Center for Health Statistics, nearly half of Americans under age 65 (47%) had high-deductible health plans. Those are plans that have deductibles of at least $1,350 for individual coverage or $2,700 for family coverage.

It’s not yet clear if the Senate will take up the House-passed bill, or one like it.

The senators leading the charge in that chamber — Mike Rounds (R-S.D.) and Martin Heinrich (D-N.M.) — have already written to Senate Majority Leader Mitch McConnell to urge him to bring the bill to the floor following the House’s overwhelming vote.

“At a time when health care expenses continue to go up, and Congress remains divided on many issues, the repeal of the Cadillac Tax is something that has true bipartisan support,” the letter said.

Still, there is opposition. A letter to the Senate on July 29 from economists and other health experts argued that the tax “will help curtail the growth of private health insurance premiums by encouraging employers to limit the costs of plans to the tax-free amount.” The letter also pointed out that repealing the tax “would add directly to the federal budget deficit, an estimated $197 billion over the next decade, according to the Joint Committee on Taxation.”

Still, if McConnell does bring the bill up, there is little doubt it would pass, despite support for the tax from economists and budget watchdogs.

“When employers and employees agree in lockstep that they hate it, there are not enough economists out there to outvote them,” said former Senate GOP aide Rodney Whitlock, now a health care consultant.

Harvard professor Blendon agrees. “Voters are saying, ‘We want you to lower our health costs,’” he said. The Cadillac tax, at least for those affected by it, would do the opposite.