Religious exemptions to vaccines rose by 25 percent in one year 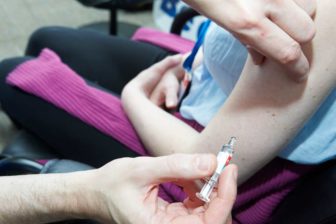 The number of students claiming religious exemptions to mandatory vaccinations rose by 25% between 2017-18 and 2018-19, DPH said Thursday.

The number of students claiming the religious exemption to mandatory vaccinations in Connecticut rose by 25% between the 2017-18 and 2018-19 school years, figures released by the Department of Public Health on Thursday show.

The increase, from 2% to 2.5% of students, was the largest single-year jump in religious exemptions since the department began tracking statewide immunization data a decade ago.

Additionally, the percentage of kindergarteners who were vaccinated against measles, mumps and rubella decreased between the 2017-18 and 2018-19 school years, to 95.9%, down from 96.5%, according to DPH.

Renee Coleman-Mitchell, the state’s public health commissioner, pointed out Thursday that Connecticut is still meeting the guideline recommended by the Centers for Disease Control and Prevention that at least 95% of kindergarteners receive the MMR vaccine. But she said the increase in the religious exemptions “does raise concern.”

“As our children go back to school this week, it is important to have on the parental checklist that all vaccinations are up-to-date,” Coleman-Mitchell said in a prepared statement. “We want to make sure every school in Connecticut has a high enough percentage of immunized children to prevent a vaccine-preventable disease such as measles from spreading in a school environment.”

The release of the statewide figures Thursday capped a week of heated discourse around the disclosure of immunization data.

On Monday, The CT Mirror reported that DPH officials remained tight-lipped about whether they would release school-level vaccination numbers for the 2018-19 year. Lawmakers called for the data to be publicized as school year began for many districts in Connecticut this week.

The next day, Coleman-Mitchell told The Mirror that she would not disclose the 2018-19 figures. A spokesman for Gov. Ned Lamont initially said that circumstances had allowed public health officials to release school-by-school data last spring, but they could no longer do so. The health department in May unveiled school-level immunization data from the 2017-18 year amid a national measles outbreak.

On Wednesday, the governor reversed himself and pledged to make public the school-by-school numbers. He said through a spokesman that once the information is “verified for accuracy,” it will be released. Lamont did not provide a timetable for the disclosure.

In the meantime, the governor said statewide percentages would be shared.

In response to the figures publicized Thursday, Lamont spokesman Max Reiss said: “After the release of today’s vaccination data, Governor Lamont remains open to future policy discussions that could potentially lead to possible revisions to the state’s religious exemptions for immunizations.” 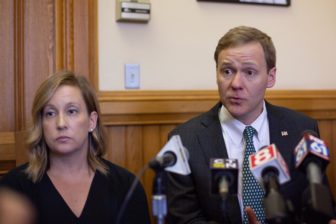 House Democrats, including Majority Leader Matthew Ritter, State Rep. Liz Linehan and State Rep. Josh Elliott, have called for an end to the state’s religious exemption. They are expected to revive a debate next year about repealing the provision.

“At the end of the day, the size of the increase speaks even more clearly to the idea that our state has to look at what it is doing, and if what we’re doing is not working,” Ritter said Thursday of the latest data. “It shows a trend. It is a trend that’s troubling.”

Elliott said that while the percentage of kindergarteners vaccinated against measles, mumps and rubella remains above 95%, “it’s only a matter of time” before Connecticut dips below that threshold.

“It would be really nice if we were able to address this problem before it became a problem,” he said. “I’m very thankful that the governor’s office has decided to take a stand because this will allow us to ensure all the pieces are in place to eliminate the religious exemption next year.”

Senate Majority Leader Bob Duff, D-Norwalk, said he was “concerned and alarmed” by the newest data.

“This trend is going in the wrong direction,” Duff said. “We must continue to work with health professionals across the state to fight against misinformation from a vocal minority. The health and safety of our children should not be a political football.”

A Bristol couple sued the state last spring seeking to block the release of the 2018-19 school-level data. The couple, Kristen and Brian Festa, have also asked for the removal of the 2017-18 figures from a state website.

After Lamont pledged to release the latest round of data, the Festas filed a motion Wednesday night for a temporary injunction. A judge has not yet ruled on the motion.