Reviving cities must include the excluded 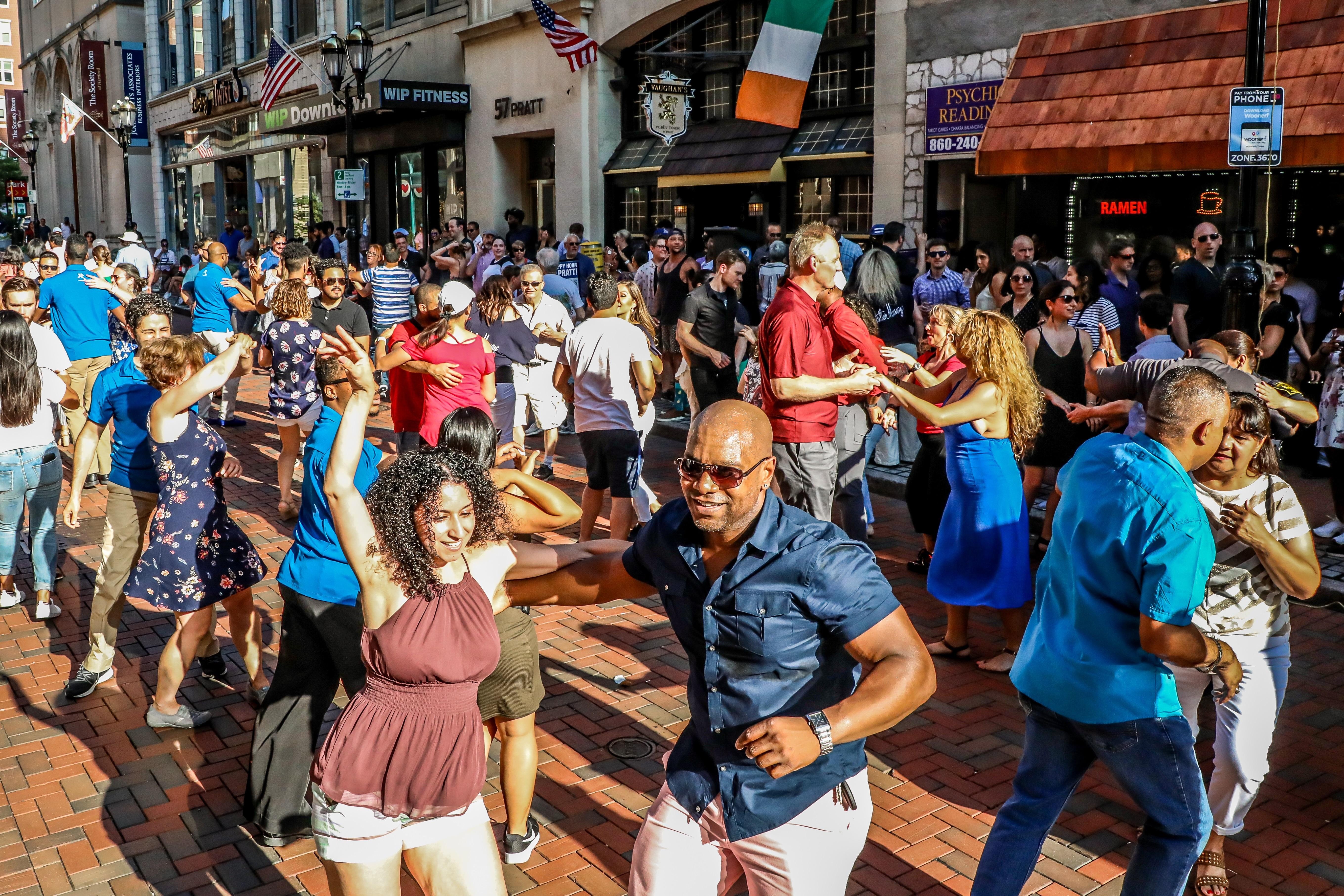 Salsa Socials on Pratt Street in Hartford draw large crowds and add to the sense of the city’s revival, but not all boats are rising.

A quarter century ago, downtown Hartford was 8/5 rather than 24/7. People drove in for work or UConn games and then headed back to the suburbs. It was hard to even buy a cup of coffee on weekends.

That has changed. With 1,500 new apartments completed or in construction, a new UConn branch, new transportation options and minor league baseball, the downtown area is coming back to life.

But just blocks from the theaters and elegant restaurants are some of the poorest neighborhoods in the state.

A massive investment by Yale University that began in the 1990s has helped turn downtown New Haven into a destination, with the state’s tallest residential building, a second train station and a host of hip bars and restaurants.

But — though Yale also made some neighborhood investments— the Elm City also has struggling areas. New Haven’s poverty rate of 25.6%, according to the U.S. Census’ 2017 American Community Survey, trails only New London at 28.3% and Hartford at 30.5%. The number refers to those living below the poverty line, set at $24,860 for a family of four.

This is a local version of a national problem.

Former industrial cities that were thought dead have risen like Lazarus, drawing young people, small businesses and trendy amenities. But the revivals of Baltimore, Cleveland, Pittsburgh and (even) Detroit, as with Hartford and New Haven, have been uneven within their boundaries. Some downtown districts thrive; many other neighborhoods, almost invariably poor, minority enclaves, are left behind.

So the challenge: How can cities share the new-found wealth, bring some of the downtown prosperity to distressed neighborhoods, and revive themselves in such a way that all residents benefit?

“Inclusive revitalization” — defined by The Urban Institute as overcoming economic distress in a way that provides the opportunity for all residents, especially historically excluded populations, to benefit and contribute — has become a hot topic among people who study urban policy, the subject of research papers, symposia and a well-received new book, “The Divided City: Poverty and Prosperity in Urban America” by planner and author Alan Mallach (Island Press).

The issue is important to Connecticut because better functioning cities mean more opportunities for residents, more local commerce and a stronger state economy. It could help reverse the growing — jarring — chasm between the haves and have-nots.

According to an analysis of the 2013-17 U.S. Census American Community Survey by the New Haven-based nonprofit analytics firm DataHaven, the 10 poorest census tracts in the state are in Hartford (4) Bridgeport and Waterbury (2 each) New Haven and Meriden (1 each). In 2017, the average family income in these areas was $29,000.

The 10 wealthiest tracts can be found in Greenwich (5), New Canaan (3) and Darien (2), The average family income in these gilded swaths is $490,000, 17 times that of their neighbors in the bottom 10.  That ratio has almost doubled since 1980, when family incomes in the wealthy tracts were a mere nine times higher than those in the poorer areas.

Allowing this gap between the rich and poor to worsen raises a critical issue of fairness, said Mallach in a recent telephone interview.

“What is a just society? What is a just city?” he asked, adding that our failure to address the issue “is a recipe for a (city’s) future that is unhealthy, problem-ridden and dangerous — look at Chicago and Baltimore.” 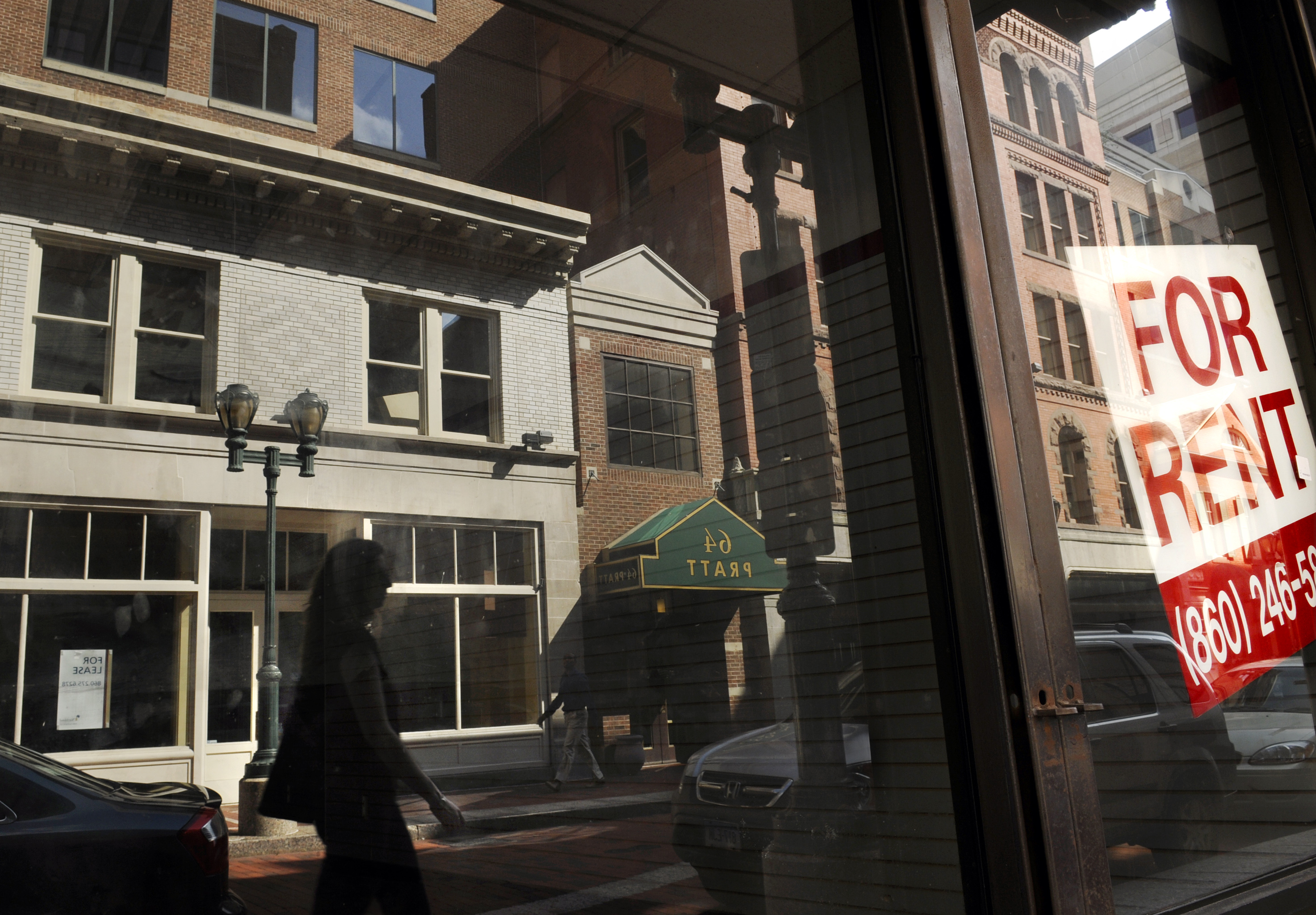 In 2009, the city of Hartford released results of a survey about downtown real estate vacancies that showed that 21 percent of all units were vacant. This photo, taken on Pratt Street, showed the significant number of vacancies in that part of the city alone.

Though the state’s large cities have endured weak leadership from time to time, their decline in the mid-20th century was mostly due to factors beyond their control.

Factories closed or moved. Post-World War II prosperity and a new highway system spurred (overwhelmingly white) flight to the suburbs while mortgage redlining and other policies such as exclusionary zoning kept most minorities in the cities. Most of the populous cities (except Stamford) are geographically small — 18-20 square miles  — and have much tax exempt property, a distinct disadvantage in a state heavily reliant on local property taxes.

And yet, as former Hartford resident Mark Twain might have said, reports of the cities’ demise were greatly exaggerated. Attracted by the traditional advantages of cities — economy of scale, variety, entertainment, convenience, human contact, etc. — people and businesses began moving back, but not to all neighborhoods.

Sharing the revival is a challenge. Along with providing basic services, Bronin is pursuing several inclusion strategies. One is to “get downtown right.” This means renewing downtown in a way that engages its residents as well as visitors, and that has jobs and small businesses opportunities for residents.

“We really try to make sure development goes on across our entire city.”

Another is to “build on strength,” to invest in or near existing nodes of neighborhood development, from the conversion of the former Swift gold leafing factory to a food services job site in the North End to improvements the Upper Albany commercial corridor and the mixed-use development of the Coltsville complex in the South End, among others.

New Haven Mayor Toni Harp has an array of neighborhood projects underway. One, Downtown Crossing, is traversing and developing the Route 34 corridor that walled downtown from the struggling Hill neighborhood for decades. “Now the Hill neighborhood becomes part of downtown,” Harp said.

Another inclusion effort she described is a city partnership with Southern Connecticut State University and Gateway Community College to train city residents for jobs in the city’s expanding biotech sector. There are others, including a worker-owned cooperative laundry to support the local hospitals, based on Cleveland’s remarkable Evergreen Cooperative.

“We really try to make sure development goes on across our entire city,” Harp said.

Are efforts such as these bearing fruit in Connecticut?

Some, but not a ton, according to a Brookings Metro Monitor study released last year. The study rated the country’s largest 100 metros on improvements in inclusion (along with growth and prosperity) in 2015-16, based on median wage,  employment rates and number of people living below the poverty line.

The results were not spectacular. The New Haven, Hartford and Bridgeport metropolitan areas finished 54th, 72nd and 80th, respectively, on inclusion.

As the Brooking study indicates, a lot of metro areas struggle with inclusion. For example, Mallach’s book looks closely at Pittsburgh and Baltimore, both of which — especially Pittsburgh — are widely considered comeback cities, and finds their revivals are limited to a handful of neighborhoods.

But some cities are heading in the right direction. The Urban Institute released an extensive study on inclusion in 2018 titled “Inclusive Recovery in US Cities.” The researchers zeroed in on four cities — Lowell, Mass., Columbus, Ohio, Midland, Tex., and Louisville, Ky. — that outperformed their peers on inclusion as their economies improved.

They attribute the inclusionary success of these cities to some combination of eight factors. The first three — bold leadership, a shared vision and partners in all sectors — are essential to any successful urban revival effort. 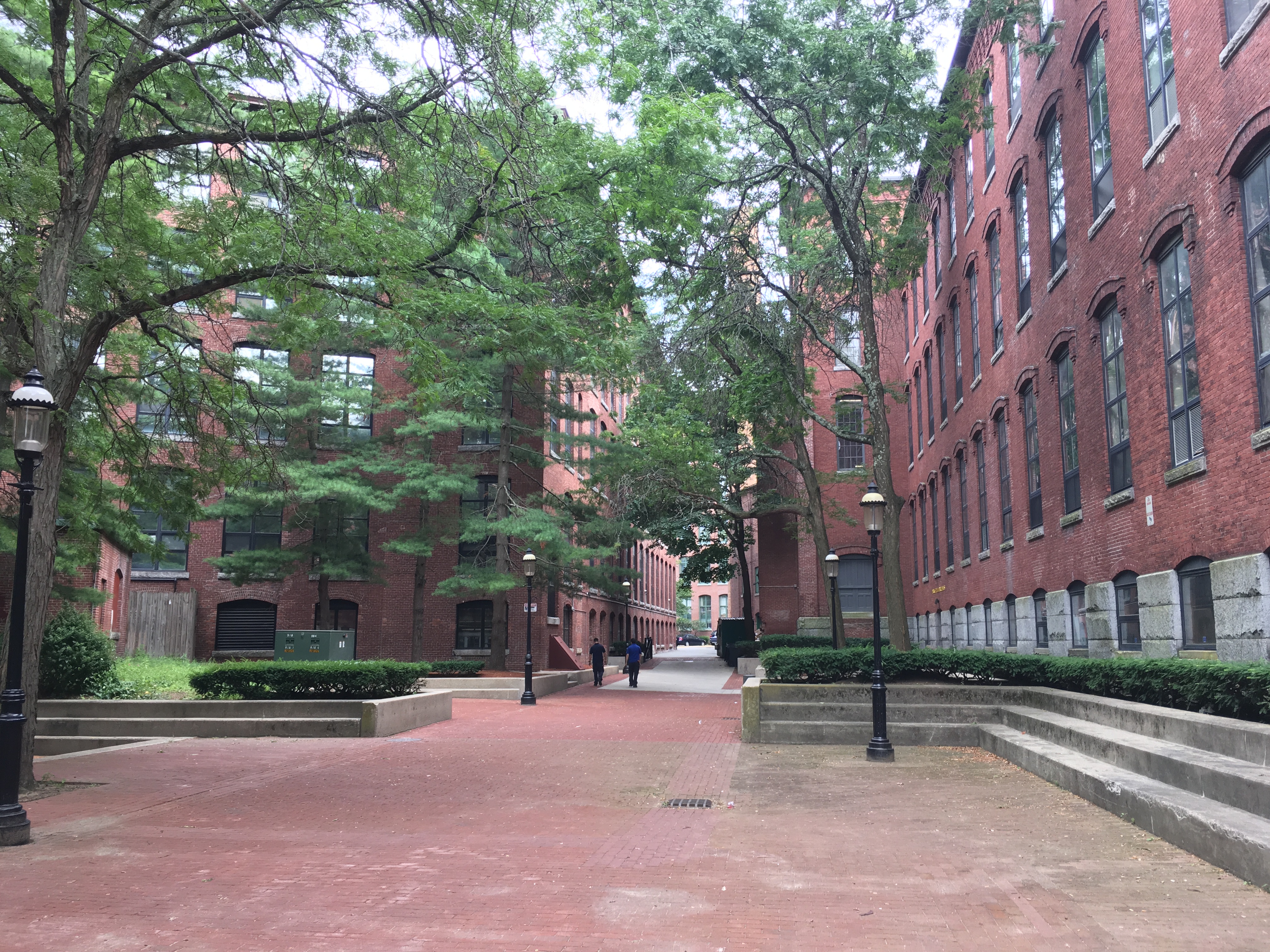 The plaza in Lowell’s national historic park, which was once an abandoned textile mill.

But economic revival by itself doesn’t necessarily lead to more inclusion. Sharing the wealth may also involve a variety of other factors, including the ability to leverage community assets and advantages.

Every city has distinct assets. For example, turning a sow’s ear into a silk purse, Lowell readapted abandoned textile mills into a National Historic Park combined with residential units and office space.

Successful inclusive growth also involves the ability to think regionally. This would be a novel experience for Connecticut, which does not have regional government, but it is done in other parts of the country.

The rationale for regionalization — listen up Nutmeggers — is this: “Fragmented regions, with multiple governments working in isolation, can slow economic growth, lead to fiscal disparities, and impede service delivery,” the study says. Louisville merged with surrounding Jefferson County in 2003, which catapulted it from the 65th to 23rd largest city in the nation, slightly lowered the cost of government, and supported economic growth and regional inclusion.

Disenfranchised communities must also be allowed to build voice and power, experts say. At the time of the 2003 city-county merger in Louisville, civil rights groups successfully pushed for new district lines to preserve African-American representation in the new city council. And Lowell welcomed what became the country’s second largest Cambodian population, understanding that they would help the local economy.

Reframing inclusion as being essential to growth is also important. Louisville has been working for decades to desegregate its public schools, an effort that has been good for recovery.  “By maintaining diverse schools, Louisville has been able to maintain its tax base, as residents are not hollowing out the city by relocating for schools,” the study observes.

Finally, cities interested in inclusive growth should develop policies and programs that support inclusion in education, housing, economic development and fiscal incentives. These can range from college aid programs, affordable housing with access to jobs as well as  training for the jobs that are available.

The key, said Mallach in a recent interview, is to focus intently on the needs of the people who have been excluded.

He said some people from difficult neighborhoods have been beaten down and suffer something like PTSD. He pointed to a Minneapolis job preparation program, Twin Cities R!SE,  that offers both personal empowerment classes as well as skills training to get people into the workforce.

“It’s not as much the money as the mentality,” he said.