Tougher sexual harassment laws took effect Tuesday, but not soon enough for everyone 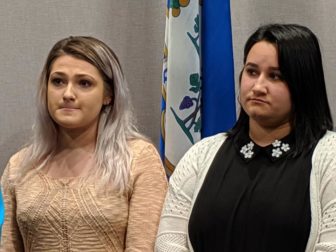 Maizzy Douchette, left, and Gianna Aconfora spoke out Thursday, alleging that they were sexually harassed when they worked at Maggie McFly’s and that management fired them when they complained.

In an effort to draw attention to Connecticut’s new, tougher sexual harassment and sexual assault law, two young women stepped forward Thursday to describe the harassment they say they experienced while working at the restaurant Maggie McFly’s.

Her voice breaking, Maizzy Douchette said she and Gianna Aconfora were “sexually harassed by our manager at Maggie McFly’s both verbally and physically. He made disgusting comments about our bodies and our personal lives and he touched both of us inappropriately.”

She said that when they complained to upper management, they were both fired.

Douchette and Aconfora, who sued the restaurant in Hartford Superior Court on Wednesday, spoke at a news conference at the Legislative Office Building to “be a voice for other women,” Aconfora said, and to focus attention on the new legislation that took effect on Tuesday.

“We didn’t know where to turn to, what to do. But family members of mine convinced us that we could find people who would stick up for up for us and that we would have organizations that would support us as well,” Douchette said.

Sen. Mae Flexer, D-Killingly, who was a key proponent of the legislation, known as the “Time’s Up Act,” said that her hope is that with the new laws in place, young women like Douchette and Aconfora won’t have to rely on having an informed family member.

Instead, Flexer said, all employees will be trained on sexual harassment law and will know “what correct behavior is and what it isn’t and they’ll also know … where to go if you want to file a complaint, where to go to make it stop, what the protocols are.

The new law requires workplace training to combat sexual harassment. It also eliminates the statute of limitations for sexual assaults against minors and expands it in cases involving adults.

Under the previous law, companies with 50 or more employees were required to provide at least two hours of training on sexual harassment to supervisory employees within six months of their employment.  The new law requires employers with three or more employees to provide that training, and extends the requirement to all employees.

The law is prospective, meaning it does not subject anyone to prosecution in older cases where the statute of limitations applied. But it greatly expands the time under which victims of assault can pursue damages in civil court or justice in criminal court. 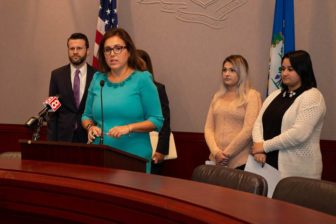 Sen. May Flexer was a key proponent of legislation to toughen sexual harassment laws that took effect this week.

“Women in the workplace should not have to fear retaliation for being brave enough to come forward and share their stories,” Flexer said. “Justice for women like Gianna and Maizzy can only occur when our laws are updated to reflect changes in society. In the era of ‘Time’s Up’ and ‘Me Too,’ society’s view on the issue of sexual assault and harassment is finally changing and we cannot have antiquated laws that won’t adequately address claims such as these.”

The new law “sends a message to victims that we believe you and hear you and I’m hopeful that more victims of sexual assault and harassment will feel empowered to come forward and seek justice,” she said.

The lawsuit filed by Douchette and Aconfora is lodged against Maggie McFly’s and Daniel Therian, who was a manager at the restaurant’s Manchester and Glastonbury locations. Their case is receiving legal and public relations support from the TIME’S UP Legal Defense Fund, which is administered by the National Women’s Law Center.

In a statement Thursday, the restaurant’s founder and president, Ray Harper, denied the allegations made in the lawsuit.  The restaurant’s company headquarters are in Southbury.

“Maggie McFly’s is a locally owned, community oriented family restaurant with deep roots in the State of Connecticut.  Maggie’s fully supports Senator Flexer’s efforts and applauds her work championing the rights of those who are subject to workplace harassment,” Harper said. “The company, which is proud of its relationship with its over 500 Connecticut employees, vehemently denies the factual allegations of Ms. Aconfora and Ms. Douchette.”

Therian could not immediately be reached for comment Thursday.

The suit outlines numerous instances of demeaning and sexually harassing remarks allegedly made by Therian to the two women, as well as instances where Therian physically lashed out against them.

Joshua R.Goodbaum, a New Haven attorney who is representing the women, said Therian is no longer working at the restaurant, but he said he was not certain exactly why he departed.

The lawsuit alleges that Therian made numerous harassing comments to both young women, saying to Aconfora, “Let me see your boobs. I see them popping out of your shirt” and “I could do damage to those boobs,” and told Therian, “I’m going to kill you and rape your dead body.”

The suit says that both women were terminated after reporting the sexual harassment to management.