Jose DeJesus pulls his silver minivan out of a parking lot in back of a row of historic houses on New Haven’s Congress Avenue. He points with pride to the flowers he planted around the lot. Then he grimly spins a commentary as he gives a tour of the surrounding Hill neighborhood.

• There’s the John C. Daniels School, where parents are dropping off kids and where a man overdosed and died near a rear stairwell over the summer.

• Across the street, there’s the APT Foundation clinic, where clients in recovery from opioid use come every morning for methadone.

• There’s the bodega on the corner, where, he says, APT clients hang around and drug dealers tempt them with offers of heroin and other drugs.

“The clinic is a thorn in our side. People come to New Haven from all over and they hang out in the Hill,” says DeJesus, who is treasurer of the neighborhood’s community management team. 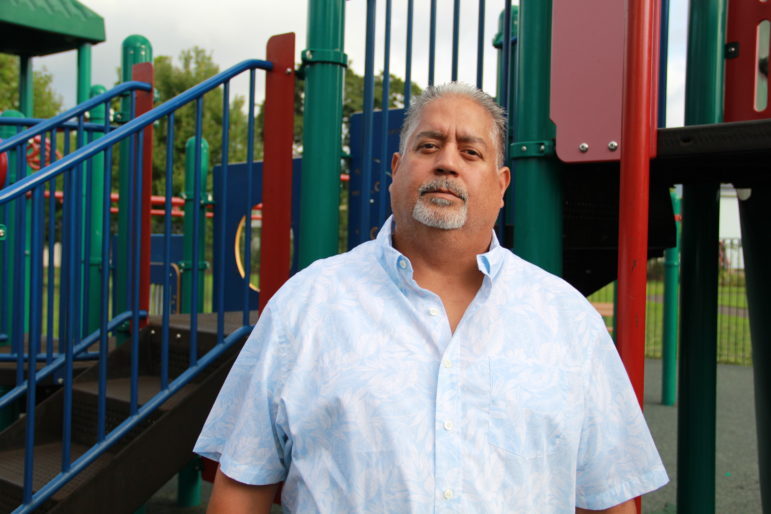 Jose DeJesus, treasurer of the Hill neighborhood’s community management team, said that the APT Foundation clinic has created a magnet for outsiders to come for treatment and hang out in the area.

Just weeks earlier, residents at a Hill community meeting spent more than an hour criticizing APT—complaining that its policies have made the city a magnet for people coming from other cities and towns. Meanwhile, methadone itself is often disparaged. Critics say treating people with the drug, which is an opioid, amounts to trading one addiction for another.

Lynn Madden, chief executive officer of APT, is exasperated by the criticism. She points out that methadone is vastly superior to abstinence-based treatments for opioid use disorder, which is a chronic, relapsing disease. Methadone treatment results in 60% to 80% of patients remaining in treatment for one year or more. Meanwhile, fewer than 10% of people who do not use medication as part of their treatment remain in recovery for one year. She says the foundation’s responses to criticism—including creating a waiting room inside the Congress Avenue clinic and opening a new clinic in West Haven—has largely addressed the loitering issues.

“Despite decades of evidence that methadone is effective, saves lives, prevents HIV, and is inexpensive, there has been no lessening of the stigma for the patients and the treatment, the clinics that offer it, and the people who work in the clinics,” Madden says.

The frictions on Congress Avenue show why it’s difficult for Connecticut to deal with its opioid crisis. The federal government regulates methadone—limiting distribution to specialized clinics, which are mostly in cities. Yet over the past two decades, opioids have spread rapidly to the suburbs and rural communities.

“Methadone should be offered everywhere. Yes, there needs to be regulation and oversight and training, but it should be much easier for people to access it,” says Dr. J. Craig Allen, vice president of addiction services, Hartford Healthcare Behavioral Health Network. 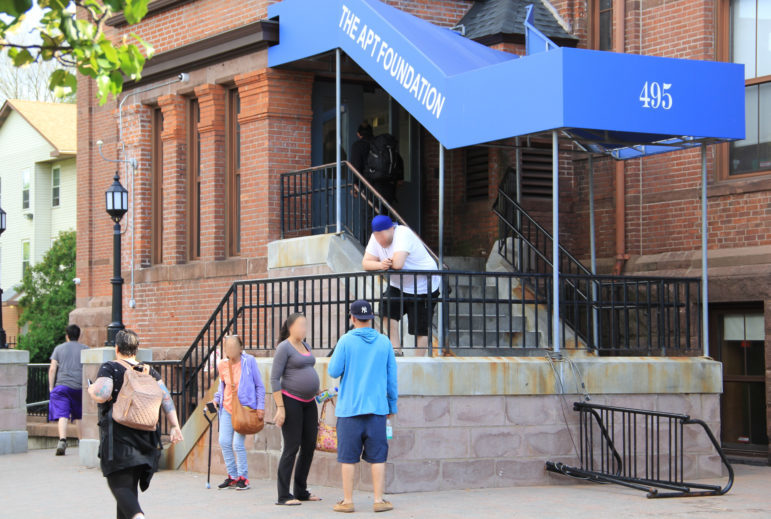 Outside the APT Foundation in New Haven.

The focus on treating addiction as a crime, the so-called “War on Drugs,” has long put the onus on police to solve the problem—dealing with everything from loitering to drug dealing to shootings. Police say it’s too much. “I think I speak for every police officer in America when I say we’re tired of people seeing law enforcement as the solution,” says New Haven Police Chief Otoniel Reyes. “We’re not able to do that.”

In June, six people died from opioid overdoses in Hartford in a three-day period. Last year in New Haven, more than 100 people overdosed in 24 hours on a drug known as K2, which is not an opioid. New Haven assembled an Overdose Response Task Force and launched new initiatives, including hiring a “street psychiatrist” to help deal with substance abuse problems among the city’s homeless.

But healthcare leaders say more changes are needed. Primary among them is expansion of the number of methadone clinics in the state. Connecticut has 29 clinics, serving 21,288 individuals, according to the Department of Mental Health and Addiction Services. In spite of the growing addiction problem, only two clinics have been added in the past five years—one in West Haven and one in Waterbury.

Several organizations are considering opening new clinics—mostly in the middle of the state, along the shoreline and in the more rural areas. But when they propose new clinics, they typically face fierce opposition. “I have had people grab me, scream in my face and spit at me in hearings,” says APT’s Madden.

Organizations that want to open new clinics are working closely with local political leaders and community groups, and plan on putting them in commercial rather than residential areas. They’re also considering more creative solutions. Connecticut Counseling Centers, with methadone clinics in Waterbury, Norwalk and Danbury, is looking at providing mobile methadone treatment, according to President Rob Lambert. Medical staff would interview patients, administer methadone and provide counseling in a bus or RV.

A second major change would make it easier for patients to start and continue treatment. Now, APT has one of the most humane models in the state, health experts say. It admits clinically appropriate people to treatment immediately after evaluations, so they don’t have to wait days or even weeks to begin. All too often, people who have to wait lose their resolve to stay off drugs. Also, APT doesn’t automatically stop treating people if they fail a drug test. The idea is it’s better to refine the treatment plan rather than cut people off, which puts them at risk of overdosing and dying. “They attract patients from all over the place who would rather be treated like human beings instead of like cattle,” says Robert Heimer, a professor at Yale School of Public Health.

In fiscal year 2019, just 42.2% of APT’s Congress Avenue patients came from New Haven. The rest came from other cities and towns, including 9.9% from Waterbury, according to state records.

Rather than saying APT should change its policies, some healthcare advocates call for other methadone clinics to become more like APT. That way people who don’t live in New Haven might seek treatment in their own communities. “APT gets a bad rap. I think it would be better for other clinics around the state to adopt their model,” says Mark Jenkins, founder and chief executive officer of the Greater Hartford Harm Reduction Coalition.

When New Haven Mayor Toni Harp launched the Overdose Response Task Force, she hoped that one of the solutions would be for the federal government to permit more doctors throughout the state to treat patients with methadone. But she quickly discovered that’s a nonstarter. “The federal government stands in the way,” she says.

Methadone is more heavily regulated than the other medication-assisted treatments for opioid use disorder because it’s more easily abused, which could result in an overdose.  That’s why patients have to report to the clinic every morning to take their medication.

While the federal government seems unlikely to make major changes in methadone regulations, Neeraj Gandotra, the chief medical officer for the federal Substance Abuse and Mental Health Services Administration, says expanding access to treatment is a priority. His agency is exploring the use of telemedicine to help increase access in rural areas to buprenorphine, a medication-assisted treatment that isn’t as highly regulated at methadone. He says federal agencies are looking at other approaches for methadone, but it’s premature to discuss them.

For its part, Connecticut has adopted an all-hands-on-deck approach to dealing with opioids. That includes an awareness campaign called “LiveLoud” and efforts to expand access to treatment. Programs aimed at expanding the number of care providers prescribing buprenorphine have been less successful than had been hoped, but officials at the Department of Mental Health and Addiction Services are open to working with federal agencies to increase access to medications, including methadone. “The goal is to blanket the state with as many options as possible,” says Commissioner Miriam Delphin-Rittmon.

The Substance Abuse and Mental Health Services Administration’s (SAMHSA) National Helpline is 1-800-662-HELP (4357).  It is a free, confidential, 24/7 referral and information service for individuals and families facing mental and/or substance use disorders.

SAMHSA provides information on buprenorphine and a practitioner locater here.