School-aged child in Fairfield County is the fourth case this year, officials say 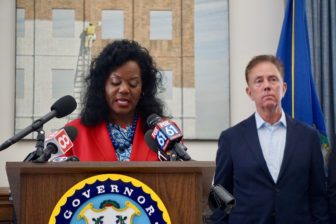 Health officials in Connecticut have recorded a fourth case of the measles this year, this time in a school-aged child.

State Health Commissioner Renee Coleman-Mitchell said Friday that the child was not infectious while at school. She declined to reveal what school the child attends, saying only that the person is from Fairfield County.

The child appears to have contracted the disease in early October, officials said. The latest measles case is not related to the three reported in January and April of this year. All of the earlier cases occurred in adults.

“We are monitoring and investigating this case very closely, including working with our local health departments and medical providers to follow up with any individuals that may have been exposed to measles,” Coleman-Mitchell said.

She urged people to get immunized against the disease.

“Science tells us that the single best thing anyone can do to protect themselves from this highly contagious virus is to get vaccinated,” she said. “This latest confirmed case, coupled with declining statewide immunization numbers for measles, is exactly why Governor [Ned] Lamont and I are recommending repeal of non-medical exemptions for vaccination.”

Earlier this week, the health department released data showing 134 schools across Connecticut at which fewer than 95% of kindergarteners received a measles vaccination in 2018-19, up from 102 schools a year earlier. The 95% threshold is recommended by the Centers for Disease Control and Prevention to maintain herd immunity – the indirect protection from infectious diseases that occurs when a large number of people become immune, especially by way of vaccination.

The data released by DPH this week also shows an increase of 25% in the number of students claiming the religious exemption, the largest recorded by the state since it began tracking the information a decade ago.

The health department would not say Friday if the child who has contracted measles attends a school that has fallen below the 95% vaccination threshold, or if a religious exemption was claimed by the child’s parents.

Coleman-Mitchell and Lamont have pointed to the most recent figures as evidence that the state’s religious exemption should be repealed. They recommended it be eliminated effective Oct. 21, 2021 to give parents time to prepare for the change. Lawmakers have promised to introduce a bill when the legislative session begins in February.

The proposal would not force children to be immunized, but it would bar most unvaccinated kids from enrolling in Connecticut’s public and private schools. State officials have cited concern for children with compromised immune systems who cannot be vaccinated for medical reasons.

Vaccinations are required for all students entering public and private schools, but home-schoolers are not covered.

“One of the arguments you keep hearing is ‘What’s the emergency? No child has measles,’” he said. “We said it was only a matter of time given the low vaccination rates at certain schools. And here we are in October with a child who has contracted the measles. I can only hope it’s not at a school with a low vaccination rate because it spreads very easily and very quickly.”

“My thoughts are with the child and the family from Fairfield County, right in our own backyard, during this difficult time,” he said. “The health of our residents is at stake from a completely preventable disease. It is imperative we remove non-medical exemptions to increase vaccination rates statewide.”

Dawn Jolly, a co-founder of CT Freedom Alliance, a group supportive of vaccine exemptions, questioned why the public health department wouldn’t release more information about the child, including whether the person had been immunized against measles.

“For Commissioner Coleman-Mitchell to publicly state that this is proof that we need to repeal the religious exemption in Connecticut is irresponsible and a dereliction of her duties,” Jolly said. “At this point we don’t know where the virus was contracted, whether the child was vaccinated for the measles, whether it was a wild strain or a vaccine strain, or even whether the child attends school in the state.”

Nationally, at least 1,250 cases of the measles have been recorded in 31 states this year. It is the highest number of cases reported in the U.S. since 1992.

Researcher: Medicare Advantage plans costing billions more than they should