Sitting barefoot in a New Haven yoga studio, Democratic presidential candidate and best-selling New Age author Marianne Williamson offered a guide for cleansing the soul of America’s corrupted body politic: through paying hundreds of billions of dollars in reparations to the descendants of enslaved Africans.

Williamson made that campaign pitch Friday afternoon in what at first glance might appear to be an unorthodox stop for someone running to become president — the Balanced Yoga studio on the second-level of an unassuming shopping center at 1079 Whalley Ave. in Westville.

But the intimate yoga studio’s hardwood floors, gently glowing afternoon light, and wall-length mirror reflecting Williamson and the 70 campaign supporters who had shown up to hear her speak provided a perfect fit for her hour-plus speech. The speech was suffused with righteous indignation and moral outrage and ominous spiritual warnings. “Nobody here,” Williamson declared, “is naive about the shadow sign of America.”

“The struggle and contest between dark and light as a nation has always been there,” she told the rapt audience, her purple-painted toenails outstretched before her fold-out white plastic chair. 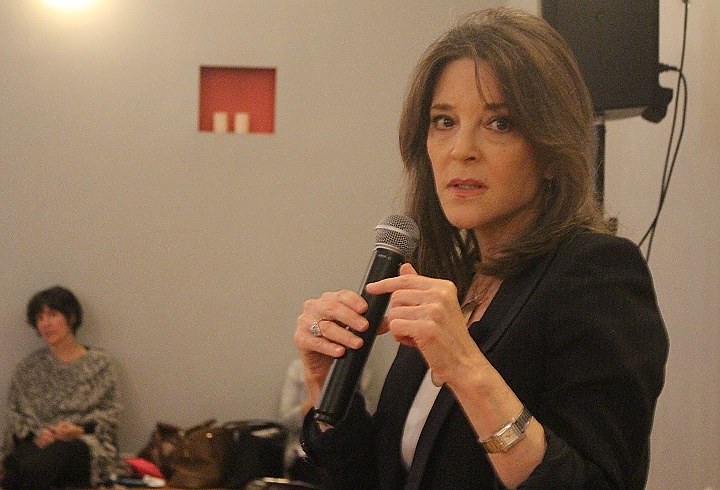 The self-declared outsider candidate and immensely successful spiritualist author has become best known on the presidential campaign trail for promising to harness the power of “love” to defeat Donald Trump. Williamson explained that she very deliberately chose a yoga studio to host her Westville stop. (She also has a keynote address planned before the Yale Political Union later Friday evening.)

To her, she said, the yoga studio embodies a place of self-reflection, metaphorical and literal. She called it a potential source of modern-day spiritual energy similar to that which motivated Quakers and evangelicals to pursue the abolition of slavery in the mid-19th century and to that which propelled religious civil rights icons like Dr. Martin Luther King, Jr. to combat racial segregation roughly 100 years later.

Great injustice has always been best combatted by “people with a sense of conscience” and heightened consciousness, she said. It’s not just an intellectual thing.

“What is happening in this country is so dark,” she warned.

In the Manichean understanding of American history that she proceeded to unspool for the next hour-and-ten minutes straight, the only way to combat darkness is with light. The only way to defeat evil is with good. The only way to overcome oppression is with opportunity.

Williamson offered a variety of promises and proposals for how to ameliorate structural injustice in this country if she were elected president: A new federal Department of Peace (“Our entire defense strategy is the endless preparation for war”). A new federal Department of Children and Families (“We need a massive infusion of resources into our youth”). A World War II-style mobilization against climate change and carbon emissions (“The Green New Deal is in fact only the beginning”). And a new national service program that would require young people out of high school to do some kind of community service or job training in an area of the country in great need (“We need to establish a one-year mandatory national service program to make this season of repair happen.”)

At the heart of her campaign pitch, and at the heart of Friday afternoon’s Westville visit and discussion, was her proposal to begin to heal what she called the foundational injustice that has propped up American life since before this country even declared independence: the enslavement of Africans and the centuries-long expropriation of wealth from their descendants.

“Racism was our original character defect,” she said about the United States.

The best way to fix that, she said, is through monetary reparations to African Americans. She said reparations would follow through on the promise that General William Tecumseh Sherman made when he said that every freed slave after the Civil War should be entitled to 40 acres and a mule.

“Reparations is not a fringe concept,” she said. “It’s not.”

Race-based policies like affirmative action are all well and good, she said, but they “carry no moral force.”

“Reparations carry spiritual power,” she continued, “because they carry an inherent mea culpa.” Not only do they provide actual dollars to those who have been systemically excluded from accumulating wealth in this country, she said. They also provide a sort of spiritual and emotional healing by expressing that the U.S. government is sorry for the historic wrong it has done.

As for the amount of money to be distributed, she said, that is a bit trickier to settle on. No matter what a candidate might propose for reparations, some will always call the number too high, others, too little. 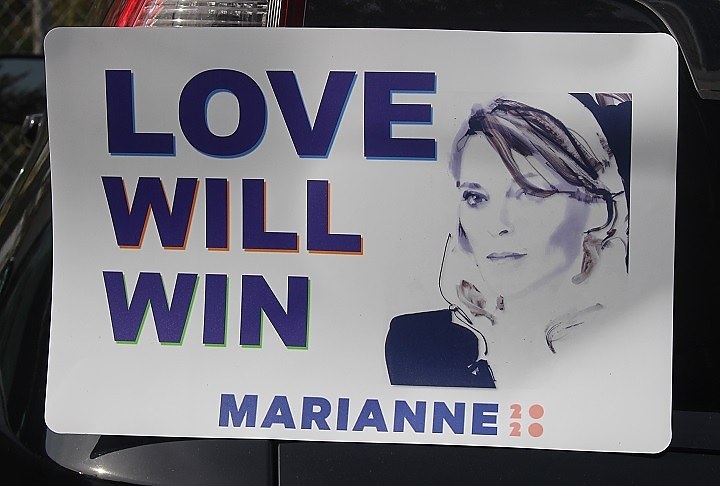 A campaign sign taped to a supporter’s car’s bumper.

“With a vision you must never compromise,” she said. “But politics is the art of compromise.”

The compromise that she has settled on, she said, amounts to this: $500 billion paid out over the next two decades to the roughly 40 million African Americans who lives in this country today. That money would be distributed by a reparations council consisting of a diverse group of people descended from formerly enslaved Africans. And the money must be used for “educational and economic renewal.”

Beyond that, she said, there are no strings attached. The government should trust the recipients to know best how to spend that money.

“There’s a lot of power in reparations,” she said. “Race-based policies: they give justice, but they do not give power.” And in order to have true power in this country, said, you first need to have wealth.

“I want to end this aberrational chapter of American history,” she said. Reparations, she promised, would do just that.

After she finished her speech, she took questions from the crowd.

Why only $500 billion? asked New London resident Roland Dunham. That’s just a drop in the buck of the amount of wealth that African Americans have lost out on over the centuries through everything from slavery to redlining.

“We don’t want to get lowballed,” he said.

Williamson said she recently increased her reparations campaign pledge from $200 million to $500 million over two decades.

“My gut says that we could get $500 billion,” she said. And better to support the candidate who has an actual dollar amount for this project, she said, than one who wants only to study the issue.

But even if you do win the presidency, another supporter asked, how will you get such radical social welfare programs through a conservative U.S. Senate likely still led by Kentucky Republican Mitch McConnell?

In one of the many maxims she quoted over the course of the campaign stop, she ended with one that she disagreed with.

Former New York Governor Mario Cuomo once said that candidates should campaign in poetry and govern in prose, she noted.

“That was a really stupid line,” she said. “You should never give up on the poetry.”

This story first appeared Oct. 25, 2019, in the New Haven Independent.