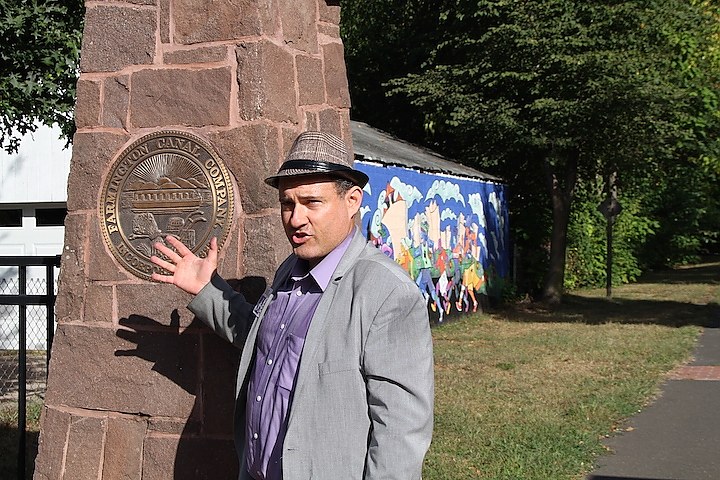 Aaron Goode stands beside the Farmington Canal, a few block from where he was hit by a truck in 2018.

Aaron Goode had been lulled into a false sense of complacency the day he got hit by a truck. He’d been riding his bike on the Farmington Canal Trail, as he had countless times before, when he came to a spot in Hamden that intersected with the road.

A car braked to let him cross, but the truck driver, not seeing Goode, attempted to go around the stopped vehicle. Luckily, the driver pumped the brakes before striking the cyclist, sparing him a full-speed impact.

“It’s kind of a game of inches. If I had gotten there a split second sooner, I could have been killed,” the 37-year-old Goode recently recalled, a year after the accident.

Goode is a member of Elm City Cycling, a community of bicycle advocates who are fighting to make Connecticut streets safer. Several of his peers joined him in voicing their concerns to some of the most powerful members of the state’s justice community: the Criminal Justice Commission.

“This is a major crisis. It’s a public health epidemic.”

The commission held a public forum in mid-October to gauge what qualities it should look for when appointing Connecticut’s next chief state’s attorney. Many see the search as an opportunity for Connecticut to make even further strides on  criminal justice reform and cut down on prison populations and racial disparities in the state’s justice system.

There also is significant public interest in a chief state’s attorney who makes the roads safer for pedestrians and cyclists.

Of the 32 written comments published as public testimony to the Criminal Justice Commission as of Oct. 23, five suggested the next chief state’s attorney enforce traffic safety laws and to take steps to “end traffic violence.”

“It comes down to recognizing the scope and severity of the problem. This is a major crisis. It’s a public health epidemic,” said Goode, a New Haven resident who bikes almost every day.

Pedestrian and cyclist fatalities hit a 28-year high in 2018, and Connecticut has the highest pedestrian fatality rate of all New England states. In 2016, it ranked 20th in the National Highway Traffic Safety Administration‘s listing of states’ pedestrian fatality rates. There was a 53% increase in pedestrian deaths in the first half of 2018 compared to the previous year.

“There is so much red-light running and speeding, just drivers not obeying traffic laws. It’s a serious offense that’s putting lives at risk.”

Public officials are aware of the problem. Abigail Roth, alder for New Haven’s Ward 7, said in her letter to the commission that, besides taxes, the complaints she hears most from her constituents are about traffic safety.

“There is so much red-light running and speeding, just drivers not obeying traffic laws,” Roth said in an interview. “It’s a serious offense that’s putting lives at risk.”

Connecticut has a bifurcated system of handling motor vehicle violations. Most infractions, offenses for which the only penalty is a fine, are initially screened by the Centralized Infraction Bureau (CIB). These breaches of state law include speeding, cell phone violations, and running a red light or a stop sign.

Drivers who plead not guilty could have their cases sent to the local jurisdiction in which the infractions occurred. The state’s attorney for that jurisdiction then decides whether to pursue prosecution.

Those who plead not guilty to an infraction can request to adjudicate their cases online, said Stacey Manware, the CIB’s deputy director. The remote adjudication allows prosecutors to more carefully assess the facts of each case and can look at driver history and details of infraction.

“There’s more information available to them to prosecute,” Manware said, noting that her office worked with the chief state’s attorney to develop the online program. 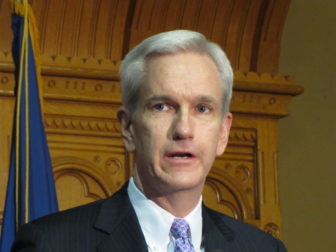 “The chief state’s attorney has a leadership role in trying to build consensus among all of the state’s attorneys about how to best to utilize the resources of the division, and to address the most pressing issues of public safety,” said Supreme Court Justice Andrew McDonald, chair of the Criminal Justice Commission. “That is typically focused on the most violent crimes within the state, or within the ones that pose the greatest threat for recidivism that would endanger public safety.”

One other role of the chief state’s attorney is to advocate on behalf of statewide prosecutors and lobby the legislature to make policy changes that enhance Connecticut residents’ well-being.

“I guess there is debate that could be had whether prosecutors could take a more proactive posture in the prioritization of policing, or a more reactive model of handling whatever is given to them by local and state law enforcement agencies,” said McDonald.

Lawmakers passed a bill during the last legislative session that allows drivers to be fined up to $1,000 if they cause substantial bodily harm to a pedestrian, highway worker or someone riding an analog form of transportation like a bike or skateboard. Roth encouraged prosecutors to use tools like this to discourage reckless driving.

“The idea is not to be throwing people in jail, but to change behavior,” she said.

The chief state’s attorney could mandate drivers who repeatedly commit dangerous offenses to complete a special program, for instance, or create a special vehicular crimes unit to investigate the problem and collect data that can be used by transportation researchers and analysts. Or they could appoint a liaison to work with the Department of Motor Vehicles to explore how dangerous drivers could be taken off the road, perhaps through a denial of a registration or license renewal.

Five pedestrians were killed in New Haven last August alone. Goode said their legacies can be honored by appointing a chief state’s attorney who is cognizant of the violence taking place on his city’s streets.

“We need to do something in their memory,” he said, “and also for all the people who are still here, and who are using our streets every day.”