Teachers report mold, rodents, and excessive heat in schools are making them, their students sick 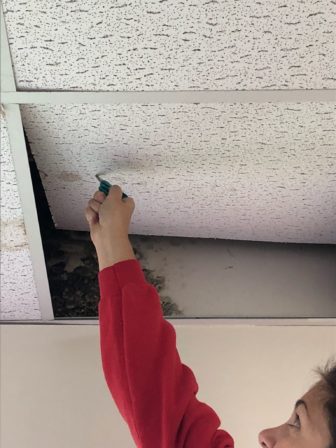 Black mold growing behind ceiling at Westover Magnet Elementary School in Stamford. The school was closed because of mold last year.

Ruth-Terry Walden, a Stamford teacher, was out of work for much of last year because the mold at Westhill High School was causing such severe respiratory symptoms her doctor ordered her to stay home until the problem was remediated.

This fall, Walden said, the problem has been resolved somewhat, but is far from completely fixed. She keeps an air purifier in her classroom, takes several medications for breathing problems and avoids certain rooms like the auditorium, which she said is “full of mold.”

“We need to come out of that building. There is no question that the building is not safe,” Walden said, adding that she is frustrated the district has not shut down the school yet.

Walden, an English teacher, is one of the more than 1,200 teachers who participated in a survey conducted by the Connecticut Education Association, the state’s largest teachers union, about their work environment. The teachers reported getting sick from mold and other environmental hazards, including rodent droppings, extreme heat and cold, dust, asbestos and more.

“From Stamford to Manchester and towns in between, teachers have been reporting illnesses related to environmental issues in their schools,” said CEA President Jeff Leake.

“The problem has grown so pervasive that many teachers are forced to go out on leave,” the report said, “and students are being sent home sick when they get overheated due to the extreme heat and humidity in the classroom.” 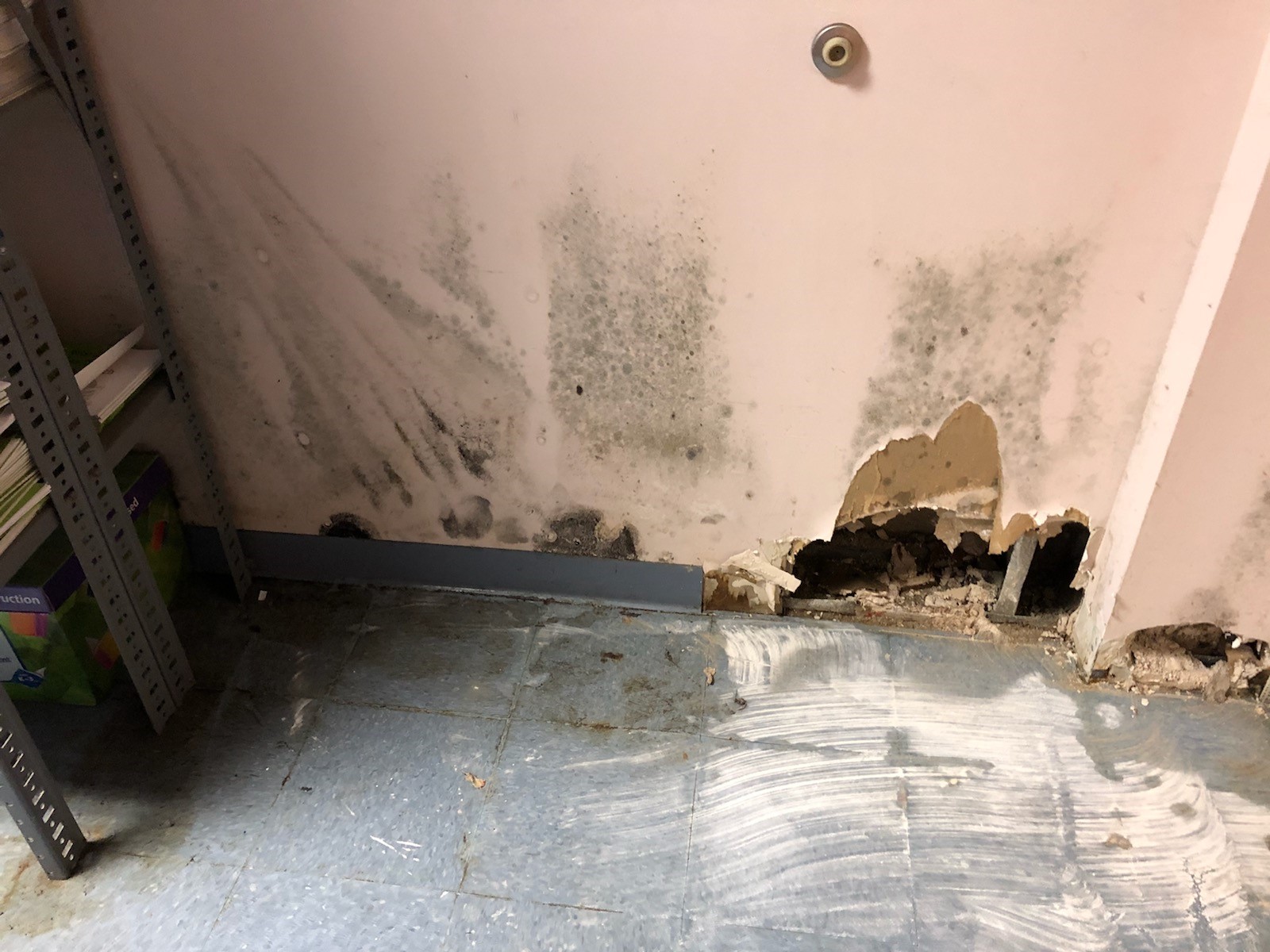 A damaged wall at Westover Magnet Elementary School in Stamford.

Teachers described school building disrepair such as “water seeping up through floors, pouring down windows, and flooding classrooms when it rains; they also reported moldy, stained, sagging and broken ceiling tiles.”

“We have an epidemic on our hands with respect to remediation and renovating existing buildings,” said Melanie Kolek, legal counsel to the CEA. “Schools generally have a 20-year lifespan before they need a renovation. We’re finding these schools — in 50, 70, 80 years they haven’t had their [heating, ventilation and air conditioning] systems upgraded. They haven’t had the venting cleaned. There’s lots of things going by the wayside because they’ve got four walls and a room and we’re seeing the consequences of that.”

“We don’t want kids walking into schools thinking they are going to get sick that day because of mold infestation or rodent droppings. There has to be a safe place for kids to go, for our teachers to teach.”

Kolek said the union will be seeking legislation in 2020 to ensure that renovations are conducted in a timely way to prevent some of the issues that have occurred.

“A lot of people in our community don’t understand that they may be sending their kids to a school that is in significant need of repair and could be causing them illness,” Kolek said. “We don’t want kids walking into schools thinking they are going to get sick that day because of mold infestation or rodent droppings. There has to be a safe place for kids to go, for our teachers to teach.”

Kolek said 50 teachers at Westhill High have contacted her because they are experiencing symptoms such as wheezing, coughing and feeling dizzy. 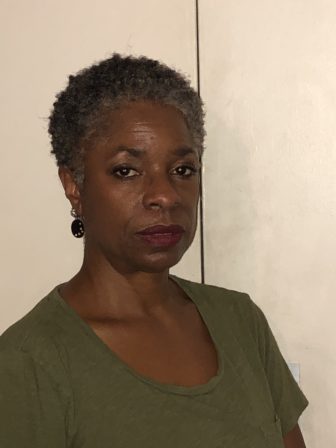 Ruth-Terry Walden, who teaches at Westhill High School in Stamford, didn’t work for most of last year because of a respiratory illness caused by mold at the school.

Walden said the problem at Westhill became especially acute in the fall of 2018 because the previous summer was particularly hot and humid.

“As a result of the humidity, the mold grew exponentially,” she said. Within a matter of a few weeks, she said that she and other teachers were experiencing headaches and respiratory issues.

She went to see her doctor, who told her she was pre-asthmatic and said she needed to get out of the building.

Tamu Lucero, superintendent of Stamford Public Schools, was not  immediately available for comment Tuesday afternoon, but the district issued a statement from her about the mold and water intrusion problem.

“Unfortunately, we have had to identify and address issues that have either been ignored, or gone unnoticed, for decades. With the overwhelming support of our staff, all of the Stamford boards, the mayor, our families and our community at large, we have made miraculous strides in a relatively short period of time. We acknowledge our work is far from completed. We will continue to work together to bring our facilities up the same high standards as our educational offerings.”

State education and school building officials also could not be reached for comment Tuesday afternoon.

Patrice McCarthy, deputy director and general counsel of the Connecticut Association of Boards of Education said, “It is critical that school districts have the state and local resources necessary for building maintenance and renovations. School boards are forced to prioritize projects based on the resources available. The health and safety of students and staff is a paramount concern.”

The report did not include a school-by-school or district-by-district listing of environmental issues. 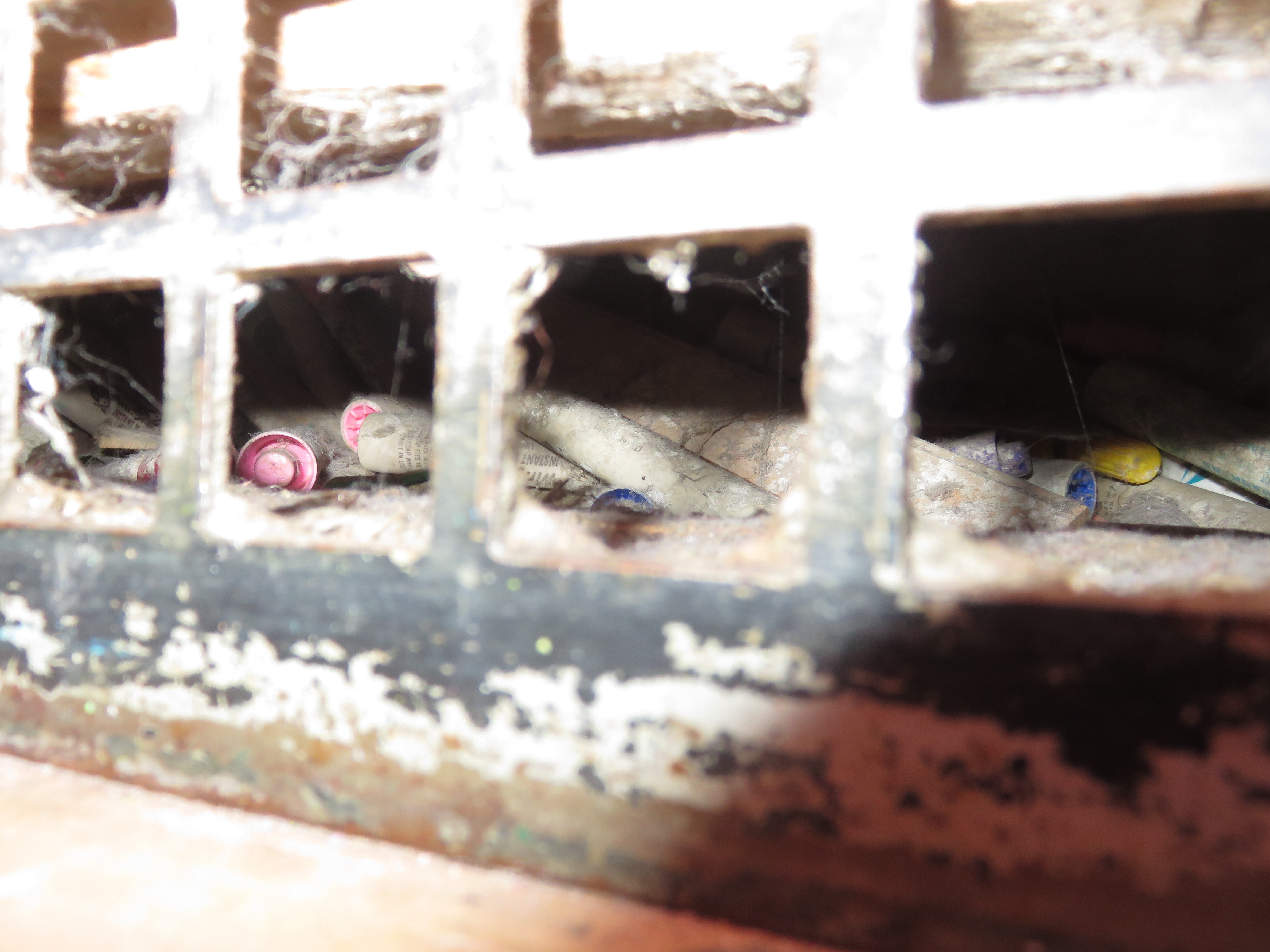 Used pens and other garbage can be seen through the vent in a Ridgefield school.

More than half — 53% — of teachers responding to the survey reported environmental conditions in their classrooms that make teaching and learning difficult.

The survey said that 40% of teachers reported the problems to their school administrators, but the issues were either not resolved or only partially resolved. Only 29% of those responding said the problems they reported had been fully corrected.

One teacher said of the rodent infestation: “Mouse urine and feces in the classroom, including on our carpets. Sticky mouse traps under the radiators with mice sometimes stuck inside and squealing. Mice move along the radiators while students are in the classroom.” Another said: “Finding feces on my desk and all over my Pre-K classroom where students work and play is unacceptable.”

The survey also found that in the warmer months, the classrooms get very hot, sometimes as high as 85 or 100 degrees.

“Excessive heat in the classroom is not just uncomfortable; it is dangerous,” said Leake, the CEA president. “Excessive heat can lead to heat stroke, heat exhaustion, and dehydration and can cause greater health risks for those who suffer from asthma, allergies, and other health-related conditions.”

The report said that a University of Tulsa study found that lower classroom temperatures and improved air ventilation improved learning ability and student performance by as much as 10% to 20%, while math scores rose 2.8% when temperatures fell from 78 degrees to 67 degrees.

Gary Peluchette, president of the Bridgeport Education Association, said that he hears from teachers how “incredibly hot it gets when the warm weather hits.”

“We have 38 schools and only half of them have air conditioning — that’s a big part of it,” he said. He said that one classroom in Bridgeport hit 108 degrees.

“This is public school, not duty in Iraq,” Peluchette said.

“This is public school, not duty in Iraq.”

Peluchette said the district has no money to address these problems.

“Improvements are minimal,” he said. “There are bandaid solutions they are doing. The legislature looks the other way when it comes to Bridgeport.”

Michael Testani, Bridgeport’s interim superintendent, could not be reached for comment Tuesday.

Leake said dogs are treated better than students when it comes to heat. “Kennels have maximum temperature limits,” he said, “but there are no laws or public health codes in Connecticut regarding excessive heat in school buildings, and that must change.”