First two flu-related deaths of the season reported in Connecticut 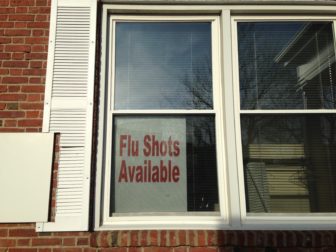 Residents are urged to get vaccinated against the flu.

Two Connecticut residents over the age of 65 died of flu-related complications last week, the first deaths of the season, health officials reported Thursday. One person lived in Litchfield County and the other was from Fairfield County.

Since August, 47 people in the state have been hospitalized with the disease. Flu season runs from October to May, with the most cases typically recorded from December to March.

During the last fiscal year, which ended in July, 3,506 residents were hospitalized with the flu and 88 died.

Health officials are urging people to get vaccinated against the disease. Adults and children who are healthy can still get sick from the flu, they said.

“I advise all Connecticut residents to take the proactive step to protect their health during flu season by getting a flu shot,” Health Commissioner Renee D. Coleman-Mitchell said. “Flu vaccines are safe and effective, and can either help prevent you from becoming infected by this serious virus, or help lessen your symptoms if you do get sick.”

Nationwide, an estimated 48.8 million people got the flu in 2017-18, the most recent data available. That year, 959,000 people were hospitalized – the highest number since 2009 – and 79,400 people died, according to the Centers for Disease Control and Prevention.

The CDC is encouraging anyone older than six months to be vaccinated. High-risk groups, including children from 6 months to 18 years of age, women who are pregnant during flu season, people 50 and older, and people living in nursing homes and long-term care facilities are especially urged to get immunized.

Residents 65 years and older should get a flu shot instead of a nasal spray vaccine, health officials said.

To find a flu clinic, visit the HealthMap Vaccine Finder at https://vaccinefinder.org/