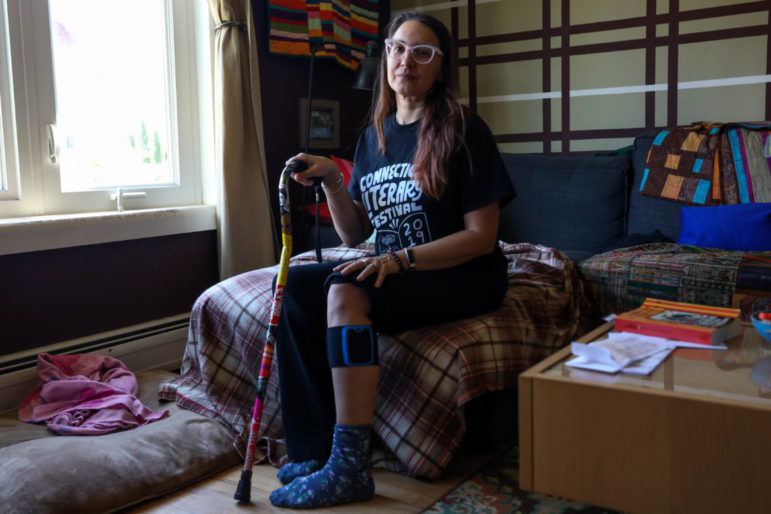 Sonya Huber, 48, suffers from rheumatoid arthritis. She says on some days she needs a cane to help her walk because of the pain in her joints. Wednesday, Nov. 06, 2019. (Photo by Carl Jordan Castro)

Unable to obtain morphine, Heather Weise, 50, lay balled up in pain at her home in Milford earlier this year. It took nine days to refill her narcotic painkiller and she blamed the clampdown on opioid prescriptions for her woes.

“My pain’s up there with cancer,” said Weise, an administrative assistant at the sandwich-chain Subway. “I almost ended up at the ER.”

Weise suffers from adhesive arachnoiditis, an inflammation of membranes surrounding the brain and the spinal cord, for which she was prescribed a daily dose of 120 milligrams of the opioid painkiller morphine. When her prescription ran out in the stipulated 30 days for refills, she had nowhere to turn to for relief. Her doctor appeared reluctant to renew the medication and to go to bat for her with her insurer, she said.

In the wake of the opioid epidemic, doctors are writing fewer prescriptions, following guidelines from the Centers for Disease Control and Prevention (CDC) issued in 2016, and a Connecticut law that took effect also in 2016, requiring the daily reporting of opioid prescriptions into the state’s Prescription Monitoring Program database.

Prescribing rates for opioids in Connecticut fell from 2.5 million prescriptions in 2016 to 1.9 million in 2018, data from the state Department of Consumer Protection show. The percentage of refills dropped to 13.6% in 2018 compared to 17% in 2016, per the data.

Now, even with new federal guidelines urging doctors to exercise caution when tapering opioid medication, some practitioners are concerned that patients who may need opioids are not getting them.

“Patients have been caught in the crossfire,” said Dr. William Becker, associate professor at the Yale School of Medicine, who runs an opioid reassessment clinic. He pointed to the “logistical nightmare” that prescribers now face to obtain prior authorization from insurance companies to get the opioid prescription covered.

“Prescribers who might want to continue to prescribe if they believe the benefit outweighs the harm [on a case-by-case basis] give up because it’s just more hassle than it’s worth,” Becker said.

Patients with chronic pain make up an estimated 20.4% of the U.S. population, the CDC reports.

Huber has rheumatoid arthritis. An opioid analgesic used to help with the pain but she says she got off narcotics after experiencing relentless “patient-shaming.” One specialist accused her of popping “too many pills” when she was taking just one, Tramadol. And last year, Huber was tested at her primary care physician’s office for illegal drugs. “I came home crying,” she said. “Once a doctor thinks you might be seeking pain pills, the conversation kind of shuts off.”

Unable to find a doctor willing to treat her with opioids, and one with whom she felt she could develop a relationship of comfort and trust, Huber turned to cannabis oil and electric pulse therapy. “During the periods when I’ve been on opioids, I had windows where I experienced no pain or functional limitations. And that’s lovely, just as a break,” she said. 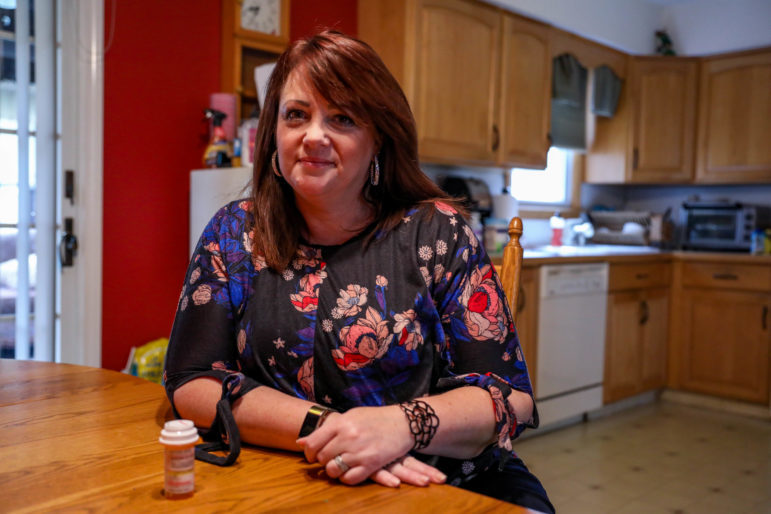 Heather Weise, 50, in her Milford home. While getting ready for work Weise says she takes morphine to help quell the pain she feels from adhesive arachnoiditis. Thursday, Nov. 07, 2019. (Photo by Carl Jordan Castro)

But some people should never have been prescribed opioids in the first place, experts say: They did not have cancer, did not require palliative care, and were not in chronic pain. Yet teens, for instance, are continuing to get prescriptions for menstrual pain and headaches, according to research by Julie R. Gaither, PhD, an instructor with the Department of Pediatrics, Yale School of Medicine.

“Studies for teens who have misused opioids show that in 40 percent of those teens, their own prescription is the source,” Gaither said.

Connecticut had a total of 948 opioid-related deaths in 2018. Of those, 760 were related to fentanyl, a synthetic opioid procured seemingly easily in the streets. The total number of overdose deaths in 2018 was 1,017.

Among the state’s fatal overdose statistic is Kyle Hufnagle, an RV technician at Campers Inn in Union, who died in 2016 at the age of 29 after struggling with mental illness and drug use for years. “Our whole family didn’t realize there was a problem until he had gone past [prescription] pills to the illegal stuff,” Kerri Wojcik, Hufnagle’s sister, said.

Meanwhile, families of victims are exploring ways to prevent addiction.

Dita Bhargava of Cos Cob, a financial executive who was a candidate for state treasurer, lost her stepson, Alec Pelletier, on his 26th birthday last year to a fatal overdose of fentanyl. A triple-A ice-hockey player, Pelletier was diagnosed with bipolar disorder and depression in his teens.

Bhargava said it’s important for students to learn resilience and coping mechanisms early on to help deal with stress and anxiety. She is now working on introducing A Life-skills Education Curriculum (ALEC) in Connecticut schools as a focus on prevention.

Physicians overseeing the state’s Medical Marijuana Program have recommended adding chronic pain for those 18 and over to the list of debilitating conditions for which patients can qualify for medical marijuana. The inclusion is contingent upon approval by the Regulations Review Committee of the Connecticut General Assembly.

This story was first published Nov. 10, 2019, by the Connecticut Health Investigative Team.