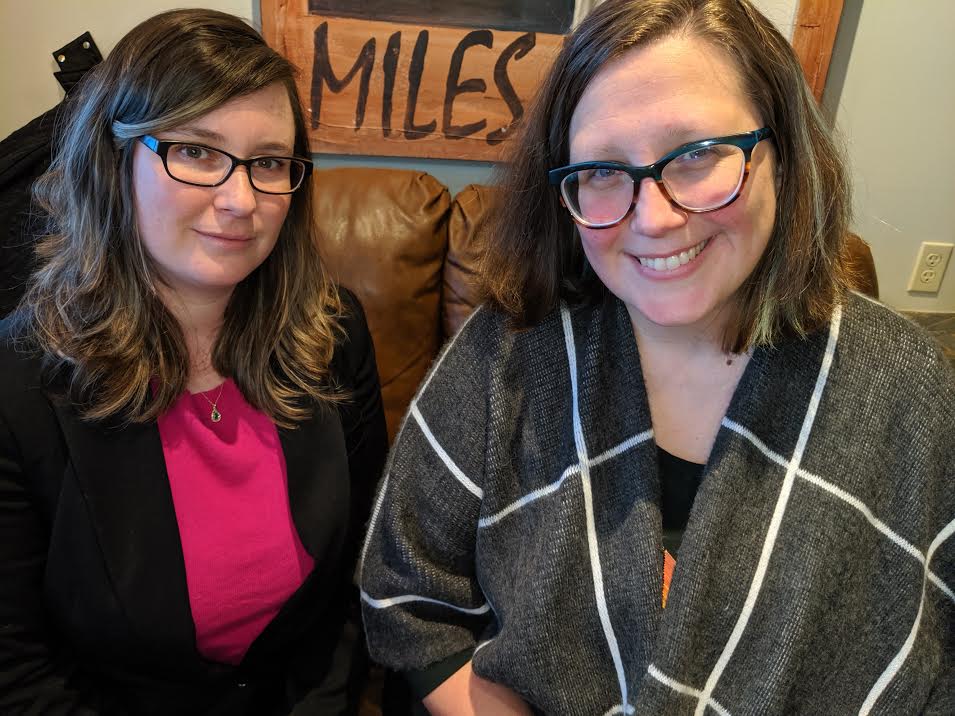 Sarah Hernandez, right, has filed suit against the Enfield Board of Education alleging she was discriminated against because of her disability. She was photographed at the Baker and the Brew restaurant in East Windsor with her lawyer, Kasey Considine of Disability Rights Connecticut.

A former member of the Enfield Board of Education who is autistic has sued the school board and the town for discrimination under the Americans with Disabilities Act, alleging that the board did not provide her with the accommodations she needed to function as an effective member of the board.

Sarah Hernandez, who her lawyers believe is one of the first openly autistic people in the nation elected to public office, contends in the suit filed Tuesday in U.S. District Court that the board “failed to take steps to ensure effective communication” and as a result “denied her an opportunity equal to that afforded to non-disabled board members.”

Hernandez who was elected in 2017 and served a two-year term through November, 2019 has autism, is hard of hearing, and has auditory processing disabilities.

In an interview Wednesday, Hernandez said that after the last presidential election, “I realized how important it was to have diverse voices represented in government at all levels and that we didn’t deserve to be just consulted on an issue, but that we really deserved to have a seat at the table.

But Hernandez, who is also an assistant professor of occupational therapy at Bay Path University and has three children, said the board never consistently provided her with the accommodations she needed to be able to listen to and understand all that was going on at the meetings.

Eve Hill, a Washington-D.C.-based attorney who along with attorney Kasey Considine of Disability Rights Connecticut is representing Hernandez, said, “There is no reason not to have provided these accommodations. They are not expensive, they are not hard. I don’t understand it.”

With her disabilities, Hernandez has difficulty hearing and understanding telephone conversations and in-person conversations unless she gets written materials, can see the speakers and can take notes. She asked the board to communicate with her between meetings in writing, such as by email and text, and to provide written materials at the meetings. She also asked for a white board so she could take notes during executive sessions and then erase them as board members were not allowed to leave the sessions with written notes.

Hernandez contends that although the board agreed to those accommodations, board members repeatedly refused to follow through, insisting on communicating by telephone between meetings and refusing to provide written  information or a white board for executive sessions.

Hernandez filed the suit  under the Americans with Disabilities Act, which requires state and local government agencies to provide equal access to people with disabilities, including the provision of “reasonable accommodations” and “auxiliary aids and services” when needed.

The suit provides examples of the board’s alleged failure to provide those accommodations to Hernandez and its insensitivity to her needs.

In one instance, the suit says, board member Tim Neville attempted to engage Hernandez in extensive verbal communication, even though she reminded him that she preferred written communication. In January, 2018, despite her request to the board to communicate by text or other writing, Neville contacted Hernandez by phone.

“During the call, Mr. Neville refused Ms. Hernandez’s request to engage with her through written communications and proceeded to chastise her for asking too many questions as a member of the board,” the lawsuit say.

The suit says the call lasted an hour and resulted in Hernandez being unable to “process its contents and in physical pain due to sensory dysregulation.”

Neville — who resigned recently from the board, according to published accounts — could not be reached for comment Wednesday.

In March, 13, 2019, the suit says Hernandez met with Kruzel and Superintendent Chris Drezek to discuss communication accommodations and they agreed to provide her with written documents for board executive sessions. At a meeting later that month, however, Neville chastised Hernandez, the suit alleges, and informed her that she was not entitled to written communication.

During an executive session on June 19, 2019, the suit further alleges, board counsel Christine Chinni began to discuss Hernandez’s communication needs in the presence of the entire board. Chinni said the board would no longer honor her communication accommodation needs, the suit says, and instructed other board members to speak to Hernandez only in public and to share no privileged information with her.

The suit says Hernandez was not able to fully comprehend Chinni’s verbal communication at the June 19 meeting and believed that she had been removed from the board. She immediately left the meeting, the suit says, and experienced a panic attack before reaching home.

Hernandez said Wednesday that because of how her brain functions, she is much better able to understand the substance and context of a conversation if she sees written words.

“For example, if I’m watching television, everybody sounds like the Peanut’s teacher,” Hernandez said, referring to the unintelligible sounds adults make in those shows, “until I turn on close captioning and then I hear them just fine.”

Hernandez said an intense conversation can cause her sensory system to become overloaded, resulting in symptoms similar to trauma and provoking a fight or flight response.

“It feels like, and I’m not exaggerating, a dagger of lightning piercing through my brain,” Hernandez said. She said she’s had times when she’s feeling this way that even a whisper can cause her to whimper with pain.

Since her election to the board, the suit says, Hernandez has experienced “tremendous physical, mental, and emotional suffering as a result of the board’s refusal to reasonably modify their procedures, to provide her with effective communication, and to accommodate her.”

As a result, the suit says, she has experienced sensory dysregulation that has left her unable to communicate verbally, caused increased  anxiety and depression, and forced her to miss work and undergo hospitalization and increased therapy.

Hernandez is seeking an injunction prohibiting the board from violating the ADA as well as lawyer’s fees and compensatory damages.

Hernandez, who also advocates for people with autism, only learned that she was autistic as an adult when she was seeking treatment for her son, who is nine-years-old and also autistic. She said that as she learned about the symptoms, she realized they also applied to her.

She said she filed the suit because she could.

“I had the resources. I had the connections. I have a support system. My fear is that somebody else on the [autism] spectrum or any disabled person — I don’t want them to go through this,” she said.” People need to know that they deserve accommodations, how to get those accommodations, and who to go if those accommodations aren’t being met. I spent the last two years trying to figure that out.

“I believe the universe provides opportunities and this is an opportunity for me to just clear the way for the next person, clear the way, maybe, for myself later on.”

After she gets her Ph.d, which is near completion, Hernandez said she might run again for office..

6 thoughts on “Former Enfield school board member with autism sues board, claiming discrimination”