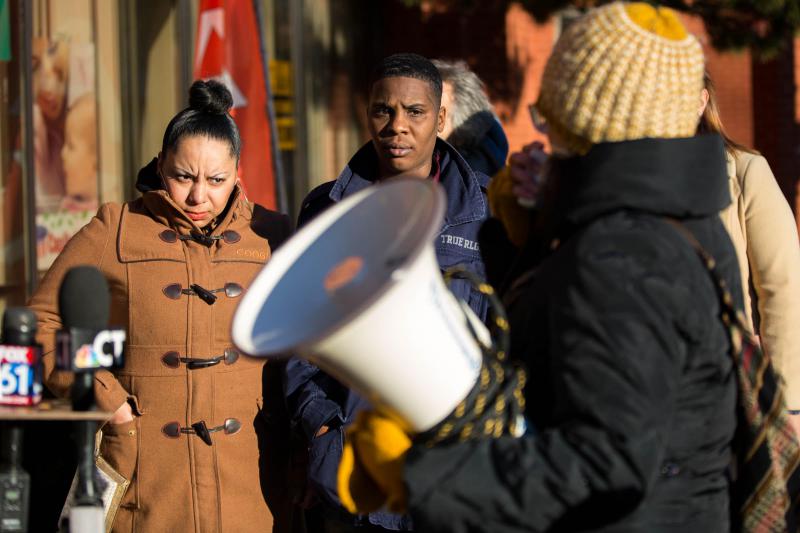 Wayzaro Walton (center), at a rally organized on her behalf in Hartford in December 2018, was apprehended by federal Immigration and Customs Enforcement agents on March 26, 2019 while participating in an immigration check-in.

The federal Board of Immigration Appeals has indicated it will now recognize pardons issued by the state of Connecticut, according to the attorney for a Hartford woman previously threatened with deportation.

Wayzaro Walton has been fighting a removal order since 2012. Her attorney Erin O’Neil-Baker said Monday she received word that the proceedings against her have been terminated.

Walton came to the U.S. from England when she was four years old and lived legally in Connecticut as a permanent resident for most of her life. In her teens and 20s, she had a string of arrests for non-violent offenses including larceny and conspiracy to commit larceny.

She became a target for Immigration and Customs Enforcement, and in March of this year she was detained. One day after her detention, Connecticut issued a full pardon for her old offenses.

But Monday, O’Neil-Baker received notice from the Board of Immigration Appeals that her case has been reopened, and the removal proceedings terminated.

“I’m overwhelmed, I’m stunned,” O’Neil-Baker said. “We are so happy and it’s such a clear message from the Board of Immigration Appeals that it’s better than expected. That not only is the case reopened, but Wayzaro is going to get her permanent residency back.”

The decision is also expected to affect another Connecticut-related case, that of Richard Marvin Thompson, currently detained in Alabama. He also had received a pardon in Connecticut for previous offenses.

“It’s going to have an impact on immigrants throughout Connecticut who have faced issues regarding pardons in the past,” said O’Neil-Baker. “So it’s not just on Wayzaro’s case, but it can have far-reaching impacts for all Connecticut residents who are facing removal orders and who have pardons. This is life-changing for her.”