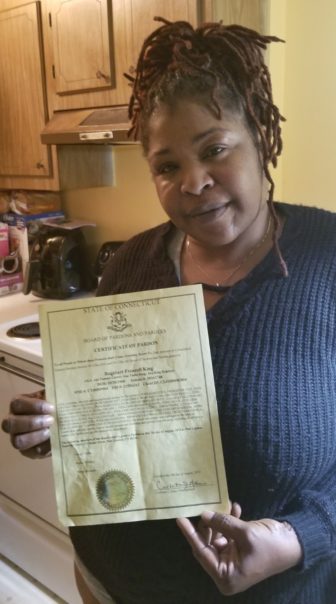 Rogsbert King was shaking as she held the letter in her hand. Ever since the Board of Pardons and Parole had provisionally approved her application a few months earlier, she’d checked the mail three times each day, desperate to know for sure her criminal record had been wiped away.

King was petrified to open the thin envelope, worried the state had found a reason to deny her pardon. She asked her fiancé to do it for her.

“I had tears in my eyes because I couldn’t believe it,” King said, describing the moment last October when she read the paper clearing her of the drug-fueled crimes that drove her to jail a half-dozen times and acted like a scarlet letter when she applied for jobs.

King now works to help others unshackle themselves from criminal convictions that hold them back years after they complete their sentences. During the last legislative session she teamed up with Congregations Organized for a New Connecticut (CONECT) to promote a “Clean Slate” bill that would have expunged people’s criminal records if they remained crime-free for up to five years after serving their sentences.

The measure failed, but there’s hope for this year, especially   since the most politically powerful person in the state will be on their side — Gov. Ned Lamont.

Lamont’s administration is working on a legislative proposal for the upcoming session that would create a process to clear certain criminal records automatically.

“People with criminal records in Connecticut and around the country face a litany of collateral consequences that create barriers to employment, education, and housing,” said Max Reiss, Lamont’s spokesman. “These barriers exist long after their sentences have been completed.”

“People with criminal records in Connecticut and around the country face a litany of collateral consequences that create barriers to employment, education, and housing.”

Marc Pelka, Lamont’s undersecretary for criminal justice policy and planning, said the governor’s team has met with state agencies that would be affected by the new law. They’ve also found a nonprofit to help develop a code to automate the pardoning process.

“It’s truly about providing better futures for people with criminal records,” Pelka said. “A criminal record on its own doesn’t inform someone’s risk of recidivism, and most records remain in place long after people have completed sentences.”

Currently, people with criminal records can apply to the Board of Pardons and Parole to have them expunged three years after the disposition of a misdemeanor, and five years after a felony. The application requires people to have extensive memories of their crimes, and is often so complicated individuals must hire a lawyer to help them navigate the paperwork.

“The current process of applying is so complex and intimidating that a lot of people just don’t do it,” said Matt McDermott, CONECT’s lead organizer.

Last year, the state received 1,857 pardon applications. A little more than half were deemed eligible for application, according to state data. Of those, 77% were granted.

An automatic pardon system would ensure all who are eligible benefit. That, McDermott said, is good news for taxpayers. A 2016 study estimated barriers to employment for formerly incarcerated people cost the U.S. GDP between $78 to $97 billion annually. Based on Connecticut’s percentage of the GDP, that’s a loss of up to $1.2 billion in economic activity each year, according to CONECT.

“Connecticut would be unshackling a potential work force that right now is under-employed and unemployed and not really able to advance into better jobs and longer hours,” McDermott said. “Over time there would be a significant impact, economically, for the state.”

“Connecticut would be unshackling a potential work force that right now is under-employed and unemployed.”

Reiss said an automatic expungement process would free up the Board of Pardons and Parole to focus on more complex cases that require more discretion. That, he explained, could help the state “provide greater equity and fairness while helping address racial and ethnic disparities in the criminal justice system.”

The bill supported by CONECT last year would have automated much of the current system managed by the Board of Pardons and Parole. Lawmakers tweaked the proposal after a public hearing at which people expressed concerns about how certain violent crimes would be handled. McDermott said the revised bill barred those convicted of sexual and domestic violence crimes from the automatic pardon process.

“There might be some technical tweaks on how that carve-out gets done,” McDermott said of the 2020 bill, but “our proposal this year would not relitigate those. It would still carve those crimes out.”

People convicted of sex crimes generally do not reoffend. The Office of Policy and Management released two studies, one in 2012 and the other in 2017, that analyzed crimes committed by sex offenders released five years earlier. Those studies found that 3.6% of people convicted of a sex crime were arrested for another by 2011, and 4.1% were rearrested by 2016. Those numbers are similar to studies conducted in other states, like New York, California and Alaska.

“I see Clean Slate being an anti-discrimination bill that discriminates,” said Cindy Prizio, the executive director of One Standard of Justice, an organization that works to ensure people convicted or accused of sex offenses are treated fairly by the state before, during and after their sentences. “Rather than looking at people as individuals, we’re lumping all these people into the same pot.” 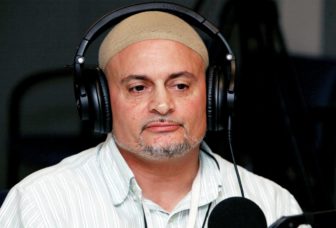 Da’ee McKnight, who works at Bridgeport’s FamilyReEntry and served 17 years in prison for a homicide, cautioned against making people convicted of violent crimes ineligible for an automatic pardon. More than half of those incarcerated across the U.S. are locked up because of a violent crime.

Those convicted of a violent crime are less likely to be rearrested the longer they’re out of jail. According to one federal study, fewer than 2% of this population were rearrested  eight years after they were released from prison.

“A lot of people that haven’t transformed their thinking or their lives, they’re not gonna make it to that five or 10 years” of being crime-free and eligible for an automatic pardon, McKnight said.

The space between what’s deemed “violent” and “nonviolent” is blurred, McDermott said. Nonviolent crimes can have an element of violence, or a person originally arrested for an offense that is deemed “violent” could plead out to a lesser charge not considered violent.

“There’s honestly no hard, defined red line between what’s a violent offense and what’s not,” he said. “I think we’re thinking about lower-level felonies and misdemeanors in the way we’re articulating it this year. “

It’s too early to say what will or won’t be in the bill. Pelka said the next steps are to determine the potential scope of the policy and look at states like Utah and Pennsylvania that have passed similar legislation.

For McDermott, a Clean Slate law is an opportunity for Connecticut to advance its criminal justice reforms. If the state is trying to make its criminal justice system more equitable by shedding the tough-on-crime ethos of the past, McDermott said, it’s critical to consider how mass incarceration continues to impact people who have served their time and been out of prison for years.

“That legacy lives on for the people who still have criminal records,” he said, “and will live on for decades to come unless we do something substantial and robust like a Clean Slate policy.”

Such a policy could yield tangible benefits and help people find employment or housing, said Louis Reed, a Connecticut-based organizer for the national organization Cut 50. But perhaps more importantly, a pardon recognizes a person’s humanity, that they are more than their crimes. As Reed said, “It restores a sense of dignity.”