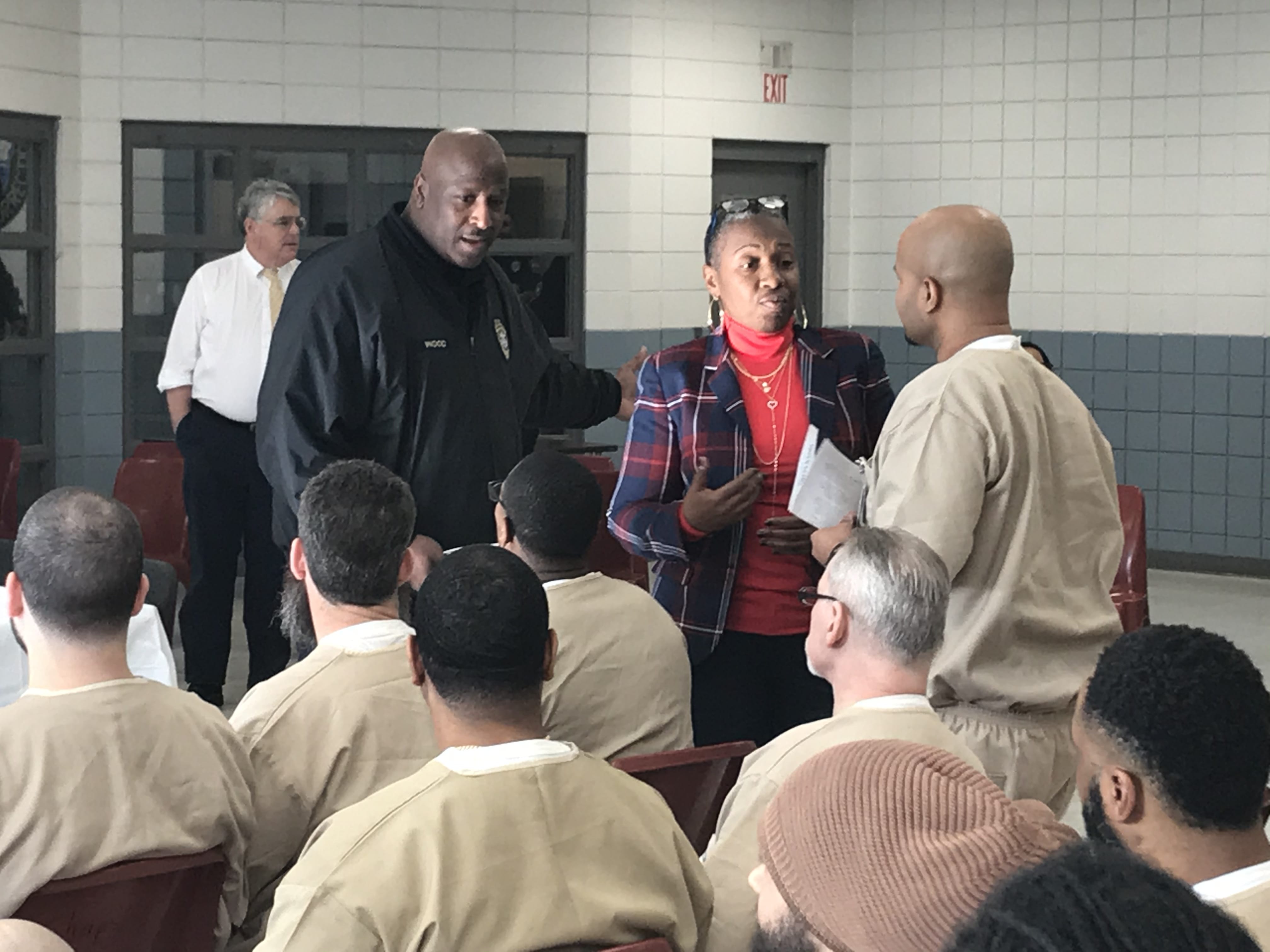 Rep. Robyn Porter talks with an inmate who shared his experience with the council Thursday afternoon. (Photo courtesy of the Department of Correction.)

Somers – Before kicking him off the car dealership property, the hiring manager told Jose — who’d applied for a job there — the fable of the scorpion and the frog, an allegory that cautions the listener to never forget the nature of others. The employer told Jose he viewed him as a liability because of his criminal record.

“I subconsciously resolved myself to the life of a scorpion,” Jose recalled Thursday, more than a decade later. “Until my recent term of incarceration.”

Jose relayed his story Thursday afternoon from inside Cybulski Correctional Institution, where he is currently imprisoned, to members of the Council on the Collateral Consequences of a Criminal Conviction. The council is charged with submitting legislative recommendations by Feb. 1 on how to reduce discrimination against those with criminal records.

According to a national study, those with criminal records face more than 550 barriers codified in state statute that make their lives harder after they’re released from prison.

Thursday’s forum was a part of the council’s research into those forms of discrimination. Members asked those offering testimony to identify themselves by only their first names to ensure anonymity.

“The importance of it, for me, is what I can glean from the story. Not who it is, but what it is,” said Rep. Robyn Porter, D-New Haven. “I don’t want to further stigmatize them by using their full names.”

Each of the 25 men who offered their stories are housed in the prison’s Reintegration Center, which means they will soon be released — some for the first time in decades.

Jose has spent more than 10 years behind bars. During that time he has taken college classes in finance and business, earned a 4.0 GPA, and has been accepted into a national honor society. He plans on opening his own car dealership in New Haven when he is released from prison.

But he still remembers the business owner who told him he couldn’t change his nature.

“That was long ago,” Jose said. “I won’t forget because it motivates me, and it keeps me ready for what I’m going to do in the future.”

Many of the inmates’ concerns were related to housing and employment discrimination. Several men explained how they had been passed over for jobs because of their records, whether through discrimination or because they didn’t have the same skills as people who hadn’t been locked up. Others said they are worried about obtaining life insurance, or getting a commercial drivers’ license when they are out of prison.

Andrew, who has spent the last 29 years in prison, said he is anxious because he’s been incarcerated for so long.

“I have concerns about all the questions, but they apply to a world I have not walked in for a very long time,” he said. “All I can do is pray I’ll be ready to face them with a positive outlook.”

Another man — Louis, from Waterbury — told the council he’d been denied multiple jobs at corporate restaurants, despite having 25 years of experience as a chef. His felony convictions held him back, he said.

“As a recovering addict, it is hard to work in a restaurant that serves alcohol,” he said, explaining it would be better for his recovery to work somewhere that would not trigger a relapse. “I would love to stay in my field and work in a safe space.”

Only five of the council’s 21 members attended Thursday’s meeting. They were Porter; Melvin Medina, public policy and advocacy director of the ACLU of Connecticut; Tiheba Bane, the founder of Women against Mass Incarceration; Arunan Arulampalam, deputy commissioner of the Department of Consumer Protection; and William Murphy, the Department of Correction’s director of programs and treatment.

“I absolutely would have loved to see more of my council members there, especially legislators,” Porter, the council’s co-chair, said. “We write laws that impact the lives of people, and these are some of the most forgotten-about people that we represent. You lose a lot when you don’t hear firsthand from them, out of their mouths, what their experience is, and what their solutions and suggestions are.”

There will be another forum this morning at York Correctional Institution in Niantic, to hear from inmates at the state’s only women’s prison.

Matthew, who is finishing his first stint in prison, said he surveyed his peers before addressing the council Thursday. He told the story of a former banker who lost his career because of a felony conviction. That man turned to independent contracting, but he eventually lost that job, too, because of his record.

Medina told the men he empathizes with them.