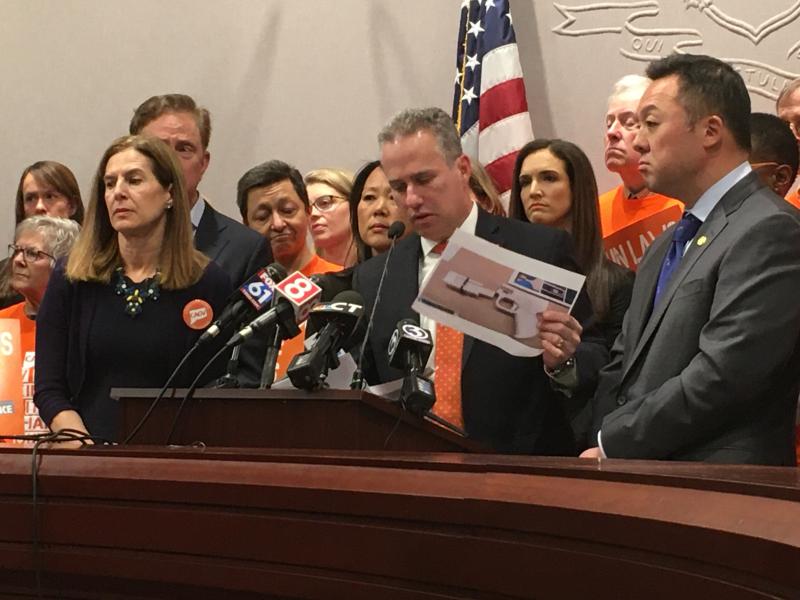 Connecticut Against Gun Violence Director Jeremy Stein holds a photo of a 3D-printed gun. Standing to his right is Attorney General William Tong.

Connecticut’s attorney general says the state will join 20 others in challenging forthcoming Trump administration regulations regarding the online release of plans for 3D-printed firearms.

The White House wants to transfer jurisdiction over the issue from the State Department to the Commerce Department.

The switch in the agency responsible for regulating the firearms could mean print-at-home gun designs will be freely distributed online, which currently is prohibited.

In Connecticut, Democratic state officials want the schematics kept off the internet.

“This is simply insane,” West Hartford State Rep. Jillian Gilchrest said. “Why on earth would we want anyone having access to a plastic gun?”

“It’s nearly impossible once these unserialized and unregistered firearms are made to make sure they don’t fall into the hands of people prohibited from owning or possessing firearms,” Tong said.

In addition, he said, the plastic weapons don’t set off metal detectors.

Second Amendment advocates counter that the weapons still need metal ammunition, which could be picked up by a metal detector.

Cody Wilson, who runs a Texas company called Defense Distributed, has been fighting in court for the right to share the electronic files.

He said plans for printing 3D guns are already widely available online, despite the existing ban on their distribution.

“I think [the] bigger question is where will it end?” said Holly Sullivan, president of the Connecticut Citizens Defense League. “Does it threaten gunsmithing? That is a heritage that should be protected.”

The Trump administration had previously changed the regulations to allow plans to be distributed, but a federal judge later struck down that move.