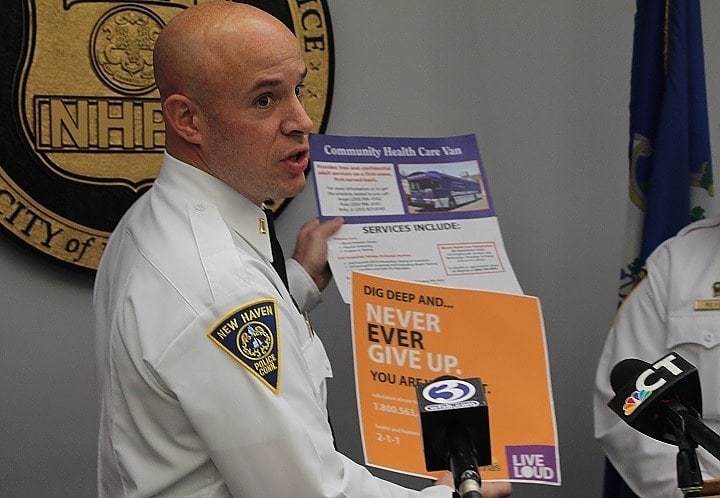 New Haven police have begun distributing free plastic baggies of clean needles, sterile glass pipes, and information about local drug rehabilitation services to those released from the 1 Union Ave. lock-up as part of a new initiative to use “harm reduction” principles to curb addiction.

In addition to this officer training, Marcucio said, the police department is now as of Tuesday morning making available “harm reduction kits” for anyone interested in taking them after they are released from the 1 Union Ave. lock-up.

“We’re not promoting drug use,” Marcucio said. “We’re trying to help them until they’re ready to finally receive treatment.”

Inside these baggies are clean needles, sterile water, burners, cotton, Brillo for filters, a tourniquet, a glass pipe for safe crack use, condoms, and information about community health resources for those ready to start the path towards recovery.

Lawlor (a retired New Haven sergeant) and Marcucio said that those who take the police up on these free harm reduction kits will also have to provide a “unique identification number” that will be shared between the police and the Yale Syringe Services Program.

In addition to the distribution of these kits, police will post informational flyers about the harm reduction program and about local healthcare providers in all 52 cells in the 1 Union Ave. lock-up.

Those flyers will display two phone numbers: 1.800.563.4086, which is the substance abuse treatment 24-7 hotline operated by the state Department of Mental Health and Addiction Services (DMHAS); and 2-1-1, which is Connecticut United Way’s 24-7 general hotline for services ranging from housing to elder care to crisis intervention. 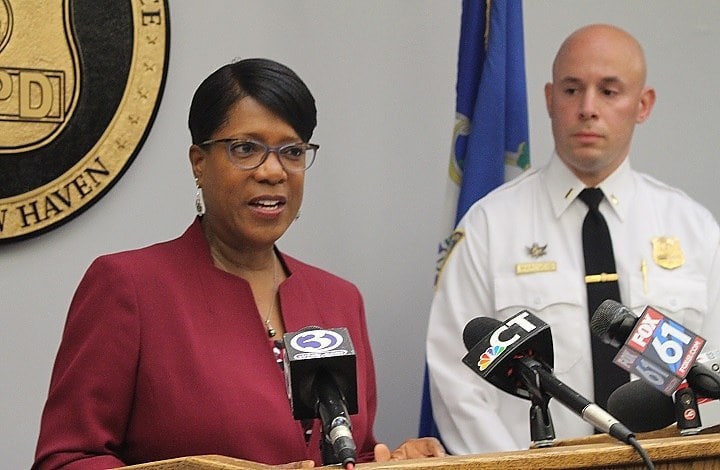 DMHAS Commissioner Miriam Delpin-Rittmon: This is how you address stigma

These flyers will also be posted as street signs on Ferry Street, Chapel Street, and other city hotspots for substance abuse.

“It’s a way to keep individuals safe, to keep them alive, to increase the likelihood that we can connect them to treatment,” DMHAS Commissioner Miriam Delphin-Rittmon said about the core principles of harm reduction.

“The fact that they are disseminating harm reduction kits and information about medication-assisted treatment and other services, that’s one way to address stigma,” she said.

The new harm reduction program comes in the wake of the failure of the city’s Law Enforcement Assisted Diversion (LEAD) pilot, a pre-arrest diversion program that sought to connect low-level drug offenders with addiction services, housing, and job support rather than sending them to court.