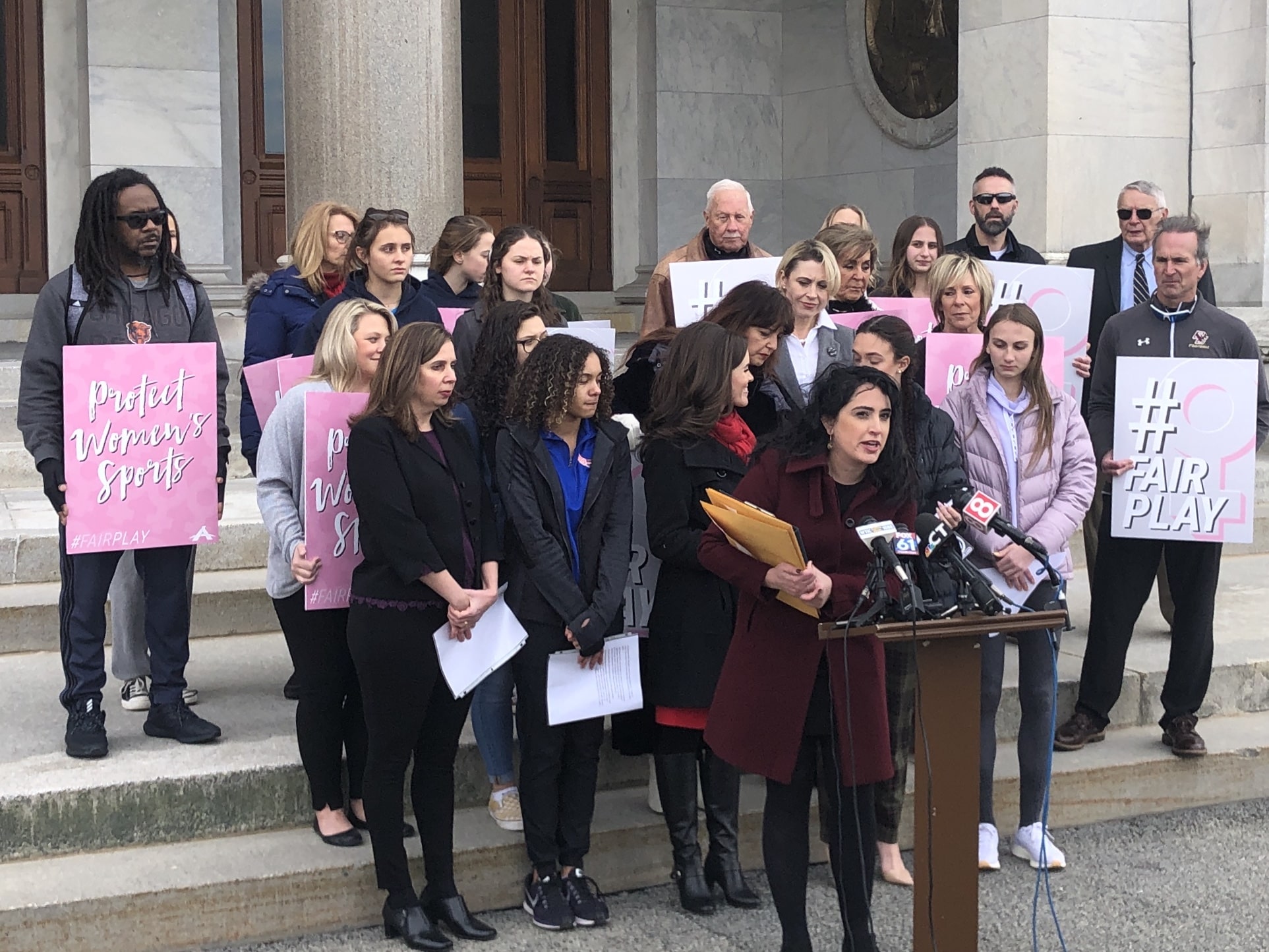 Chelsea Mitchell remembers realizing she was in for a tough race when she lined up to compete in a track-and-field competition last year. As two transgender athletes took their places beside her, the Canton High School senior heard observers chant her name from the stands.

“Then the gun went off, and I lost,” Mitchell said. “No girl should have to settle into her starting blocks knowing that no matter how hard you work, you don’t have a fair shot at victory.”

Mitchell and several others recounted their losses from the steps of the Capitol on Wednesday. The Alliance Defending Freedom, a conservative religious group with cases across the U.S., filed a federal lawsuit on behalf of the students challenging the state’s policy of allowing trans athletes to compete in accordance with their gender identity.

The suit, like the Title IX complaint the group filed last summer, alleges that “inescapable biological facts of the human species [are] not stereotypes, ‘social constructs,’ or relics of past discrimination.” Trans girls have a biological advantage over their cisgender counterparts in girls’ sports, the complaint claims, giving the trans athletes a physiological edge in athletic competitions.

“That biological unfairness doesn’t go away because of what someone believes about gender identity,” said Alanna Smith, a sophomore at Danbury High School and plaintiff in the suit. “All girls deserve to compete on a level playing field.”

Connecticut does not require transgender athletes to undergo hormone therapy to participate in sports, unlike the NCAA or the International Olympic Committee. The girls in the lawsuit claim the policy could rob them of potential scholarships and places in the record books.

“We’ve missed out on medals and opportunities to compete,” said Selina Soule, another plaintiff and a student at Glastonbury High School. “Time is slipping away. Graduation is just around the corner. We won’t be sidelined, and we won’t be silenced.”

Christiana Holcomb, legal counsel for the Alliance Defending Freedom, said the case was not about athletes’ gender identity. “It’s absolutely not about the lifestyle,” she said. “What it is about is fundamental fairness in women’s athletics.”

The ACLU of Connecticut plans to fight the lawsuit to defend the interests of trans student athletes in the state, one of 17 with trans-inclusive athletics policies.

“The language of the complaint, which deliberately misgenders transgender youth and demands that high school athletics be organized by chromosomes, is an assault on the basic dignity and humanity of transgender people and a threat to the privacy and equality of all students,” Chase Strangio, deputy director for Trans Justice with the ACLU LGBT & HIV Project, said in a statement.

The suit specifically names Andraya Yearwood and Terry Miller, two transgender student athletes who are both seniors this year in Connecticut high schools. In a statement, Miller said she has been discriminated against her whole life, and it’s painful for her victories to be attacked.

“So many young trans people face exclusion at school and in athletics and it contributes to the horrible pain and discrimination that my community faces,” she said. “There is a long history of excluding black girls from sports and policing our bodies. I am a runner, and I will keep running and keep fighting for my existence, my community and my rights.”