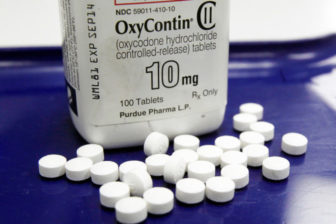 But more significantly, the number of doctors and nurse practitioners who reported receiving payments shrunk by 51%, from 204 to 99.

“I would assume it was the stigma,” said Dr. Arthur Gale, contributing editor at Missouri Medicine. “You can’t pick up a newspaper and not read about Purdue. Even the greatest promoter of OxyContin and narcotics, Dr. Russell Portenoy, is now saying he was exposed to false information.”

Data from the Centers for Medicare and Medicaid Services (CMS) show that a small group of doctors in Connecticut received the bulk of payments during the two years. The top five recipients are Dr. Thomas Pellechi ($747,429), an internist in Greenwich; Dr. Michael Brennan ($41,611), a physiatrist who specializes in rehabilitation medicine in Fairfield; Dr. Howard Hochster ($11,541), an oncologist in New Haven; Dr. Dean Mariano ($10,680), an anesthesiologist in Meriden; and Dr. Lucien Parrillo ($205), an internist in Portland.

Pellechi, employed as a company doctor for Purdue of Stamford while also maintaining a private practice, earned the most of any physician—a total of $1.877 million from 2014 to 2018—more than three-fourths of the $2.24 million Purdue paid out during that period.

“The only conflict of interest is if I overprescribed, and I barely prescribed OxyContin,” he said. A review of the Medicare Part D prescription database showed Pellechi was not listed as a provider. His position with Purdue ended in mid-2019.

Even though individual payments from Purdue dropped sharply, critics argue that some doctors, such as Brennan, took too much. Brennan was paid a total of $150,555 between 2014 and 2018.

“Doctors like Michael Brennan received larger payments because they are in a category called ‘Key Opinion Leaders,’” said Dr. Andrew Kolodny, medical and co-director of the Opioid Policy Research Collaborative at Brandeis University. Kolodny has been a paid expert witness in opioid lawsuits. “Doctors were hearing from [and influenced by] pain specialists like him with a thriving private practice.”

When contacted, Brennan directed an office staff member to refer any questions to a study on the risks of withdrawing from opioids rapidly.

The financial relationships between pharma payments to doctors and their prescribing habits have been scrutinized for years.

A June 2019 study of prescribers under Medicare Part D in the journal Addiction found that “physicians who receive direct payments from providers for opioid prescribing tend to prescribe substantially larger quantities, particularly for hydrocodone and oxycodone.” The study said that doctors who took payments from opioid companies prescribed 8,784 daily doses of an opioid per year in excess of prescriptions made by their peers, who did not receive such payments.

because they are in a category called ‘Key Opinion Leaders.’ Doctors were hearing from [and influenced by] pain specialists like him with a thriving private practice.”

Based on an analysis of Medicare Part D prescriptions in Connecticut, the top recipients of Purdue money had the following prescription rates in 2017, per the latest data: Opioids consisted of 71.91% of Brennan’s 7,202 prescriptions overall; 62.39% of Parrillo’s 2,963 prescriptions; and 9.77% of Hochster’s 133 prescriptions.

Not all doctors who were paid by Purdue were listed as prescribers of opioids in the Medicare Part D database.  Dr. Joshua Hurwitz, a reproductive endocrinologist in Danbury, for example, was paid $2,227 in 2014 for consulting work in the area of women’s health and hormones, but was not listed as a prescriber of opioids.  “This is an example of appropriate physician consulting that has nothing to do with the opioid epidemic,” said Hurwitz.

But there’s no such thing as a free lunch, Kolodny pointed out. “Medical literature show that these small payments influence doctors’ prescribing habits, and that’s why Purdue did it.”

Purdue announced in 2018 that it would no longer send sales reps to doctors’ offices. But state attorneys general, including William Tong of Connecticut, say the damage is done. A lawsuit by the state of Connecticut alleged that a patient taking the lowest dose twice a day for a week earned Purdue $38. But if the patient instead took the highest dose, Purdue made $210—an increase of 450%. To obtain that revenue, Purdue formulated its sales strategy to increase prescribed doses, the lawsuit says.

Purdue’s flagship drug, OxyContin, was launched in 1996 with the highly addictive oxycodone as the single active molecule.  Oxycodone has had devastating consequences in Connecticut.  According to the Connecticut Office of the Chief Medical Examiner, between 2012 and 2019, there were 707 accidental overdose deaths involving oxycodone, though the Office does not indicate how many, if any, of these deaths involved OxyContin.

Deaths from all opioids climbed to 5,790 over the eight-year period, the state reports.

An October 2019 study by Yale University and the University of Connecticut published in the journal Drug and Alcohol Dependence found that overdose deaths from opioid use in Connecticut doubled in the last six years as a result of fentanyl and polysubstance abuse.

Findings such as these could explain why a drop in prescriptions alone doesn’t tell the full story. “There are a lot of pathways to addiction,” said Dr. Gregory Shangold, an ER physician in Willimantic.

CORRECTION: An earlier version contained incorrect information concerning Dr. Joshua Hurwitz.  He was not listed as a prescriber.  He was paid $2,227 for consulting work in the area of women’s health and hormones. C-HIT apologizes for the inaccuracy.

This story was revised from an earlier version.

This story was first published Feb. 19, 2020, by the Connecticut Health Investigative Team.