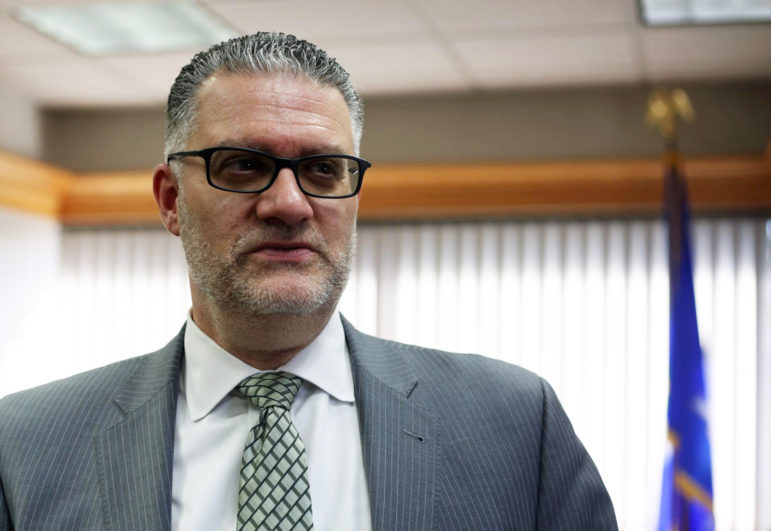 Sitting in his new office in Rocky Hill, Colangelo talked about some of his goals as chief, which include improving the public’s perception of the prosecutor’s job.

“I don’t think we’ve done a good job throughout the years of promoting what we do and how we do it,” Colangelo said. “People come to the system because they’re either victims of a crime or they committed a crime. So it’s a really bad time in their lives when they’re talking to a prosecutor. There should be a human side to what we do.”

Prosecutors are often called the gatekeepers of the criminal justice system. Colangelo hopes new transparency legislation that passed the General Assembly last year will provide data to show how they do their job. He also plans to look at staffing needs and workloads in the court system. And Colangelo acknowledges the challenges and changes in criminal justice against the backdrop of a modern world.

“Satisfying that need for people to understand and know what’s going on, balancing with our need to actually do a complete and independent and thorough investigation, sometimes we butt heads there,” Colangelo said. “And digital evidence, it didn’t exist 15 years ago, not the way that it does now. I mean, every case we have has a digital component to it.”

The future is also on Colangelo’s mind as Gov. Ned Lamont pushes for the legalization of marijuana. From the criminal justice standpoint, Colangelo sees several challenges, beginning with accurate and reliable sobriety testing. But Colangelo is also thinking about how to deal with past convictions for marijuana possession.

“In my career, I prosecuted people for possession of marijuana, gave them fines, nobody really went to jail for it,” he said. “But I’ll tell you that I never put on the record how much marijuana they were possessing when they pled guilty. So doing a blanket kind of erasure of this stuff is going to be difficult for us to figure out how to do.”

But so-called clean slate legislation, which would automatically erase certain criminal records if a person stays crime-free, would likely be the remedy. It’s a measure being considered this session that Colangelo said he supports. He just wants to make sure the erasures trickle down to all of the people who have those records.

Colangelo was sworn in as chief state’s attorney Jan. 31. He was one of four finalists for the job.

This story was first published Feb. 20, 2020, by Connecticut Public Radio.