Bill would provide attorneys to young adults in DCF care 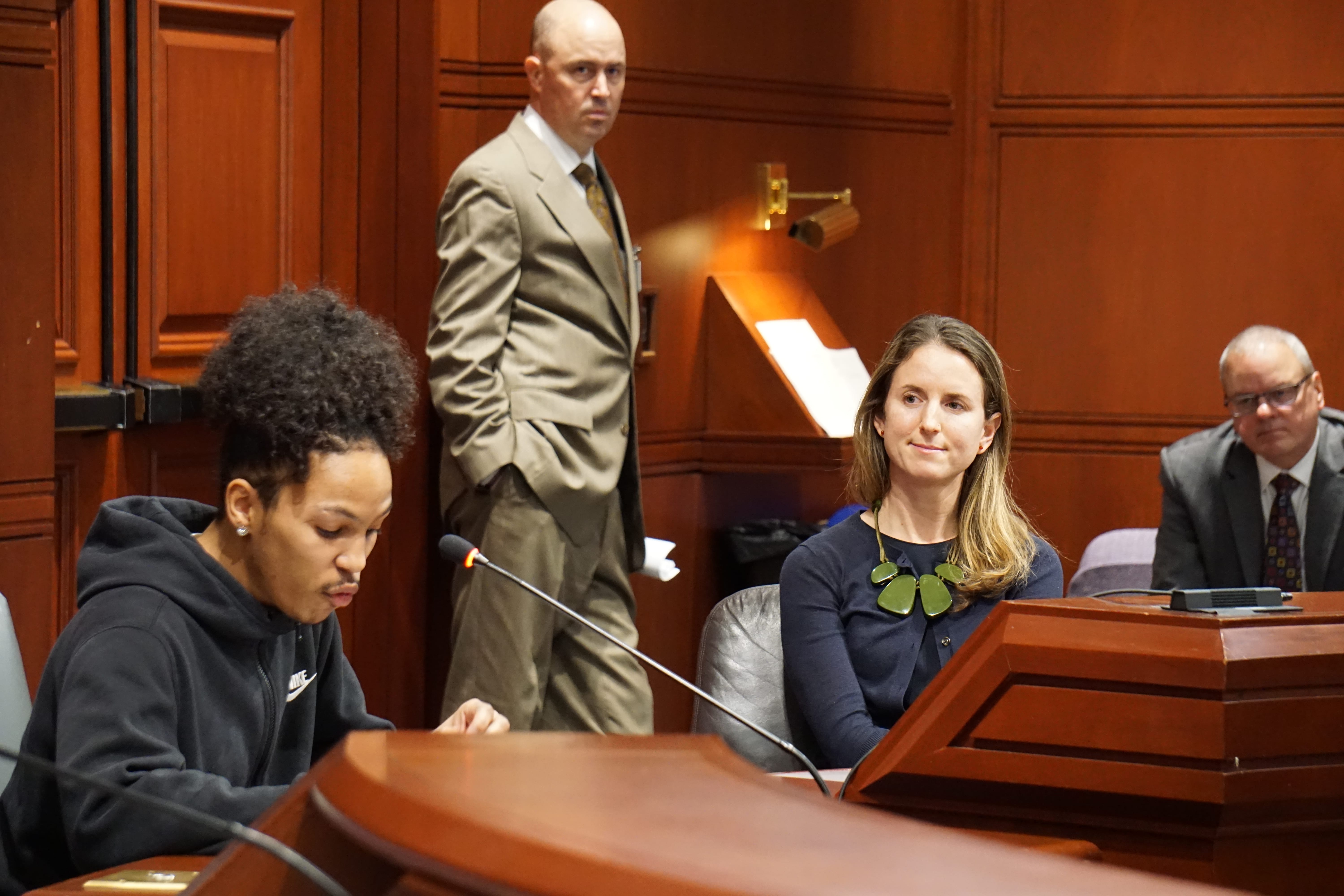 Kai Greene sits beside Stacy Schleif and testifies before the Committee on Children.

If it weren’t for the Center for Children’s Advocacy, Kai Greene figures he would be in jail. Late last year, his state social worker was supposed to drive him to a court hearing in Waterbury but failed to show up. So, in a panic, Greene texted his attorney, Stacy Schleif, who ordered him an Uber.

“What if I didn’t have somebody to advocate for me there?” Greene asked during a recent public hearing before the Committee on Children at the state Legislative Office Building. “I would have never showed up to court, and honestly I would have been doing time as we speak.”

Greene is one of approximately 450 youth over the age of 18 who are under the care of the Department of Children and Families. Minors who receive services from DCF are provided with attorneys who advocate for them in court on matters related to education, health and immigration status, but youth like Greene — legal adults just a few months or years past their 18th birthdays — are not automatically given counsel.

A new proposal being considered by lawmakers seeks to change that. Senate Bill 283 would extend legal representation to young adults up to age 23 who are under DCF supervision.

“What if I didn’t have somebody to advocate for me there? I would have never showed up to court, and honestly I would have been doing time as we speak.”

“Sometimes you do need adults to contact an adult to get things done,” said Greene, who entered foster care at age 13. “I’m 19. I should be taking initiative to do all this stuff myself. But it’s like, I’m only 19, I should be in school, worrying about school, living my best life or how everybody else says it, but I can’t do that because I have responsibilities.”

Studies show that young people aging out of foster care are among the most vulnerable in society. They are at risk of dropping out of school, being homeless, not having a job, spending time in prison and having long-term, untreated mental health issues.

“They are currently without any legal representation, facing adult-sized problems on their own,” Schleif said in her testimony before the Committee on Children.

Providing vulnerable youth with attorneys would help them navigate complicated state systems and give them an advocate with DCF or in court, said Schleif, a senior staff attorney at the Center for Children’s Advocacy.

“It’s about having an adult who knows the right questions to ask, and having the confidence to push back on the system when need be,” Schleif said.

Young adults under the agency’s care have a social worker, Schleif acknowledged, but “their ultimate loyalty” is to the department and its policies, not the young people entrusted to DCF’s care.

“A lawyer is somebody who has the ethical duty of loyalty to their client,” said Schleif.

The Office of the Chief Public Defender oversees assigned counsel to children in abuse and neglect and proceedings. DCF Commissioner Vanessa Dorantes said in her testimony on the bill that DCF is not opposed to the proposal and that the department does not have a policy regarding eligibility for legal representation. But, she said, “additional funding must be made available to the Public Defenders.”

SB 283 would have a “significant financial impact” on the Office of the Chief Public Defender, said Susan Hamilton, that agency’s director of delinquency defense and child protection. Currently, contracted attorneys receive $500 from her agency for each DCF client they are assigned, Hamilton said, even though the cases often last for years. Given that extending this legal representation would be treated essentially as a new case, Hamilton estimated it would cost approximately $255,000, assuming lawyers earn an additional flat rate of $500 for each of the roughly 450 young adults in DCF’s care, plus expenses related to expert witnesses and transcripts.

Hamilton would support the bill if funding were made available, but said she isn’t sure young adults in DCF care require representation in court besides an annual permanency hearing.

“The type of representation that these kids really need is, I think, on the administrative side of things,” she said.

Hamilton said it’s common for DCF-involved youth to need representation when the state wants to terminate or reduce one of the benefits it gives them, like housing assistance, health services or educational support.

“Right now they don’t have anybody to really advocate for them if they want to challenge it,” she said. “There’s way too many kids aging out without having that permanent connection.”

The Center for Children’s Advocacy currently has a pilot program designed to help young adults whom DCF has sought to discharge from their care and discontinue their benefits. But, Schleif said, the pilot does not have the resources to fill the immense need. It also requires young people to be proactive in reaching out to the center, a difficult thing for them to do when they are in crisis.

Greene said that’s why he reached out to Schleif’s office. By the time he found the Center for Children’s Advocacy, he had been discharged from DCF.

“I had to go through a whole summer by myself,” Greene said. Without support, he didn’t have a safe place to live. He spent much of his days making phone calls, trying to find a place to sleep.

After a few months, the Center for Children’s Advocacy helped him re-enter DCF care. He’s one of the lucky few young adults in DCF care who have a lawyer. It isn’t just him anymore. It’s him and Schleif, his attorney.