Connecticut hospitals are bracing for a surge of patients

Potential supply shortages and limited hospital beds are complicating that. 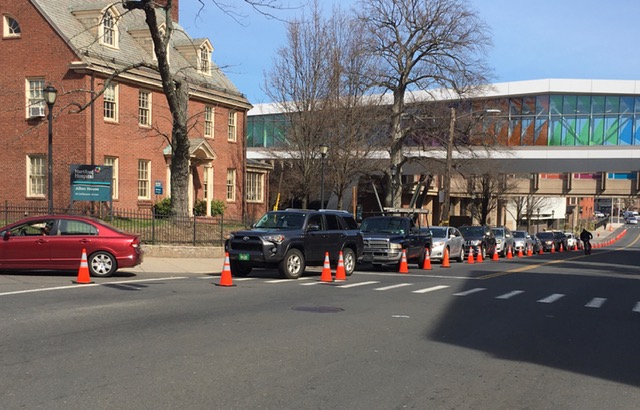 A line of drivers queue up to be tested for COVID-19 at Harford Hospital.

Hospitals across Connecticut are preparing for a surge in patients as coronavirus cases continue to rise, and state leaders have issued an urgent call for more equipment and staff.

After declaring on national television that 200 employees of a single health care system – the company overseeing Danbury, Norwalk, Sharon, and New Milford hospitals – are on furlough for possible exposure, Gov. Ned Lamont said the state was speeding up certifications for trainee nurses and reaching out to retired ones, a hurried effort to bolster staff as the system braces for a crush of patients.

He also has pressed for more ventilators and personal protection equipment, anticipating a shortage.

“Our hospital association and team are out there scouring the globe right now for ventilators,” Lamont told Wolf Blitzer on CNN. “Somebody from the White House did reach out to our staff, and I made a strong case that we needed not just testing, but PPE – the personal protective equipment.”

“This is what my people need, we don’t have enough of it,” he said. “The number of infections is escalating dramatically.”

Along with concerns about equipment and staff, hospitals face the prospect of a bed shortage.

“We are expecting a surge. It’s increasing by leaps and bounds.”

While 96 people have tested positive for COVID-19, the illness caused by the newest strain of coronavirus, Connecticut’s epidemiologist has warned there are likely as many as 9,600 cases here. And experts say the country hasn’t yet reached its peak for COVID-19 cases.

At least 24 people are hospitalized in Connecticut for coronavirus, and one person has died.

On Wednesday, state officials said they had about 1,200 available beds across the hospital system, though not all of them were set up for COVID-19 patients. Hospitals were working to reconfigure spaces to absorb a swell of cases.

“We are expecting a surge,” Renee Coleman-Mitchell, the state’s health commissioner, said. “It’s increasing by leaps and bounds. We don’t have the exact date or time when the surge will occur. But we are planning and preparing for it to happen.”

Telephone assessments are done by a physician or advanced practice registered nurse trained in managing respiratory diseases. The medical workers may refer a patient to the emergency room or direct them to stay home based on their symptoms.

On March 9, the first day of the call center’s operation, physicians there received 371 calls – well above what they had expected. By Monday, one week after opening, they had fielded more than 7,000 calls.

Along with the assessments, staff members give out information about coronavirus and discuss the importance of social distancing. When referring patients to a hospital, they are able to warn emergency departments in advance, so those workers can be ready with protective gear and keep the patients away from others.

“We’ve tried to control it in the community and slow the surge, rather than just wait for the surge to happen,” said Dr. Christian Pettker, associate chief quality officer for Yale New Haven Health. “We’re trying to prolong the time that we see patients rather than get a sudden burst all at once, and we think we have done a good job with that.” 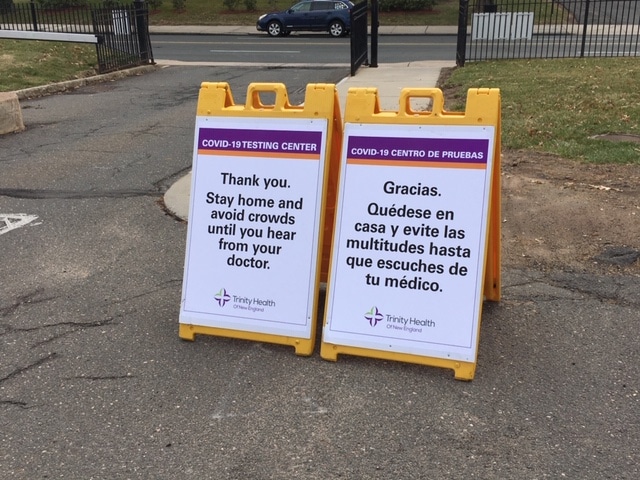 A COVID-19 testing station outside St. Francis Hospital and Medical Center in Hartford.

Still, Pettker said, “there will be a surge, and it will be a massive surge. So knowing that is actually helpful, because we can plan for all the cases we might expect.”

At least 10 hospitals in Connecticut have added drive-through or on-site testing, and more are working to get programs running. Public and private labs have processed more than 700 tests here since the beginning of the outbreak.

At St. Francis Hospital and Medical Center, which has 617 beds, officials said they had an “adequate” supply of personal protective equipment for now, though they are monitoring the levels closely.

“That is expected to afford us the time necessary to tap into the federal stock piles of such equipment if needed,” Dr. Philip Roland, St. Francis’ chief medical officer, said of the supply. “We house dozens of isolation rooms, with the ability to scale up as needed, in the event of a sizeable surge.”

Fiona Phelan, a spokeswoman for the Connecticut Hospital Association, said hospitals are working together on an ongoing basis to evaluate capacity.

“This includes understanding evolving federal guidance on patient care standards, assessing the range of potential clinical needs a patient may have and determining the ability to expand capacity based on equipment and space,” she said. “Hospitals are working directly with the state … and they have been good partners in responding to hospital need, such as additional masks, approval of alternate testing sites, and flexibility in existing telehealth requirements.”

Lamont has not said when a surge might happen in Connecticut. New York Gov. Andrew Cuomo estimated that the coronavirus outbreak would peak in his state in 45 days.

“Once received, these resources will be distributed on a priority basis to ensure medical providers, hospitals, emergency medical responders and other stakeholders can continue to provide essential services,” he said.

He did not say how many ventilators he had requested, or how many the state needs. Officials in New York – who have recorded 2,382 cases of COVID-19 and 21 deaths – said that in the worst-case scenario of a flu-like pandemic, the state could be short by as many as 15,783 ventilators a week at the height of the crisis.

“There will be a surge, and it will be a massive surge. Knowing that is actually helpful, because we can plan for all the cases we might expect.”

President Donald Trump, after first suggesting that states seek medical equipment themselves and not wait for the federal government, on Wednesday invoked the Defense Production Act to help make up for potential supply shortages. The law allows federal officials to order American manufacturers to make critically needed equipment, like ventilators, respirators and protective gear.

For Connecticut, the directive came just in time.

“I’ve been talking to urban health clinics, some of them say they’ve got just a few days more of swabs,” Lamont said Wednesday. Trump’s order will allow states to get the supplies they desperately need.

“There’s a sense that tomorrow is too late,” Lamont said.