Connecticut residents stuck abroad during coronavirus: ‘Come and get us’

Since last summer, school teacher Katie de Chabert and her family had been planning for what they call a once-in-a-lifetime trip to Peru and the ancient ruins of Machu Picchu.

They decided on the destination shortly after de Chabert lost her father in July. 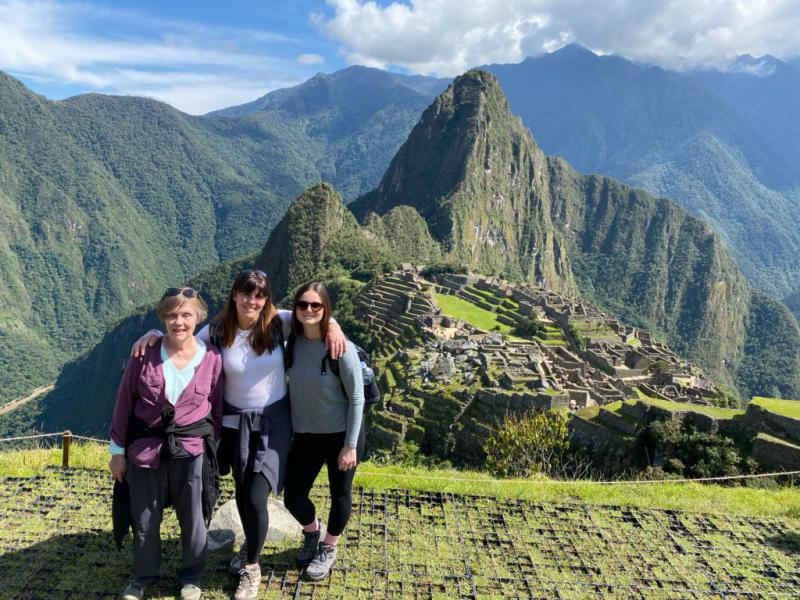 (Left to right) Lesley Bravi of Haddam; Katie de Chabert of Madison; and Abbi Bravi at the Inca ruins at Machu Picchu in Peru.

“Sort of to help my mother through her grieving process, and because it was always a bucket list trip for her, we decided as a group to go on this journey together,” she said.

But as their departure date of March 8 came closer, a new coronavirus that causes COVID-19 illness had extended beyond Asia, and into Australia, Europe and North America. De Chabert said they were aware of the spread, but South America had yet to report many cases at that point.

“We really monitored everything very closely, the situation,” de Chabert said. “It looked like South America was one of the safest places to be in the whole world at the time. So, we went ahead with the trip, and here we are, stuck.”

De Chabert, a resident of Madison, her 77-year-old mother Lesley Bravi, and her niece Abbi Bravi are among thousands of Americans seeking help in returning to the United States from overseas during the global disease outbreak.

Citizens have reported being stuck because of mandated quarantines, border closures and flight cancelations — all of which have occurred in Peru, as well as other countries trying to limit infection rates.

“Things have deteriorated so fast, especially since they left,” said Chris de Chabert of his wife and family members. He’s at home in Madison caring for the couple’s three children, spending a lot of time on the phone with commercial airlines trying to find them a way home.

A request by Connecticut Public Radio to the U.S. State Department for the exact number of citizens abroad was not returned. But government officials told the New York Times Monday that an estimated 13,500 Americans have requested help in returning to the United States during the pandemic.

About 5,700 citizens and legal residents have already been brought back on flights organized by the State Department, officials told the Times.

“There have been many Americans returned to this country, but there are many more still in need of assistance and we stand ready to help them in any way we can,” said U.S. Sen. Richard Blumenthal.

Blumenthal, with U.S. Sen. Chris Murphy, sent a letter to U.S. Secretary of State Mike Pompeo last week about their concerns for Connecticut residents stranded abroad due to the rapid progression of COVID-19 and related travel restrictions.

“Some families have reported that the embassies have told them there is ‘nothing they can do’ to assist – even though many other countries are evacuating citizens,” they wrote, “or were given inaccurate information about flight cancelations that caused them to miss an opportunity to get home.”

In the March 18 letter, the senators said the United States lagged behind allied nations in providing guidance and assistance to its citizens.

Blumenthal said there’s recently been some success in getting state residents and other Americans back home — some people stuck in Morocco are in the process of returning with help from the United Kingdom, he said.

But so far, de Chabert and her group are not among those who have returned. What was supposed to be a 10-day trip is now approaching a three-week stay in Peru.

“It’s one thing to be quarantined in your own country, but to have this feeling of uncertainty, not knowing when we’ll be getting home, is really hard,” she said.

The street outside of Katie de Chabert’s hotel in Cuzco, Peru, has limited foot traffic and barricades at each end after the country closed its borders and instituted a mandatory quarantine for COVID-19.

The U.S. Embassy in Lima started notifying Americans last week that the country would soon close its borders, cancel flights, and put in place a mandatory quarantine. The embassy advised people to board flights for the United States as quickly as possible.
But at the time of the advisories, de Chabert said her group was in a more remote part of the country and didn’t get those messages until they returned to the city of Cuzco. By then, she said it was too late to get to Lima, where the international flights were taking place.

It is also a 20-hour car ride away from where they are, since most local flights have been canceled.

De Chabert said there continues to be little communication and guidance from embassy officials on what will happen next.

“Just really feeling a sense of helplessness here, feeling stranded,” she said. “We just want our government to notice this situation and help.”

Bravi added, “I just want to get back into the country.”

A recent memo from the U.S. Embassy in Lima says about 600 Americans to date have left Peru on charter repatriation flights. Officials have told citizens to get in contact with the embassy as it looks to arrange flights to the United States with help from the Peruvian government.

For now, they feel relatively safe where they are in Cuzco, de Chabert said. Peru has maintained a level 1 travel advisory — the lowest level of concern — with the State Department.

But she said quarantine there involves little-to-no travel by car or bus, barricaded streets, a strict outdoor policy, and consistent police presence. On top of it all, de Chabert’s mother sustained an ankle injury, a rash and is experiencing other medical complications. De Chabert said she herself is coming close to running out of a daily medication.

Waiting on a way to get home has become the hardest part.

“We need to be brought from Cuzco, which is a 20 hour’s drive. There is an airport (here), but they just need to come and get us. Please,” de Chabert pleaded.