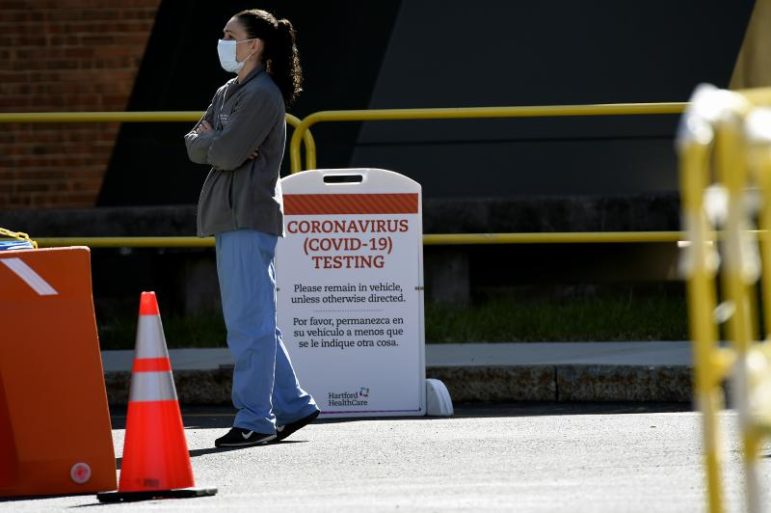 A nurse stands waiting during a mid-morning lull in drive through testing at Hartford Hospital Education and Resource Center on March 24, 2020 in Hartford.

As COVID-19 spreads further across the state, more people who suspect they might have the virus are seeking testing. Tests remain in high demand as the state struggles to get residents results in less than a week.

Marty Cossette, a New Haven CTtransit bus driver, was tested last Wednesday at MidState Medical Center in Meriden. Two days earlier, he stopped driving his bus through the streets of New Haven about halfway through an eight-hour shift, after his doctor told him over the phone not to come in for his annual physical.

But before Cossette was tested for COVID-19, he said he was sent to MidState’s emergency room for a series of blood tests and a chest x-ray that took hours. His doctor seemed to think he might be having a ‘cardiac event.’ Those tests came back negative, but Cossette’s symptoms persisted.

“I have a sore throat. I have a very dry cough at times. I’m very fatigued, even just walking from the bed to the kitchen and get a glass of water,” Cossette said. “I can, it just tires me out. I run hot, I run cold sometimes and I’m just completely worn down. I have a headache.”

Last Wednesday, he returned to MidState to get tested for COVID-19.

“I’m still waiting for the results. I called Thursday, I called Saturday,” Cossette said. “I called this morning and they keep saying that there’s a backlog for test results.”

A worker at Hartford HealthCare’s Clinical Command Center said on average it takes five days for test results to come back, but it could take up to a week.

Cossette and his wife Tiffany are both New Haven CTtransit bus drivers. He thinks he was exposed while on the job. “They’re letting these buses stay out,” Cossette said. “They’re flowing incubators for this stuff  to just continue spreading—and literally spreading through the state because all of the transportation systems in the state all connect with one another.”

The DOT has not provided additional paid leave for CTtransit employees. The couple is worried about running out of sick time. They’ve been self-quarantining since last week.

Marty says Tiffany’s symptoms are worse than his.

“She’s having constant trouble breathing. She can barely walk ten steps without being out of breath,” Cossette said. “She has the chills almost constantly, and we both barely move out of bed and she has a very nasty cough.”

Marty is 50. Tiffany is 35. When an ambulance took her to the ER last Thursday for breathing trouble, Marty couldn’t go with her. And just a few hours later, Tiffany was back at home. He said they told her there was nothing they could do for her but to keep self-quarantining.

“We’re still waiting for her to get tested,” he said, “and nobody’s willing to do a test on her because in their terms, she has normal health and not considered high risk, even though she’s exhibiting the symptoms.”

Cossette said his doctor considers him “high risk” because of his hypertension and diabetes. Marty and Tiffany have to remain at home with their two children, waiting. Usually, Marty drives day shifts and Tiffany works nights. But as bus drivers, each day at home is one less sick day and once they run out, those days become days they won’t get paid.

“I was told we could go on short term disability, but that’s not guaranteed right off the bat,” Cossette said. “There’ll be a delay in any income coming in. Obviously, health comes first, but we also have bills we have to pay too.”