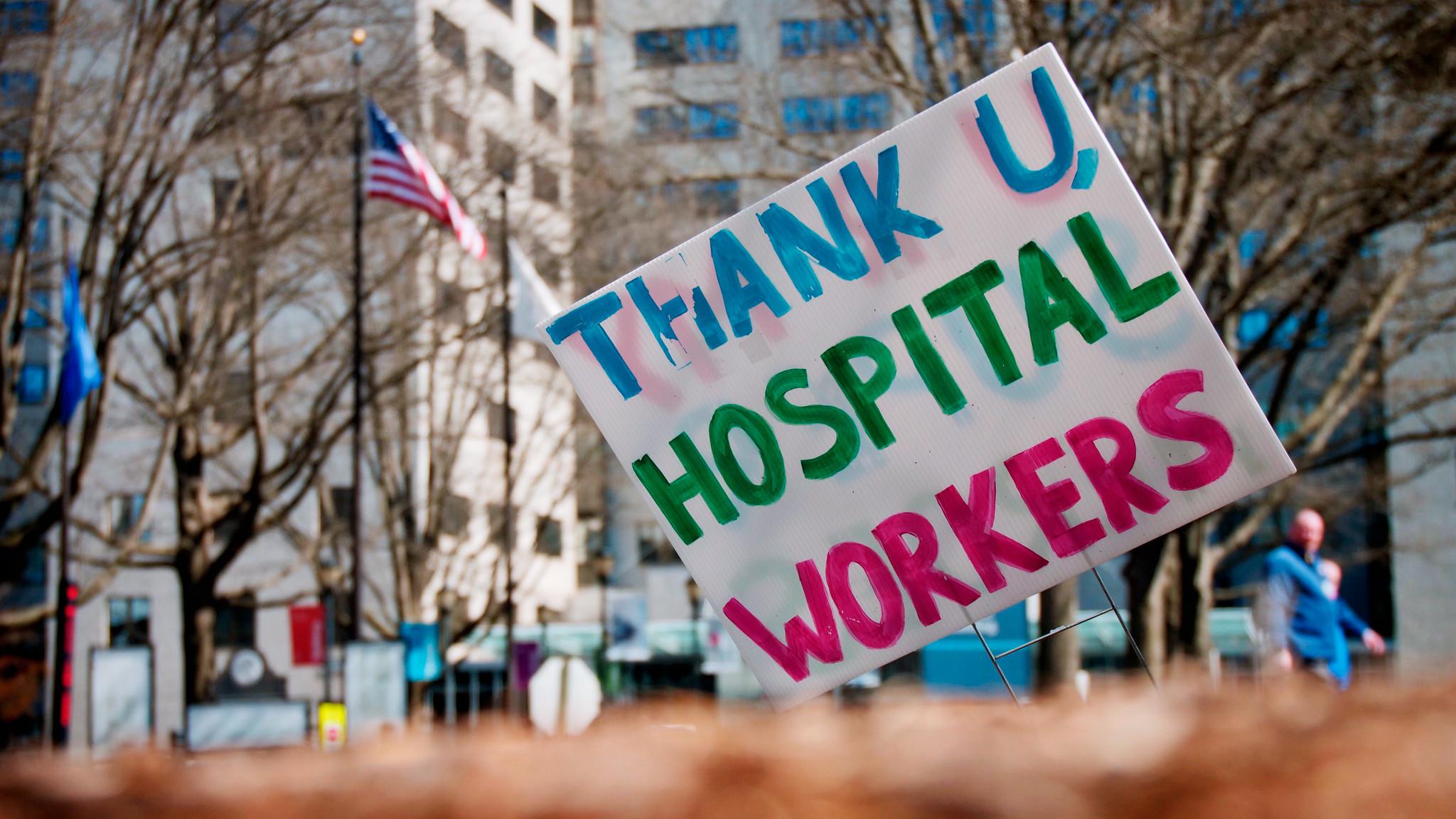 Coronavirus deaths and infections continued to rise in Connecticut Friday as officials reported that 39 percent of the state’s 6,800 hospital beds are currently available to treat people seriously ill from the disease.

Gov. Ned Lamont said 1,291 people have now tested positive for COVID-19 in the state, with 271 new infections, 27 deaths, and 173 hospitalizations.

Health officials predict the number of coronavirus infections in Connecticut will double every 3-5 days and that the peak of the pandemic is likely to occur around April 11-14.

Lamont said the shortage of hospital masks, gloves, and ventilators is “the biggest issue” now facing the state.

Shortages of personal protective equipment (PPE) and key materials needed for COVID-19 testing procedures and analysis continue to worry state and hospital officials. The shortages of materials also continue to limit how much testing for the potentially deadly virus is being done in Connecticut, officials said Friday.

Experts say that, without more extensive testing, it’s unclear exactly how rapidly the coronavirus is spreading and whether new hotspots for the disease are developing.

Josh Geballe, Lamont’s chief operating officer and the person in charge of getting more of the urgently needed medical supplies, said there are now 932 ventilators across the state’s hospital system. Ventilators are considered a critical piece of equipment to keep severely infected patients alive and there is a nationwide shortage of those complicated medical machines.

Connecticut has requested 1,500 ventilators from the federal stockpile, he said, and “hasn’t heard anything back.”

“Ventilators are one of the most critical elements of the health care system,” Geballe said.

Jeffrey Flaks, CEO of Hartford Health Care, said hospitals across the state are now looking to possibly alter a single ventilator to enable it to serve two patients – something not normally done.

Lamont said he plans to issue additional executive orders further restricting activities and businesses in an effort to slow the spread of the virus. He also said he is “running out of patience” with health insurance companies that are failing to extend benefits to people in this crisis.

The governor also urged Foxwoods officials not to go through with their announced plan to reopen their casino on April 1. “They should stay closed at least for the near term,” Lamont said.

Older people most at risk, another nursing home death

The latest statistics show that those in the 50-59 age group account for the largest number of positive COVID-19 tests, but the people most likely to be hospitalized are those age 70 and older. The statistics released Friday demonstrate that the overwhelming majority of deaths from the virus involve people over age 80.

“You are ten times more likely to be hospitalized if you are over 80 than if you are under 50,” Lamont said. 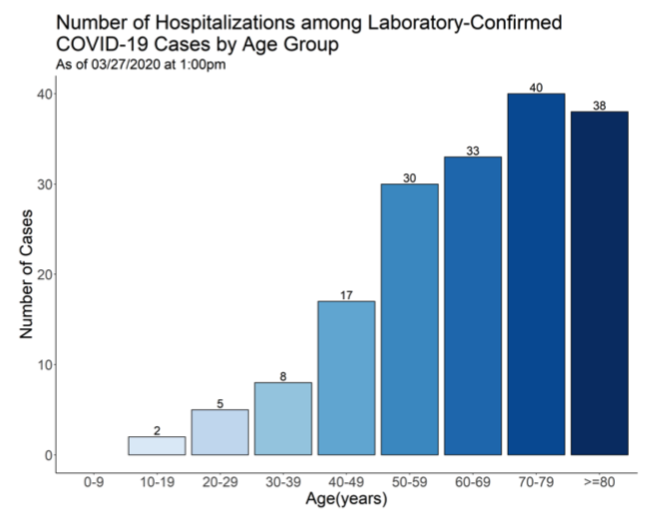 The new coronavirus deaths include a third resident of the Evergreen Health Care Center in Stafford Springs, a source with knowledge of the situation said Friday.

No information about the resident was released. A spokesman for Athena Health Care Systems, the parent company of Evergreen, said the company will no longer provide updates on the number of cases and deaths across its nursing homes. Athena has 54 nursing homes, assisted living centers and home health care agencies across Connecticut, Rhode Island and Massachusetts.

One person has tested positive for the disease at Sharon Health Care Center in Sharon, another Athena facility. The woman, a long-term resident of that nursing home, was isolated. Her roommate was also moved to a private room.

“We are doing everything in our control to provide our residents a safe and comfortable environment,” Athena officials wrote in a statement on the Evergreen Health Care Center website. “We have implemented daily cleanings, restricted visitors to our facilities, are monitoring residents at every shift, and our staff is engaged in aggressive infection prevention strategies.

At Benchmark Senior Living at Ridgefield Crossing, in hard-hit Fairfield County, two residents recently died after testing positive for the coronavirus. In a statement Friday, the nursing home said 16 residents and six staff members have tested positive. The assisted living facility said affected residents have been isolated, while infected staff members were on leave.

Lamont said the state is carefully tracking what is happening in the nursing homes.

“They know it’s a petri dish for spreading that virus around. They’re being incredibly careful. That said, yeah, there are some risks of contagion there,” Lamont said during an interview with WNPR. “And we’re following that very carefully.”

But on Friday, a state Department of Public Health spokesperson said the agency doesn’t keep a running tally of nursing home residents in Connecticut who have tested positive for COVID-19.

Lamont has requested that the Trump Administration issue a disaster declaration for Connecticut because of its close proximity to New York, which has become the epicenter of the COVID-19 pandemic in the U.S. More than 500 people have died in New York and more than 44,600 people have tested positive for the disease.

Connecticut officials say they have so far received only a very limited response to their requests for more personal protective equipment (PPE) from the national strategic reserve.

For example, only about 43% of the 250,000 N95 respirator masks Connecticut has requested were delivered in the past two weeks. Less than 32% of the gloves the state has asked for have arrived, and only about 10% of the hospital gowns Connecticut sought have been delivered.

Hartford HealthCare officials estimate they need between 12,000 and 15,000 masks a day to safely equip medical staff at their facilities. Hospital officials around the state say nurses and doctors will be using up PPE at a higher rate as the pandemic gets worse in this state.

This chart shows what the state has requested from the federal government — and what it has received so far.

Geballe said state officials are being extremely careful about which hospitals are getting the equipment coming in from the federal government.

The state has distributed about 90% of what it has received from the federal government, he said, and is currently holding back the remaining 10% to create its own contingency reserve for emergencies.

“It’s tough, because there is such a shortage,” Geballe said. “There are so many people who want and deserve more equipment. For now, we have to be very thoughtful about where everything goes.”

The governor said this week that the state is now doing less coronavirus testing outside hospital settings in order to conserve vital protective gear like gloves and surgical masks needed by nurses and doctors treating seriously ill virus patients.

Dr. Ajay Kumar, Hartford HealthCare’s vice president for medical affairs, said Friday that “one big bottleneck” in his system’s COVID-19 testing program is a shortage of the substance used to transport test swabs from the patient to the laboratory for analysis.

Kumar said Hartford Health Care is now conducting “several hundred tests every day” but that the lack of that “transport media” means far less testing can be done outside the system’s hospital facilities.

Another testing bottleneck is a lack of the reagents used in the analysis of possible virus samples from people, according to Kumar.

“We need a lot more testing in the community,” Kumar said. He said that more widespread testing in Connecticut would enable experts to better predict how fast the disease will spread and when the peak might be reached.