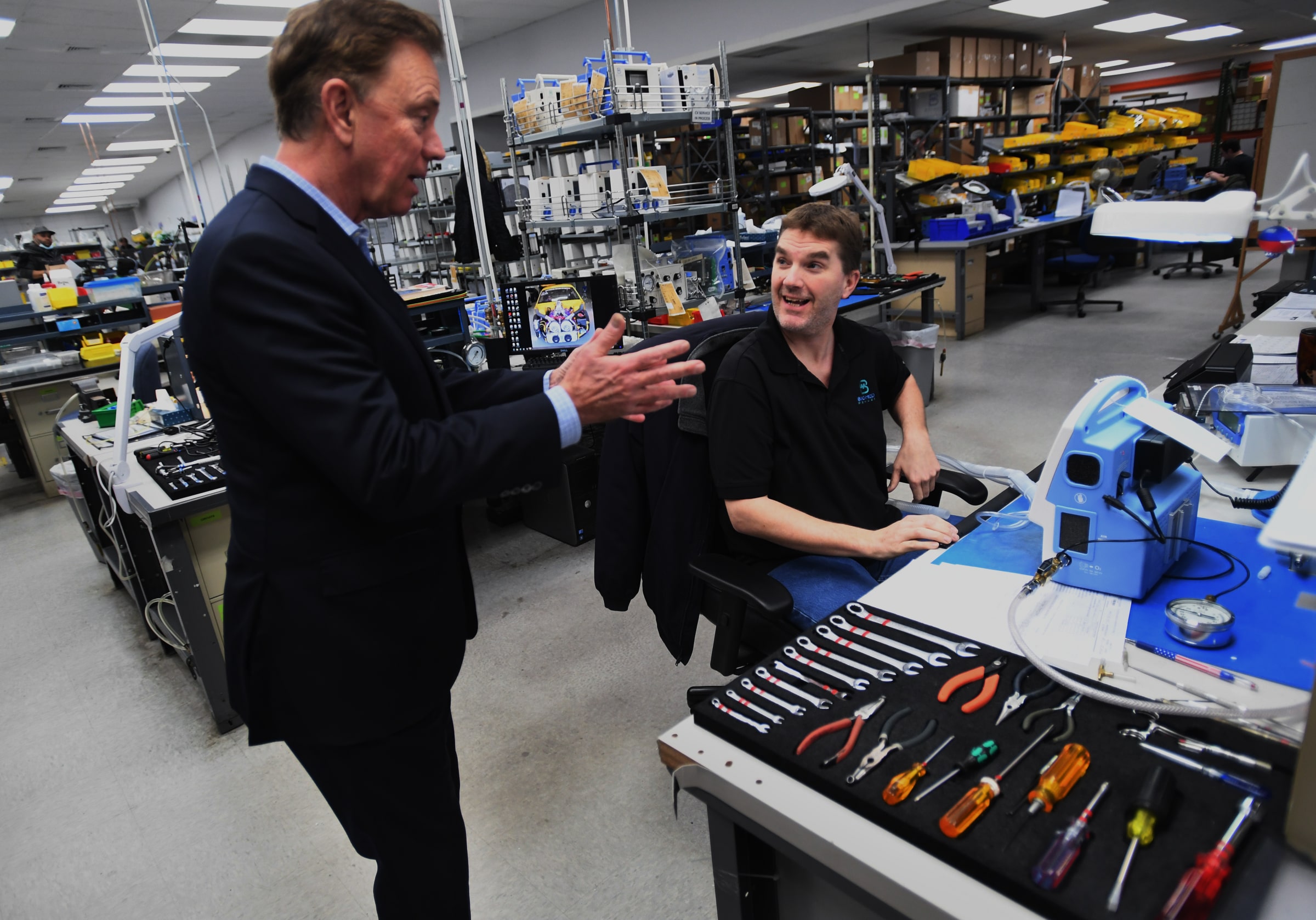 Governor Ned Lamont, left, talks with Service Manager Keith Wilson during a tour of ventilator manufacturer Bio-Med Devices in Guilford on Sunday. The company has signed a contract to produce ventilators for the state at an initial quantity of ten per week for ten weeks.

The Federal Emergency Management Agency (FEMA) has approved Connecticut’s request for a major disaster declaration, unlocking crucial federal funding needed to fight the COVID-19 pandemic as it continues its spread across the state.

An additional 469 Connecticut residents tested positive for COVID-19, state officials said Sunday night, bringing the state’s total number of cases to 1,993. More than 11,900 tests had been conducted in both state and private labs, and one person died from the virus since yesterday’s update, bringing the total number of fatalities to 34. The majority of the deaths continue to be in Fairfield County.

The number of hospitalizations jumped from 205 to 404, a seemingly stark one-day increase. The governor’s office said the increase is not actually that dramatic, however, because the state switched today to using more up-to-date information from the Connecticut Hospital Association. It had been solely relying on the Department of Public Health.

The hospital association reported 308 COVID-19 hospitalizations yesterday. So while the number of hospitalized patients in Connecticut increased by nearly 100, it did not double in one day.

Earlier in the day, Lamont’s office announced that state agencies and municipalities in Connecticut’s eight counties will be reimbursed for 75% of the costs associated with their pandemic response and emergency protective measures, thanks to the approval for public assistance.

The White House is still reviewing Lamont’s request for additional disaster assistance, which could include expanded unemployment and food benefits, and child care aid.

“I remain hopeful that our request for assistance for individuals will also be approved because this pandemic has had a significant impact on the livelihoods of so many people in Connecticut,” Lamont said. “Thousands of workers and families are badly hurting.” 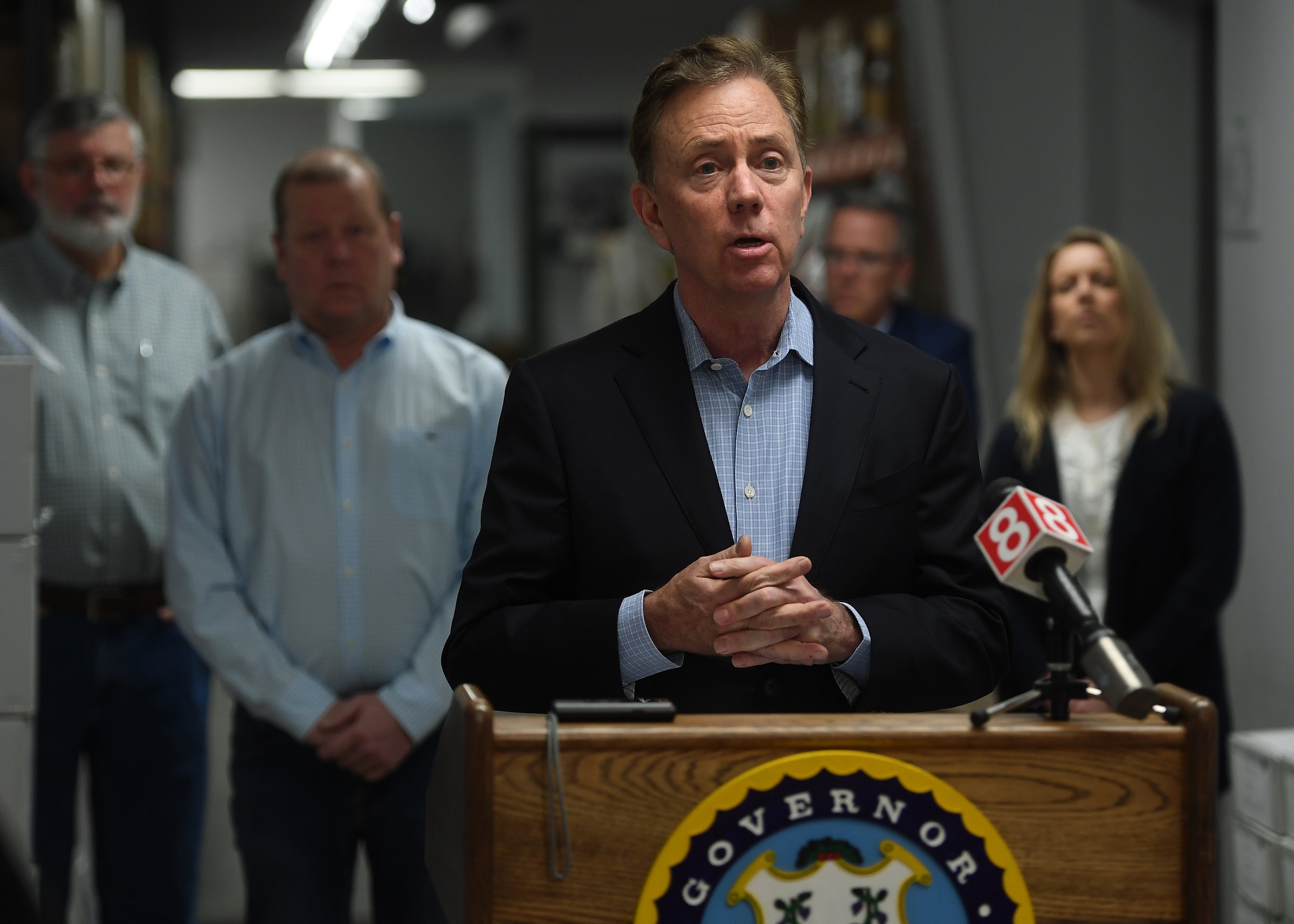 Health officials predict the number of coronavirus infections in Connecticut will double every 3-5 days and that the peak of the pandemic is likely to occur April 11-14.

Lamont and other state officials are increasingly frustrated by the slow rate at which they are receiving critical medical supplies from the federal government, including masks, gowns, and gloves for front-line health care workers. The state is still waiting for the 1,500 ventilators it has requested from the federal stockpile to augment the 932 ventilators currently available across the state’s hospital system. Ventilators are a critical piece of equipment needed to keep severely infected patients alive, but there is a national shortage of these machines.

The New York Times reported Sunday that 130,000 N-95 masks, about 1.8 million surgical masks and gowns, tens of thousand of gloves and more than 70,000 thermometers arrived in New York on a plane from China Sunday that will be distributed by FEMA to New York, New Jersey and Connecticut.

The New York region has been especially hard hit by the virus, prompting governors in some states, such as  Florida and Maryland, to order visitors from the region to self-quarantine for 14 days and the C.D.C. to issue a formal advisory late Saturday night urging the residents of Connecticut, New York and New Jersey to “refrain from nonessential domestic travel for 14 days effective immediately.”

On Sunday morning, Lamont visited Bi0-Med Devices Inc., a manufacturing company in Guilford that is producing ventilators for hospitals. The company has committed to supplying 100 ventilators to Connecticut, Lamont said, with the possibility of providing more if supplies can be found.

Lamont said officials are scouring the globe for ventilators. Ordering equipment from outside the state or country can lead to shipments re-routed at the last minute.

“You have supply chains that go all the way back to China,” Lamont said. ‘The degree to which we can have a home-grown supply chain makes a world of difference, and Bio-Med is part of that, ventilators in particular, they’re going seven days a week.”

Lamont said officials were trying to track down parts needed to manufacture ventilators so Bio-Med, Inc. can make more, perhaps up to 1,000.

“We’re trying to figure out how we can locally source the parts, as well, to help them ramp up, given the need we have,” Lamont said. “The more that we can do as a state ourselves, the better I feel. Something that we can control.”

As the state braces for the April surge, the disease continues to spread in nursing homes, where both staff and residents are falling sick, and among prison employees.

The town of Suffield announced Saturday that “a number of staff and residents” at Suffield House, the town’s sole nursing home, have tested positive for COVID-19. There are also confirmed cases of at the assisted living facility, Suffield by the River, town officials said.

The Suffield cases come on top of outbreaks at at least three other facilities in Connecticut, including three deaths and at least eight other confirmed cases at Evergreen Health Center, a nursing home in Stafford Springs.

As of Sunday a dozen inmates have been tested for COVID-19, none of whom were found to have the virus. Three DOC employees have tested positive, however, as has a staff member assigned to the New Haven Correctional Center.

In a memo sent Thursday to all Department of Correction staff, Commissioner Rollin Cook said “isolation units” had been set up at seven correctional facilities across the state. Newly admitted inmates will spend 14 days in the separate housing units before they join their peers in the general population. The spaces are located at the Bridgeport, Corrigan-Radgowski, Hartford, and New Haven correctional centers, and Garner, Manson and York prisons.

“These isolation units should prove to be an extremely effective defense against newly admitted offenders introducing the virus into the facilities,” Cook wrote.

The department’s Correctional Enterprise of Connecticut unit has begun making personal protective equipment, to respond to the national shortage of face masks. Around 230 inmates at four correctional facilities have produced more than 4,100 face masks. In an email, DOC spokeswoman Karen Martucci said inmates earn up to $1.50 per hour for their efforts, the top of the department’s pay scale.

Martucci said those masks will first go to the correctional facilities. “Once adequately supplied, we are more than ready to help our communities,” Martucci wrote in an email. “We are all in this together and want to collaborate to the best of our abilities.”

In other news, Department of Public Health Commissioner Renee D. Coleman-Mitchell issued an executive order late Saturday night directing local, state and private sector partners to move homeless people out of shelters into alternative, less congested housing. The directive also calls for temporary housing for first responders and health care workers, who are at risk of having been exposed to COVID-19 and cannot return to their homes because they could infect their families.