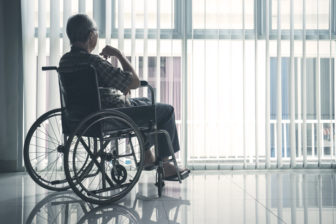 Gov. Ned Lamont’s administration unveiled a plan late Wednesday for separating nursing home residents who have tested positive for COVID-19 from those who are negative. The proposal involves moving sick residents to specially designated facilities or to different units than the healthy ones.

State officials shared 10 locations that could potentially house the COVID-19-positive residents. But within hours of the announcement, nursing home leaders argued some of them were no longer being considered.

Tim Brown, a spokesman for Athena Health Care Systems, the parent company of Evergreen and Sharon, said Wednesday that Evergreen has been pulled from consideration. He did not give a reason for the withdrawal.

Several residents at Evergreen and at least one at Sharon have tested positive for the disease, and three from Evergreen have died.

Matthew Barrett, head of the Connecticut Association of Health Care Facilities, said the two Touchpoints facilities also should not have been included.

“Regrettably … the nursing home sites appear to have been prematurely announced in error,” he said. “Evergreen Health Care Center is not a designated center. The Touchpoints facilities are not designated centers, noting concerns expressed by the operators.”

Collectively, the 10 facilities would have provided 1,175 beds for sick residents.

Operators of the designated nursing homes must submit written proposals to address staffing issues, equipment needs and systemic support before they can begin receiving COVID-19-positive residents.

“As the number of individuals who are diagnosed with COVID-19 rises, the health care system will be stretched to extremes,” Lamont said in a statement. “Compounding this challenge is the fact that the elderly population will be at greater risk when diagnosed.”

“Anyone diagnosed as COVID-19 positive in a hospital and later admitted to a nursing home will be monitored and assessed for 14 days in an area that only has other COVID-19 positive residents,” the plan says. “Anyone admitted who is negative for COVID-19 will be housed with other residents who are negative, as a mitigation measure.”

“The fear factor is, now we’re going to become a hub for positive patients. What does that mean for the community? Because obviously, people we know and love work there.”

Nursing homes will dedicate specific units for the purpose of grouping together residents who have been diagnosed with coronavirus.

Residents who test negative or display no symptoms can voluntarily transfer to facilities where there are no confirmed cases of the disease.

Nursing home leaders are still trying to figure out how staff would be divided among the facilities. For workers assigned to the  COVID-19-positive buildings, ample protective gear must be supplied, they said, and pay must be adequate.

Sen. Cathy Osten, a Democrat from Sprague who co-chairs the legislature’s Appropriations Committee, said leaders of several legislative panels want to review the procedures that will regulate how nursing home staff manage infected and uninfected populations.

One issue they want to address is whether employees treating COVID-19-positive patients would also work in buildings with uninfected residents.

Brent Colley, the first selectman of Sharon, said he was not informed that the Sharon Health Care Center was being considered as a site for COVID-19-positive residents.

People in town have been contacting him seeking clarity since the facility was mentioned in a news article this week as a possible location.

“The fear factor is, now we’re going to become a hub for positive patients,” he said. “What does that mean for the community? Because obviously, people we know and love work there.”

“It’s been stressful enough with people from New York coming here,” Colley said. “Now, the potential to have people coming here that are positive and what that means is, I imagine, stressing a lot of people out.”

Lamont on Wednesday also released a list of 36 nursing homes where at least one patient has tested positive for COVID-19. The data does not show how many cases or deaths each facility has, and does not include the number of nursing home workers who have tested positive.

A total of 124 nursing home residents have contracted the disease. Of those, 52 have been hospitalized, and 13 have died.