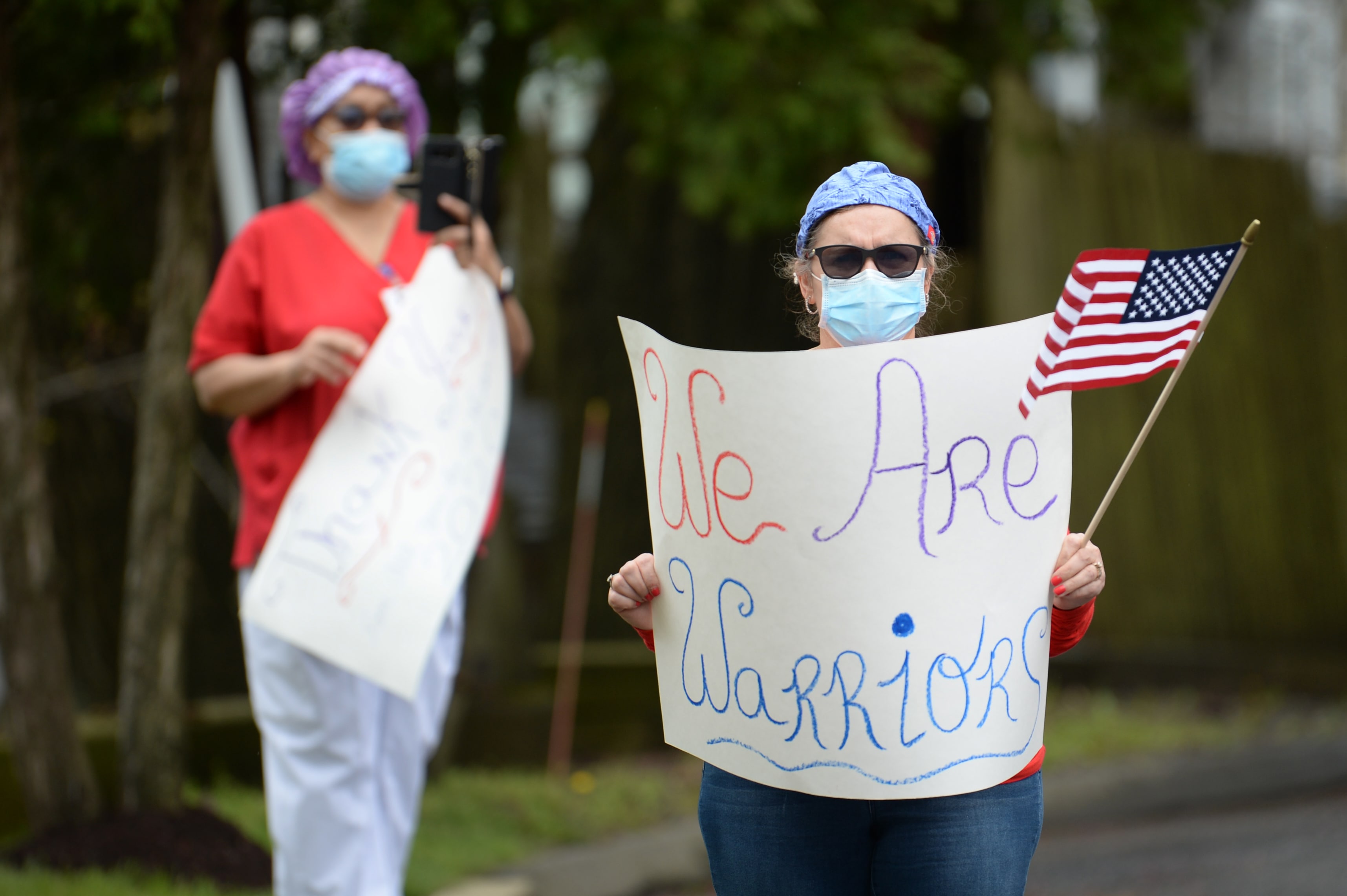 Health care workers at Northbridge Health Care Center in Bridgeport hold signs during a visit last week by Gov. Ned Lamont and other dignitaries to recognize frontline health care workers, residents and patients in recovery from COVID-19. Northbridge is one of four COVID recovery centers in the state.

The state said the number of patients hospitalized with coronavirus jumped by three dozen people to a total of 1,500 on Tuesday.

Connecticut reported 648 more positive COVID-19 cases and 77 additional deaths, bringing the total number of people reported dead from coronavirus in the state to 2,633.

“This is by no means behind us,” said Gov. Ned Lamont. “We better be very cautious as we plan going forward.”

Lamont has said a continuous 14-day decline in hospitalizations is key to the state’s goal of gradually reopening Connecticut’s economy beginning on May 20.

On Tuesday, Josh Geballe, the governor’s chief operating officer, said the hospitalization metric will be a “rolling average,” and that a one-day jump wouldn’t reset the clock on plans to reopen.

“Today’s just one data point, but we’re obviously going to be watching it very carefully in the coming days,” Geballe said.

Another thing the administration appeared to be watching were car protestors outside the governor’s residence on Monday, advocating for a more rapid reopening of the state’s economy.

“When you wear a mask it’s not necessarily to protect yourself, it’s to protect everybody,” Lamont said. “It’s a different way of thinking what your obligations are. And that’s why I continue to be strict about this and urge you to maintain the social distancing because that’s how we get this state going again.”

Connecticut’s schools will remain closed for the remainder of the academic year because of concerns over the novel coronavirus.

The governor’s office said distance learning will continue and schools will still be required to provide meals under the school lunch and breakfast programs.

The state said no decision has been made on summer school, but camps will be able to open this summer beginning on June 29.

That order was set to expire on March 31, but was extended twice, most recently to May 20.

The Connecticut Education Association, which is the state’s largest teachers’ union, praised the decision.

In a statement, it said the state needs to implement more COVID-19 testing before students should be allowed to return to the classroom. It also said teachers will need more personal protective equipment and more time to develop plans for staggered start times and other social distancing measures. 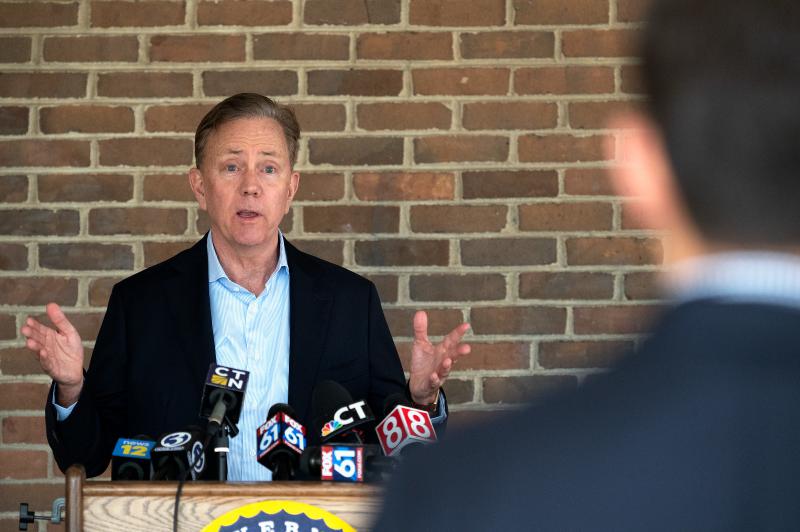 Gov. Ned Lamont speaks at a press conference in April.

“At this time, everyone’s top priority must be to protect the health of students and staff, and to prevent the spread of the coronavirus,” said CEA President Jeff Leake in a statement. “Experts say a resurgence of the virus could occur this fall. We must use the next few months to ensure that safety procedures and protocols are in place before students, teachers, and staff re-enter the classrooms.”

Hartford Mayor Luke Bronin also came out in support of Lamont’s decision to continue remote learning through the rest of the school year and said it’s crucial for students to stay engaged.

“We need to make sure they are learning as much as possible at this time,” Bronin said.  “It’s already going to be hard enough to come back from this period. We can’t afford for our kids to lose weeks, months of their education.”

Spring athletics will also be canceled as a result of the governor’s announcement.

The Connecticut Interscholastic Athletic Conference said in a statement Tuesday there will not be a 2020 CIAC spring sports season.

It said the agency is focusing on guidelines for “resocialization of CIAC sports in the fall.”

Another inmate dies from COVID-19, bringing total deaths to six

The Connecticut Department of Correction reported that a 74-year-old male from the Osborn Correctional Institution in Somers died Tuesday from complications related to COVID-19.

It’s the sixth offender under state DOC supervision who has died because of the virus. Two of those individuals died Monday.

Due to medical privacy laws, the state said the names of the deceased are not being released.

The DOC said the man who died Tuesday last entered the state prison system in May of 2013 and was serving a 13-year sentence for Sexual Assault in the First Degree – with a victim under the age of 13.

So far, 450 offenders have tested positive for the novel coronavirus. There have been 327 recoveries, according to state statistics.

Hartford HealthCare said Tuesday it plans to expand its use of an experimental drug called remdesivir.

“What they found is that patients who received remdesivir had about a 31 percent faster time to clinical recovery compared to those who did not receive remdesivir,” Dempsey said.

Physicians in Connecticut had been giving remdesivir to patients under a federal program called compassionate use. But now the drug is accessible via emergency use authorization, which hospital officials said expands the parameters governing how the drug can be used.

Eric Arlia, Hartford HealthCare’s senior director of pharmacy, said the federal government will distribute a supply of the medication to health systems including Hartford HealthCare within the next week, but health officials don’t yet know exactly how many doses they will receive.

“They’re going to do this based on current conditions — how many ICU beds you have, how much COVID activity is in your region,” he said.

Priority will be given to patients who are severely ill. But Dempsey cautioned more clinical trials are needed to determine just how effective this drug will be.

Local businesses looking to stock up on necessary personal protective equipment in New Haven got some help today, through a free mask distribution set up by the city.

The distribution happened at the New Haven Regional Fire Academy this morning.

Additionally, the city said it was making up to 50,000 masks available for free to city residents.

Bridgeport Mayor Joe Ganim also said Tuesday his city will distribute 100,000 masks to Bridgeport residents to protect against the spread of coronavirus in the community. And, in Hartford, the city’s fire department planned to deliver over 3000 surgical masks and shields to essential businesses Tuesday. Bronin said the gear matters now more than ever as the state begins to reopen.