In hospitalizations and jobs, Lamont sees good numbers and bad 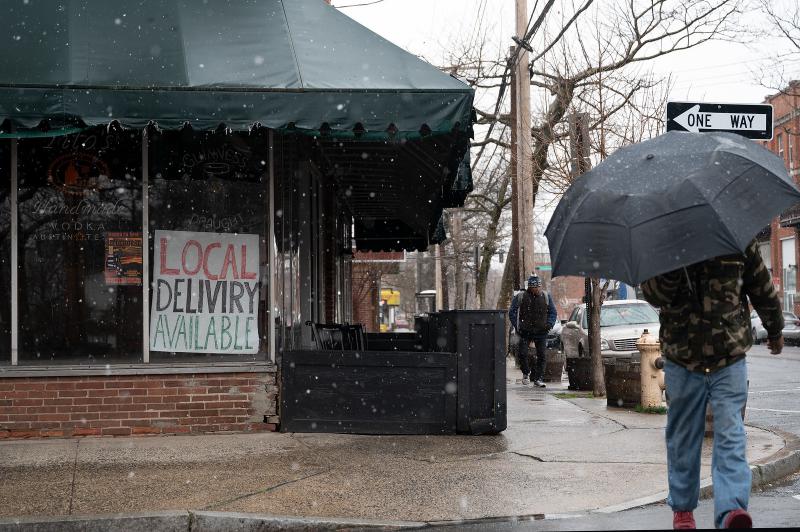 A man walks by Christopher Martins Restaurant & Pub in New Haven about one week after Connecticut Governor Ned Lamont ordered that all restaurants close to limit the spread of COVID-19.

Coronavirus-related hospitalizations continue to drop, Gov. Ned Lamont said Friday morning, but the economic fallout of a surge in unemployment claims continues to tear through the workforce as Connecticut is poised to reopen some parts of its dormant economy next week.

Lamont has emphasized for weeks that the number of people hospitalized with coronavirus will be a key metric as the state plans start reopening next Wednesday.

On Friday, the governor delivered some more good news on that front: hospitalizations dropped by about 70 people since the day before.

“That’s the biggest one-day drop we’ve had in some time,” Lamont said. “That’s about 40% less than our peak a few weeks ago, and that’s a key trend that continues in the right direction.”

“What does not continue in the right direction,” Lamont said, “are job numbers.”

State officials said Thursday that Connecticut received more than half a million claims for unemployment compensation since the start of the pandemic. The claims have disproportionately impacted women and people of color, Lamont said, including many in the service sector.

So far, Connecticut has deposited more than $1.3 billion in unemployment claim benefits.

“It’s the stuff we haven’t seen since the great depression,” Lamont said. “Much worse than what we saw just in ‘08/’09.”

One of those supports, the Paycheck Protection Program, has benefitted over 60,000 small businesses, Lamont said, or more than 60% of all businesses in the state.

PPP loans last for two months and are fully forgiven if employers forgo layoffs and funnel most of the money toward payroll costs. But the clock is ticking on those benefits, the governor said.

“There’s about another month to go on those PPP loans,” Lamont said. “Which is why I still want to thoughtfully try and get people back to work looking at that window as it comes up in June and July.”

Connecticut reported 94 deaths linked to COVID-19 on Thursday. That’s the highest number in a single day since May 2. Confirmed cases surpassed 35,000.

A total of 3,285 people are reported dead from coronavirus-related complications in Connecticut.

New Haven Mayor Justin Elicker said Friday the city will work to grow its COVID-19 testing for small businesses while the state moves to begin reopening its economy on May 20.

Points of focus for that reopening next week include outdoor dining at restaurants, hair salons and barbershops, and museums, city officials said.

“We are encouraging people that are running businesses that provide close contact with customers to have employees tested,” Elicker said.

Elicker’s message came shortly before state officials said asymptomatic people who are in the “worried well” should not go out right now to get a coronavirus test.

Small business owners and workers were not mentioned.

“We want to prioritize that asymptomatic testing for the people who are most likely to be at risk,” Geballe said. “So it’s really just a question of prioritization. But if you think you are in a position where you have been put at risk due to COVID, even if you don’t have symptoms, then we would encourage you to go get tested.”

The mayor said New Haven’s test site at the corner of Chapel and Day Street could accommodate those looking to get a test if they schedule an appointment.

As of Thursday, Elicker said there have been 2,146 positive cases of COVID-19 in New Haven and 83 city residents have died due to complications from the virus.

The Connecticut Department of Mental Health and Addiction Services reported Friday that a second person who was in one of DMHAS’ inpatient psychiatric facilities died due to complications related to the novel coronavirus.

State officials said the individual was a patient at Connecticut Valley Hospital but had been transferred to an acute care hospital where they later died after a brief hospitalization.

To date, laboratory data indicate 71 confirmed cases of coronavirus among patients at the agency’s eight public health facilities. An additional 82 staff members have tested positive for the virus.

Department officials said 36 patients and 50 staff members have recovered from the illness.

Laptops scheduled to make their way to Connecticut students next week

State officials said Friday that the first wave of nearly 17,000 laptops will begin to reach students next week. The shipment of computers aims to help students who are learning from home during the pandemic, but who may lack resources necessary to access proper online learning materials.

In April, the state moved forward with purchasing laptops for a total of 60,000 high school students in Connecticut’s under-resourced communities. The $23.7 million expense is the first major purchase for The Partnership for Connecticut, the collaboration between state leaders and billionaire philanthropist Barbara Dalio.

On Monday, the first batch of laptops is expected to arrive in New Britain followed by six additional districts throughout the week, including Bloomfield, Bridgeport, Danbury, East Hartford, Hamden and Hartford.

State officials said the first round of shipments will prioritize “sites where fewer than 60% of students have 1:1 device access at the school level.”

Connecticut never closed its state parks and beaches in response to coronavirus. But state officials have limited parking capacity at some parks and temporarily closed others to new visitors when the one-day visitor count gets too high.

Regardless, on Friday, Lamont signed onto a multi-state agreement with the governors of New York, New Jersey, and Delaware that says each state will open beaches in its respective state on Friday, May 22, in advance of the Memorial Day weekend.

The governor’s office said people looking to visit a state beach should pick locations closest to their home, consider visiting early in the morning to avoid crowds, and only go with members of their immediate household.

Thermometers to be distributed as Connecticut moves toward reopening

The state announced Friday that 50,000 infrared thermometers will be set aside for distribution to small businesses, nonprofits, and places of worship as the state begins to reopen on May 20.

The thermometers will be ”delivered to the municipalities in which the organizations are located,” state officials said in a release, “and then the municipalities will contact the recipient entities to inform them of a time and location they can pick up their requested equipment.”

Entities that would like to request a thermometer can fill out the forms located at ct.gov/coronavirus in the “Access to Personal Protective Equipment” section.