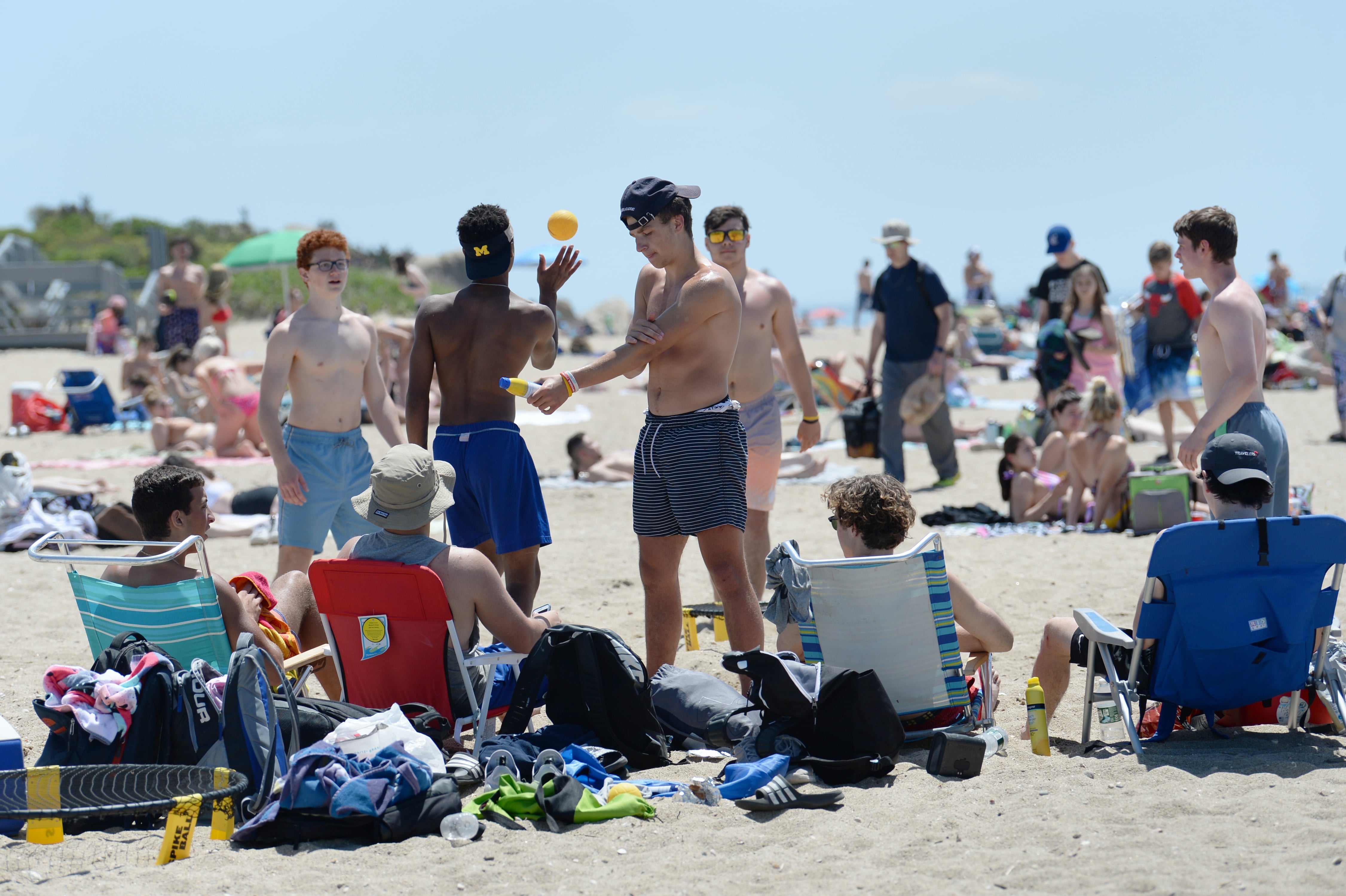 A group of friends hang out at Hammonasset Beach State Park Friday to kick off the Memorial Day weekend. At 7:30 a.m. there were 200 cars lined up waiting for the park to open and it was closed when they reached capacity at 12:15 p.m. according to a park ranger. Visitors were encouraged to leave 15 feet between groups.

Connecticut State Parks filled with visitors under sunny skies Sunday after rain showers and clouds began the long Memorial Day weekend the day before. Restaurants across Connecticut welcomed diners outdoors during the first weekend since the state eased some COVID-19 restrictions.

The first phase of opening the state back up came with a continued decrease in COVID-19 hospitalizations Sunday, though nearly 450 new confirmed cases since Saturday were reported, according to the governor’s office.

Several state parks were closed before noon on Sunday after parking lots reached capacity. Meanwhile, Osbornedale State Park in Derby was closed for an entirely different reason – as Connecticut State Police searched for a man wanted in connection with two investigations. Peter Manfredonia, 23, was seen leaving the scene of a homicide and serious assault on Mirtl Road in Willington Friday morning, according to state police. Second, Derby Police announced another crime scene related to Manfredonia Sunday morning after a person was found dead at a home on Roosevelt Drive, also known as Route 34.

State police closed Osbornedale State Park Sunday and advised people to stay away from the area. Manfredonia was believed to have pistols and long guns with him, according to police.

At about 3:30 p.m. Sunday, state police said a black 2016 Volkswagen Jetta with Connecticut license plate AU78524 and a bumper sticker that reads “Sandy Hook Tribute Victim # 26” related to the investigation had been found in New Jersey near the Pennsylvania border. Police had asked the public to be on the lookout for the vehicle earlier in the day. Police in Pennsylvania have joined the search for Manfredonia, according to Connecticut State Police. Manfredonia was last seen in East Stroudsburg, Penn., police say.

“UConn strives to do everything possible to identify and engage with students of concern and to provide them with all the assistance and resources we can both for their own well-being and that of the wider community,” UConn spokesperson Stephanie Reitz said in a statement.

Increase in confirmed cases and deaths from COVID-19

Gov. Ned Lamont announced a cumulative total of 40,468 confirmed cases of COVID-19 Sunday, an increase of 446 new cases from Saturday. There were also 18 more reported deaths related to COVID-19 since Saturday, bringing the total to 3,693. The number of hospitalizations continues to decline, as 701 patients with COVID-19 were hospitalized as of 4 p.m. Sunday —  a decrease of 23 people from Saturday — according to the governor’s office. Lamont has announced a date of June 20 for the second phase of reopening state businesses which would include hotels, gyms, bowling alleys and amusement parks if the number of hospitalizations and new cases continue to decrease.

State Parks across the state were closed early Sunday after parking lots filled.

There is no camping at state parks until at least June 11 by order of the governor’s office. Beaches at inland parks remain closed and swimming is not allowed. Swimming is allowed at Rocky Neck and Hammonasset, though beachgoers are asked to keep 15 feet between their blanket and other groups.

Those enjoying the day at parks and dining outdoors at restaurants are still urged to cover their nose and mouth with a face covering when around others, gather in groups no larger than five people, and stay at least six feet apart from other groups.

State and local leaders are working with restaurant owners to allow six feet of space between tables. Lamont announced Saturday the issuance of a state permit allowing Mystic Pizza, in Mystic, permission to use a state highway right-of-way for outdoor dining. Earlier in the week Southington Police announced the town would temporarily close Center Street to traffic in order to allow restaurants to expand outdoor dining.

Connecticut State Police responded to 4,306 calls since Thursday evening, the state police said Sunday morning. Police said there have been 108 car crashes on state highways over the holiday weekend – with one fatality – since Thursday.

Monday is forecasted to be another nice day for park goers and dining with temperatures in the mid-70s and sunny skies overhead.