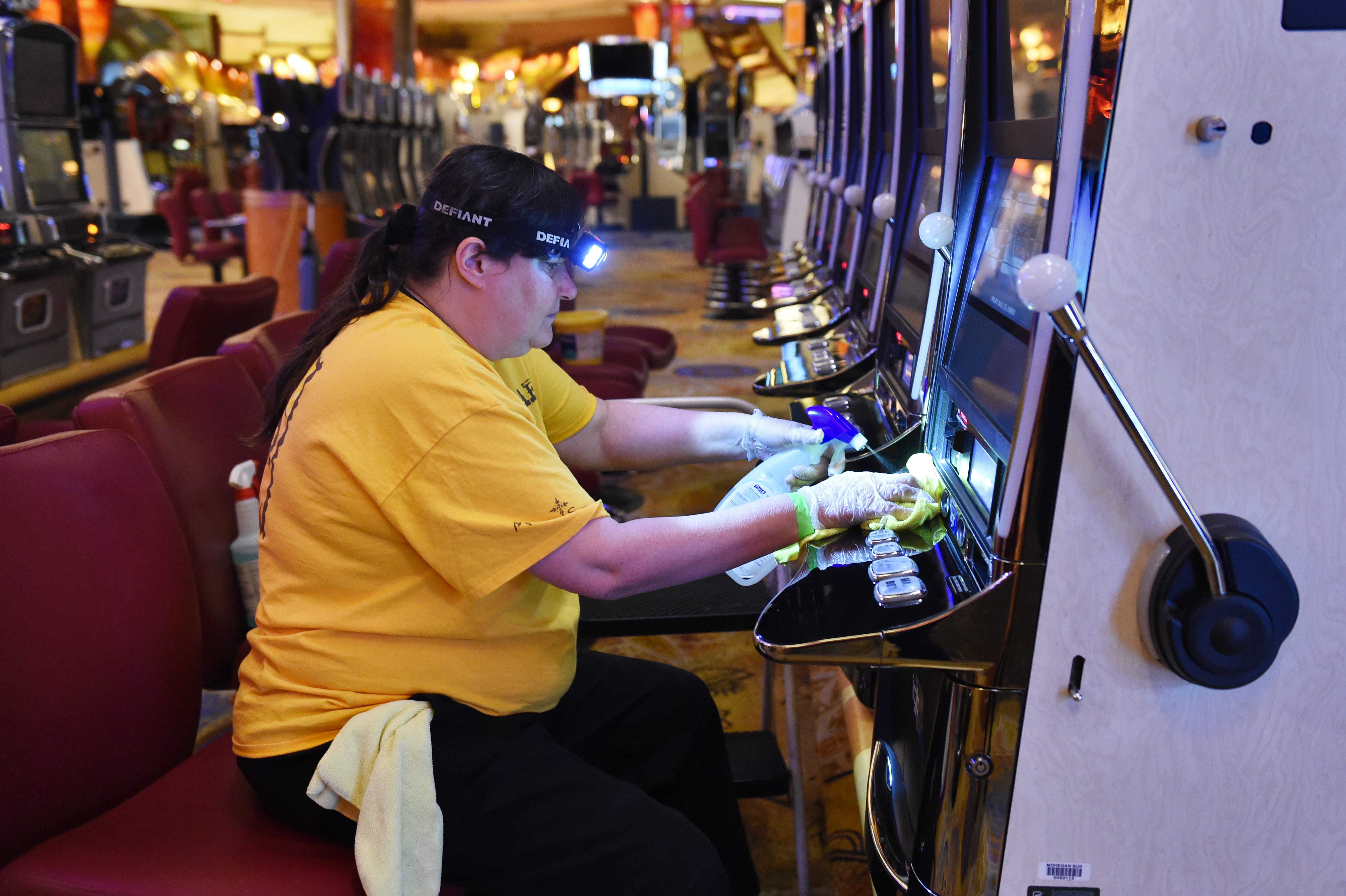 A Mohegan Sun staff member disinfects a row of slot machines as they prepare for reopening sometime in the coming weeks after shutting down on March 17 due to the COVID-19 pandemic. The casino is undergoing a floor-to-ceiling cleaning to ensure the safety of casino goers once they return.

Gov. Ned Lamont continued to express concerns Thursday about plans by Foxwoods and Mohegan Sun to reopen on June 1, saying tribal decisions to close two months ago may have contributed to relatively low rates of infection in eastern Connecticut.

“We have some of the lowest infection rates, not just in the state, but in the entire region, in eastern Connecticut, in part, thanks to the incredible sacrifice the tribes made,” Lamont said.

Lamont said representatives from his administration have visited both casinos in advance of next week’s reopening.

Both tribes are sovereign nations, which means they’re free to re-open their casinos when they choose. Casino officials have been pushing for a more aggressive reopening timeline from the state as their facilities hemorrhage millions of dollars and thousands of employees lost their jobs.

Lamont has used the bully pulpit of his daily media briefings for weeks to urge the two tribes to keep the casinos closed while the state works to slow the spread of the novel coronavirus.

Lamont said if the casinos do reopen on June 1, he’d like to see the tribes voluntarily adopt measures like capping crowd capacity and temporarily suspending the sale of alcohol.

Mohegan Sun said in a safety guide posted to its website that it’s made a number of safety-oriented changes, including temperature checks for new casino guests, closure of certain slot machines to promote social distancing, and revamps of heating and cooling systems to incorporate more outside air.

Rodney Butler, chairman of the Mashantucket Pequot Tribal Nation, said Thursday that Foxwoods has implemented various crowd control and safety measures to keep guests safe when the casino reopens in a few days.

About 5,000 employees at Foxwoods lost their jobs due to the pandemic.

Butler said the roughly 1,500 employees at Foxwoods who have been called back to work during the casino’s first phase of reopening appear eager to get back to work, despite the continued spread of the novel coronavirus.

“It will certainly help with the regional unemployment numbers, but we’re still far off from where we should be,” Butler said. “That gives you perspective of … what Foxwoods will be when it reopens. Think about that, we’re opening with about a third of the employees that we had.”

Butler said the casino has “burned through several million a week” due to the closure. He said the goal is to open, and get patrons used to the new social distancing requirements.

“For us, it’s not about trying to take advantage of a situation economically,” Butler said. “We feel like we have put in the right procedures to do this and do this safely. And that’s why we’re opening.”

Connecticut Department of Labor Commissioner Kurt Westby said Thursday his agency has paid out over $751 million in unemployment benefits since March. Additionally, the state has paid out $1.2 billion in additional federal benefits authorized by the CARES Act.

“We are very quickly disbursing a lot of money into the economy,” Westby said, adding that the processing time for applications in Connecticut has gone from around six weeks at the start of the pandemic to around one to two weeks today.

Westby said his department has received more than 567,000 unemployment applications since March and that his office has processed over 536,000 claims.

“That’s over four years of what we would call ‘normal’ application activity, done in two-and-a-half months,” Westby said.

Westby said his department is now working to beef up its care unit for residents who need assistance navigating the complex process of filing for state and federal unemployment benefits.

The planned rollout for the response center is mid-July, Westby said.

There’s a pandemic, and businesses need to adapt to ensure employees survive

The way businesses have operated for decades will have to change as they reopen during the COVID-19 pandemic, said members of the Reopen Connecticut Advisory Group’s community committee Thursday.

During a roundtable call Thursday, the committee was joined by officials from the Service Employees International Union, or SEIU, which represents frontline workers across Connecticut.

“If they are essential let’s make sure that they are working in an environment that takes care of them,” Palache said. “That they don’t have to bring home a virus to their family members.”

Palache said the past few months have shown these workers must receive a living wage and affordable health insurance.

According to the judicial branch, 10 courts have remained open through the pandemic: the Supreme and Appellate Courts, the Judicial District courthouses in Bridgeport, New Britain, New Haven, New London and the Geographical Area Courthouses in Hartford (No. 14) and Waterbury (No. 4); and the juvenile courts in Hartford and Bridgeport.

State officials said in a news release that, “beyond these locations and the three courthouses resuming partial operations effective June 8, all other courts will remain closed until further notice.”