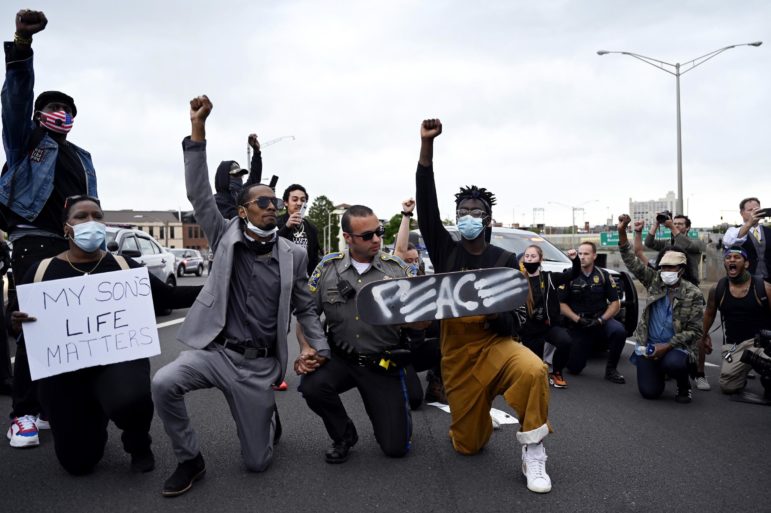 Connecticut State Police Trooper Maurice (who declined to give his first name) kneels with Abimbola Oretade on his left and David Walker on the right during the Self-Defense Brigade Anti-Oppression Rally for George Floyd that shut down I-84 in Hartford.

The group of protesters started marching through the streets of Hartford around 2 p.m. and wouldn’t stop until more than five hours later. When they spread out across I-84 near downtown Hartford, stopping traffic, they had one request for state police.

And while one state trooper told protesters that the highway was not the place to discuss change, several protesters talked to other officers, asking them to kneel in solidarity. Eventually, some joined hands and did.

Lt. Jack Goncalves said he felt like it was the right thing to do.

“I’m sure they feel hurt, betrayed,” Goncalves said. “And, you know, we understand that.”

After hours of marching through Hartford, protesters walked onto I-84  — shutting down traffic as a way to continue to draw attention to police brutality across the country and the state. Monday marked one week since George Floyd was killed by a Minneapolis police officer who’s since been fired and charged with third-degree murder.

Summer Gilberto of Enfield was one of the protesters working to persuade state police to kneel.

“They need to show solidarity constantly,” Gilberto said. “Not just now when we begged them after standing on the highway for a half hour. It needs to be constant, and we need to know that.”

Madison Frame, a 20-year-old Hartford resident, said that changes to police conduct and the laws that protect them have to be put down on paper.

Physical confrontations and arrests were avoided during the daylong protest.

At one point, Hartford mayor Luke Bronin came out onto the highway to address protesters. He told them that stopping traffic prevented ambulances from getting to hospitals.

“When emergency vehicles can’t get through, people die,” Bronin said. 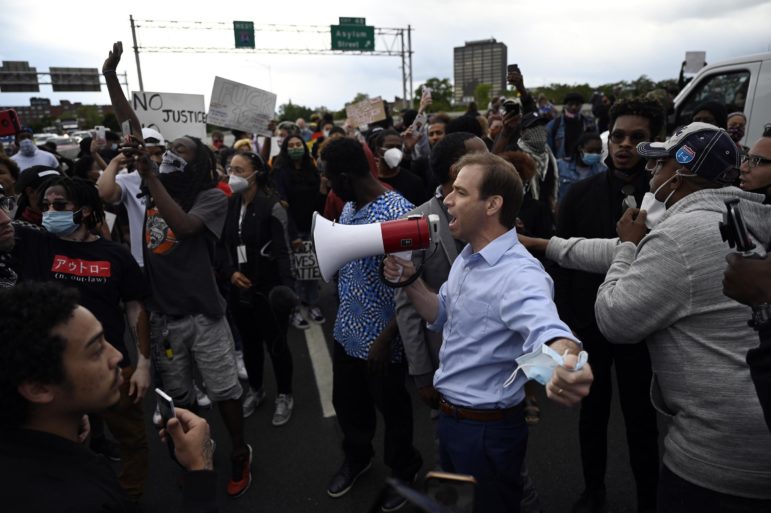 Hartford Mayor Luke Bronin talks to protesters as the Self-Defense Brigade Anti-Oppression Rally for George Floyd blocks I-84 at the Asylum Street exit in Hartford on June 1.

But what he said seemed to strike the wrong chord with Black protesters, many who said they already feel like their communities are less safe with police presence and lives aren’t valued the same as those of white people.

“Keep yourselves safe, help us keep everybody else safe, that’s all I’m asking,” Bronin said. “I stand with you and I’ll stay with you all night, but come off the highway so we can help keep people safe.”

Earlier in the day, the same group of protesters made their way through the city.

Soraya Chanterelle and her sister walked alongside hundreds of protesters down Albany Avenue.

“So many people are protesting all around the world for George Floyd and it can feel like here it doesn’t really affect us, so we wanted to emphasize that people in our own state get killed all the time too, you know, and it’s not just about one man, it’s about all of them,” Chanterelle said. 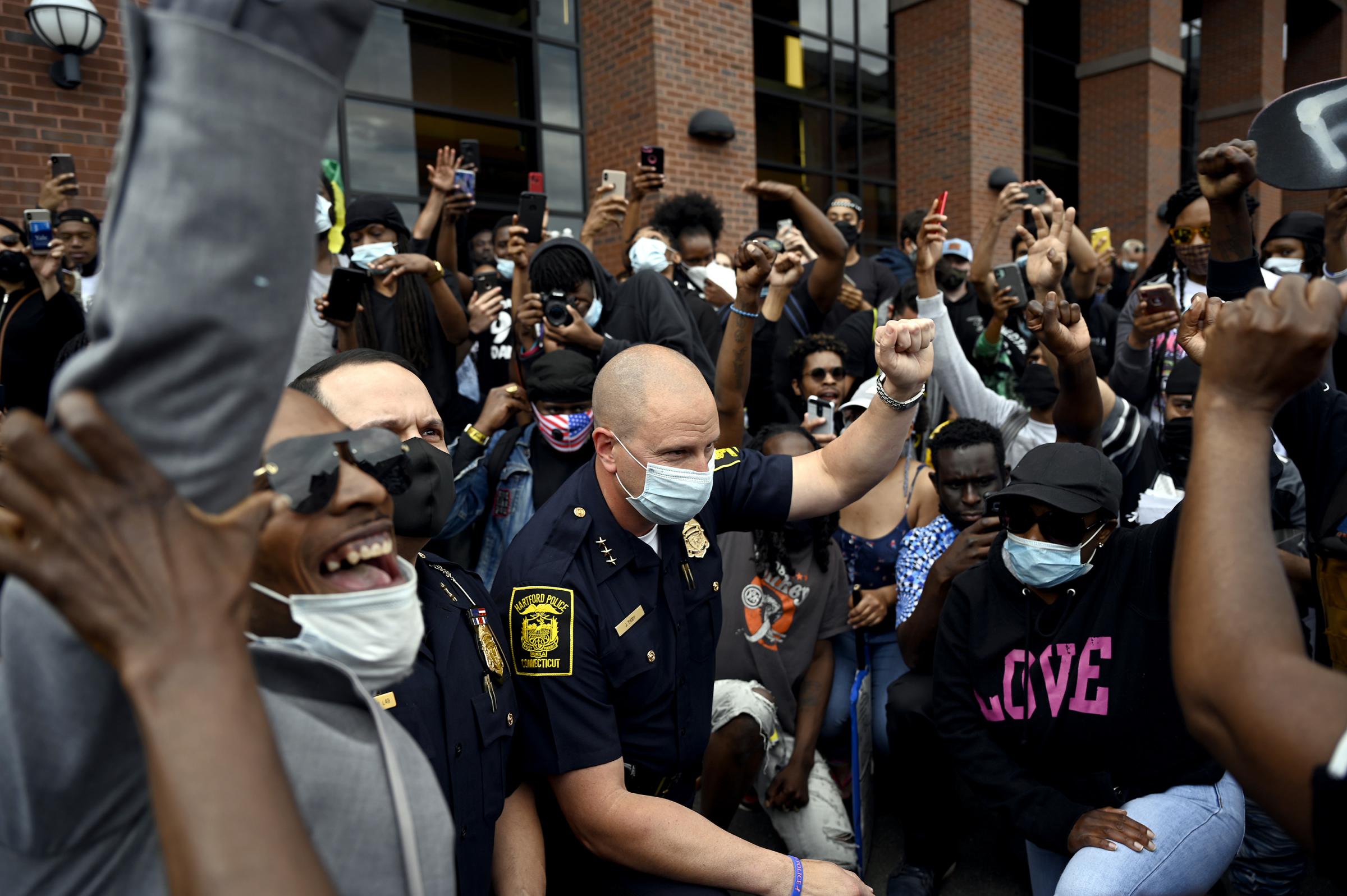 Hartford Police Chief Jason Thody takes a knee at the Hartford Public Safety Complex with protest leaders during the Self-Defense Brigade Anti-Oppression Rally for George Floyd in Hartford on Monday, June 1, 2020. After marching from Keney Park to the Hartford Public Safety Complex, to the state Capitol and back to the public safety complex, protesters met with Thody and his second-in-command before moving on and blocking I-84 at the Asylum Street exit in Hartford.

Mike Oretade said police need to be taught how to do their jobs correctly.

State police released a statement on Floyd’s death, saying that the officer used “completely unjustifiable force against someone in handcuffs” and that his conduct created deeper distrust within communities of color.

Hayes, whose husband is a Waterbury police officer, called the death of George Floyd an execution that was witnessed by other police officers. She said if she and her husband, who are both black, are ever pulled over by police, her husband puts on the dome light of the car and puts his hands on the steering wheel. She said that’s because they can’t trust what will happen in the five seconds it takes to tell the officer he is law enforcement and carries a firearm.

Hayes said there shouldn’t be any bad police officers at all.

“This is a profession where there is no room for a few bad apples,” she said.

“We hear you,” Rovella said, urging people to stay off highways while protesting, citing the danger for protesters and police officers before the highway can be shut down.

Both Hayes and Lamont expressed concern that protests are happening in communities most affected by COVID-19 in cities. Hayes said she herself didn’t join protests this weekend but attended church to pray for George Floyd. She said there are many ways people can have their voices heard.

Lamont was one of the governors on a conference call with the president Monday morning, reviewing the events of the weekend, as protesters demonstrated against police brutality and riots erupted in some places. He told a community conversation in Waterbury the president’s message was the opposite of unifying.

“His answer was, ‘Let’s declare war, let’s declare war on these protesters. These are anarchists, these are people trying to tear down our country. And what’s the matter with you governors?’ This is what he said,” Lamont said. “He called us fools, and jerks and weak, for not bringing out the armed forces and declaring war. And my message to each and every one of us is — do not play into that cynical game.”

The White House has said that the primary focus of the call was encouraging the deployment of the National Guard at protests.