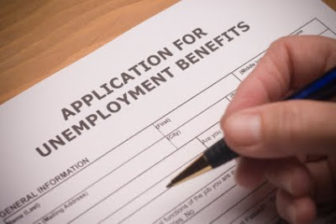 The state announced Thursday that unemployment remains at historic highs, though new weekly claims are slowing.

“Yes, those numbers have been coming down,” Westby said. “They’re lower, but even the 18,700 — those are still record levels.”

Most new claims are taking between 1 and 2 weeks to process, he said.

Westby says the average weekly claims in the last recession peaked at 10,000. He also said Thursday that the state unemployment insurance program has paid out $76.25 million in addition to $1.46 billion paid under federal COVID-19 unemployment programs.

Westby said the state’s trust fund balance is $64 million. The state intends to borrow $300 million this month to be able to continue to pay claims.

Hartford HealthCare announced Thursday that it will begin to allow one visitor — or escort — per patient for procedures and surgeries. Starting next week visitors will be allowed for patients admitted to the hospital for short-term, acute care.

Visitors at Hartford Healthcare hospitals will be screened for COVID-19, and must test negative in order to stay on site. Visitors will be required to wear face masks.

People with patients having procedures and surgeries this week will stay with the patient in a modified waiting area with social distancing in place. Patients with a documented need for a companion will be allowed to have an escort stay with them.

There were 148 new cases of COVID-19 reported in Connecticut Thursday, according to public health data. Numbers released Thursday say 373 people are now hospitalized with COVID-19 in the state, 33 fewer than yesterday. Eighteen more people died with COVID-19 since yesterday, bringing the total to 4,007.

Connecticut teachers have concerns about their own health and safety, as well as that of their students, when schools reopen, according to a new survey by the Connecticut Education Association,

Nearly two-thirds of teachers surveyed said their schools are not equipped to provide for frequent and sufficient hand washing for students and staff to reduce the spread of the virus.

Of the nearly 3,000 teachers who participated in the survey in late May, 43 percent reported they are at higher risk for severe illness from COVID-19, and the number increases to 71 percent for teachers with 30 or more years in the classroom.

The CEA is calling for the following precautions once schools reopen:

A group of workers deemed essential through the pandemic joined state legislators on the steps of the State Capitol Thursday asking for expanded workers compensation, hazard pay and additional access to personal protective equipment

“We don’t get to call them essential workers and treat them like sacrificial lambs,” said State Rep. Robyn Porter, New Haven and Hamden, who serves as the chair of the Labor and Public Employees Committee.

Randall Van Cole, a security Officer for SecurAmerica who works at The Hartford, said many guards who work at the property and casualty insurer can’t afford the health insurance offered to them. He said he comes in contact with hundreds of people a day. Van Cole, who is a member of the 32BJ SEIU labor union, said he is worried about bringing the COVID-19 virus home to his family and called for paid family and medical leave, affordable health insurance and workers compensation.

Fast food employees have similar concerns. Mario Franco, former night shift manager at the McDonald’s at the Darien Service Plaza, spoke with State Rep. Edwin Vargas, of Hartford, translating. Franco said he worked at McDonald’s for more than 26 years, but said he lost his job due to COVID-19.  Franco, a 32BJ SEIU labor union member, said the most important thing service workers need are proper PPEs and clean places of work.

“What those workers are asking for is recognition and a helping hand at a time that we have asked them to carry our state through a public health emergency, that is this pandemic,” McGee said.

The courthouses set to reopen on June 29 are: the Judicial District courthouses in Danbury, Milford and Stamford, and at the Geographical Area No. 11 courthouse in Danielson.

The phased in reopening will bring the number of open courthouses to 17 – including the supreme and appellate courts, 13 Superior Court locations and two juvenile court locations.

A new walk-up COVID-19 testing program is planned to begin Monday at the Duggan School in Waterbury. The program, offered through St. Mary’s Hospital  and the city of Waterbury, will offer walk-up testing at Duggan School on Tuesdays and the Waterbury Police Activity League (PAL) on Thursdays from 9 a.m. to 4 p.m., weather permitting.

No appointment or prescription will be necessary to be tested.

CT Trails Day will be do it yourself

The organizers of CT Trails Day still encourage residents to get outside, but in small groups. The event, traditionally held on the first weekend of June, will be self-guided this year, the Connecticut Forest & Park Association announced Thursday.

“The goal of Trails Day is to raise awareness of the rich diversity of trails in Connecticut. Today, maybe more than ever, we all need the mental and physical benefits that getting out for a walk can bring,” Eric Hammerling, CFPA Executive Director, said in a statement.

Ali Warshavsky contributed to this report.