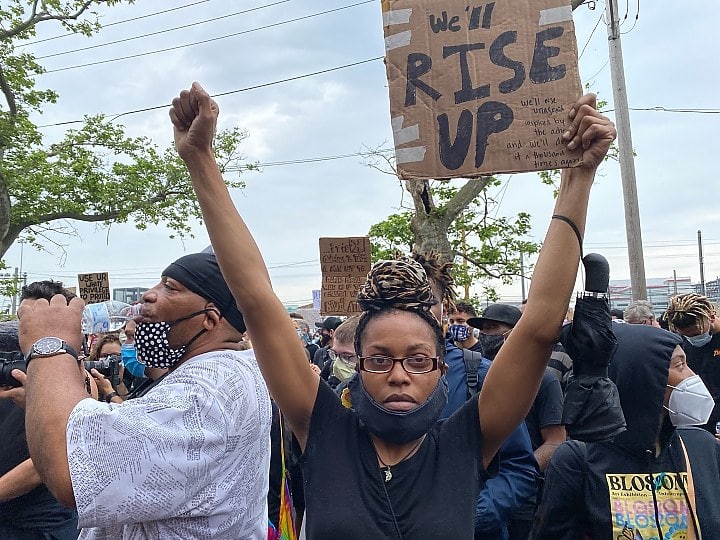 Kharisma Redding in crowd outside police HQ: “This is every black princess’s dream come true.”

New Haven — Led by young people chanting “Money for schools not for police,” a crowd took off from the Green Friday for a Black Lives Matter march against police violence.

It was the latest protest in New Haven — and around the nation — sparked by the killing of African-Americans by law enforcement, most recently the Memorial Day death of George Floyd in Minneapolis.

Before the march began, members of the Citywide Youth Coalition read a list of demands that included switching $33 million of police department funding to schools and social needs; eliminating school resource officers; “ending the triple occupation of New Haven” by Yale, Hamden, and New Haven police. (Read about the full list of demands here.)

“Y’all are amazing. Look at this city!” declared Ala Ochumare of Black Lives Matter. “This is a peaceful uprising. This is not a riot. We are out here demanding our liberation for all people.”

Veteran protest organizer Norm Clement urged those in the crowd to write the phone number 203-896-7221 on their arms in case they get arrested. The number is for the National Lawyers Guild. “They will contact the CT Bail Fund. And we will come and get you,” he said.

Then, after a moment of silence, the crowd took to Elm Street and travelled down State Street and points beyond. It appeared that hundreds were turning into thousands of marchers.

By the time it reached Cafe Nine at State and Crown, the line of marchers extended back to Elm Street. “That’s how big this movement has grown!” Ochumare declared as marchers up front sang “We’re going to be all right!,” danced in place, and waited for others to catch up. 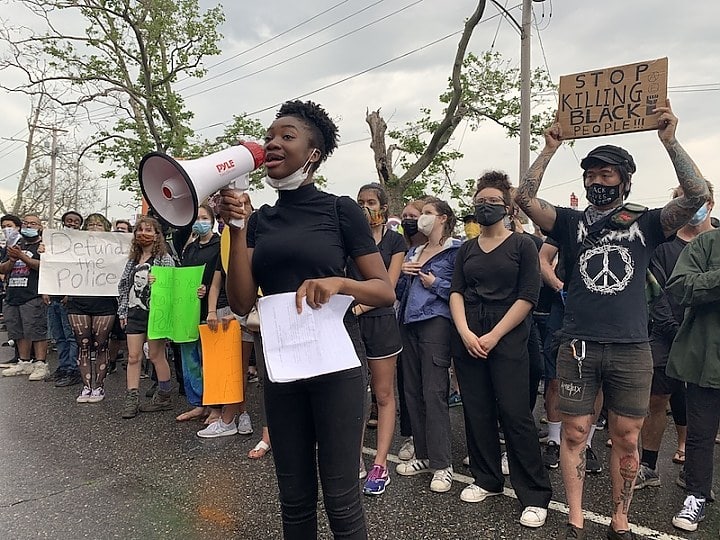 Board of Education student member Lihame Aroumas  read aloud the Citywide Youth Coalition’s rally demands, which includes the prosecution of officers who have killed civilians with the “full weight of the law.”

“We don’t leave nobody behind!” declared Youth Coalition organizer Addys Castillo. “We’ve got plenty of time! … We’re going to stay here and take up all the space we want to take up.”

The head of the march arrived outside the Union Avenue police headquarters shortly before 4 p.m. Ochumare called forward “white folks and marshals” to plan next steps. The strategy was to put white people up front and throughout the crowd so they would share in any attacks.

“Use your privilege!” called one marcher.

Unlike at a protest Sunday, the marchers were not greeted by a phalanx of officers guarding the platform by the station’s entrance. A tent was set up. And off to the side stood Police Chief Otoniel Reyes and his assistant chiefs.

Amid speeches, Ochumnare reminded the crowd that this was a youth-led peaceful protest. She directed “rabble-rousers” with different agendas to leave.

“This has been a dream come true. This is like every black princess’s little dream coming true,” said Kharisma Redding, who grew up in New Haven, as she joined in the chanting outside the police station. “We are for the liberation of our people. We are for the freedom of our people. People like me, our ancestors never stopped telling us what the truth was. We belong here. I know who I am. I know who we are. I’m here.”

Board of Education student member Lihame Aroumas  read aloud the Citywide Youth Coalition’s rally demands gain, including prosecution of officers who have killed civilians with the “full weight of the law.”