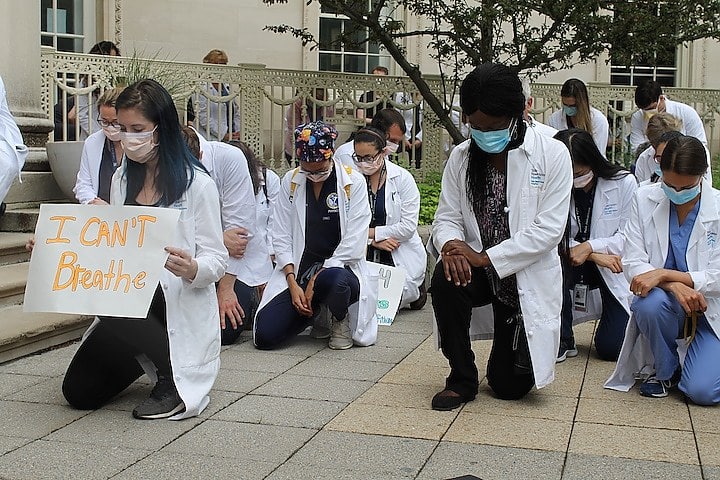 Thousands of demonstrators across Connecticut joined protest marches and rallies Saturday in the growing movement for racial justice triggered by the Minneapolis police killing of George Floyd and other incidents of police violence against people of color.

Gatherings of protesters calling for reforms took place in more than a dozen cities and towns around Connecticut as they did all across the nation —  everywhere from Washington, D.C., to Los Angeles, Calif.

The largely peaceful mass demonstrations came despite renewed warnings from medical experts around the nation about the likelihood the marches and rallies could contribute to another surge in COVID-19 infections.

There were news reports Saturday of people who tested positive for the coronavirus after attending marches in Kansas, Georgia, Ohio and Oklahoma. Experts say it may take several weeks before there is any evidence of widespread increases in infections in the wake of the demonstrations.

COVID-19-related deaths in Connecticut reached 4,055 Saturday, an increase of 17 fatalities. But Gov. Ned Lamont has said steady declines in the number of people being hospitalized for the disease will allow the state’s economy to gradually reopen. Total hospitalizations for the disease dropped to 333 according to the latest report.

The number of coronavirus tests jumped by 8,160 in the past 24 hours, bringing the total of people tested since the start of the pandemic to 293,474. New tests showed that another 358 people were positive for the virus, and the total number of confirmed cases in Connecticut now stands at 43,818.

The next phase of Lamont’s reopening plan is now scheduled for June 17 when restaurants will be able to serve customers indoors again and gyms, nail salons, libraries and some other businesses and institutions will be permitted to open their doors.

Despite the risk of more coronavirus infections, there were multiple peaceful protests in Hartford and New Haven Saturday with themes such as “No Lives Matter Until Black Lives Matter,” and “Silent March of Black Female Attorneys.”

In Clinton, a popular shoreline outlet shopping center was closed Saturday after looting threats against it were reportedly posted on social media.

On its Facebook page, Clinton Crossing officials posted the following message: “We are deeply saddened and troubled by the murder of Mr. Floyd and mourn his senseless loss. We stand united for racial equality and pray for the healing of our communities.”

Connecticut’s Black Lives Matter protests continued to be generally peaceful Saturday, and the presence of officers in riot gear was considerably reduced from earlier days.

While police in some cities have resorted to violent tactics and mass arrests, law enforcement officials in Connecticut have responded to the protests with far less force and few arrests. Some police officers here have even taken a knee at demonstrations to show their sympathy in the wake of Floyd’s death.

Floyd was killed in Minneapolis when police officer Derek Chauvin  put his knee on Floyd’s neck for nearly nine minutes as Floyd lay handcuffed on the pavement. Chauvin and three other Minneapolis police officers are now facing criminal charges in connection with the killing.

Connecticut protesters are angry as well about recent incidents in this state when police killed unarmed people of color. State lawmakers and activists are calling for a variety of reforms including independent reviews of cases of police killings and alleged brutality, and even shifting public funds away from police departments to agencies and programs that serve underprivileged people in Connecticut.