Another day of activism after George Floyd’s death, as the state continues plans to reopen 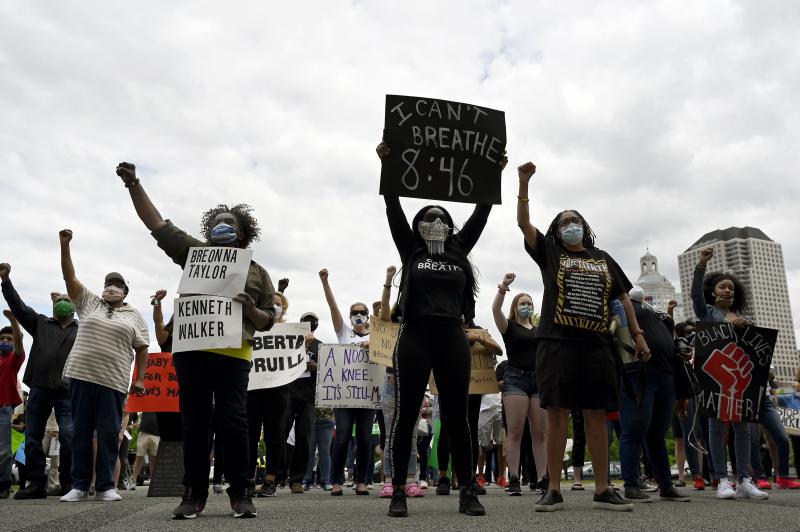 Ebony Barnes 44, (center) of Bridgeport during the Caravan 4 Justice gather at the Connecticut State Capitol to peacefully demonstrate against the systematic abuse of police power perpetrated against the black community on June 7, 2020 in Hartford.

A caravan of cars that began in Stamford and stopped in four other towns before making its way to the State Capitol in Hartford on Sunday was among dozens of rallies, demonstrations, and protests this weekend after the recent death of George Floyd in Minneapolis.

The rally that ended in Hartford was organized by black women activists and legislators and CT Caravan 4 Justice to peacefully demonstrate against racism and the systemic abuse of power by law enforcement in black communities. It was also an opportunity to remember and highlight black women like Breonna Taylor who have died at the hands of police.

“Can a sister sleep?” asked Janice Fleming Butler, founder of Voices of Women of Color. The crowd shouted back, “No!”

Rallies and protests against racism and police brutality picked up worldwide shortly after George Floyd, a 46-year-old black man, died after a white police officer used his knee to pin down Floyd’s neck to the ground in an attempted arrest two weeks ago.

Four police officers involved in the arrest were fired, and all have been charged with crimes.

Activists said they want justice, too, for Taylor, a 26-year-old emergency room technician who in March, shot to death by Louisville police officers as they raided her home after midnight. No charges have yet been made in her case.

“We demand that the legislators ensure that independent reviews on police officers happen,” Butler said. “We demand that you modify the standards in which officers are prosecuted in the state of Connecticut.”

State Sen. Marilyn Moore, a co-leader of Sunday’s rally, pledged to represent and give a voice to black residents and communities as a legislator, but said, “I cannot do this forever,” and she called on young people to “pick up the mantle.”

“We have to build them up, we have to train them and we have to support them,” she said. “Us older people need to step back and let these young people lean in, support them, educate them, raise the money for them, and get behind them to do what it is they need to do.”

This was the second day of weekend protests. In New London on Saturday, protesters had similar demands, calling for money to be moved from the police budget to the city’s schools.

“I think people are finally starting to wake up and see what the problem really is. It’s my life, it’s all the people in my family’s life, friends, the people I grow up with. I’ve seen a lot of injustice to myself and the people I care about – I just want it to stop.”

Officials have expressed concerns that those protesting are exposing themselves to an increased risk of being infected with COVID-19. But, in the short term, the numbers are still trending in the right direction.

The state reported a flattening of hospitalizations related to COVID-19. The number of patients currently hospitalized with COVID-19 remained at 333 Sunday – the same number that was reported Saturday.

With Phase 2 of Connecticut’s reopening efforts set for June 17, the Connecticut Department of Economic and Community Development released new details about how indoor dining, amusement parks, hotels, gyms, movie teachers, tattoo parlors and a wide range of other businesses can welcome people back.

The state says employees in all industries will have to go through self-certification training and businesses will have to name a program administrator before reopening. Employers will have to keep logs of employees’ hours to promote contact tracing, and staggered shifts and breaks are encouraged.

Residents are urged to call 211 to report any businesses not complying with state regulations.