Connecticut businesses ready to reopen but worry whether customers will return 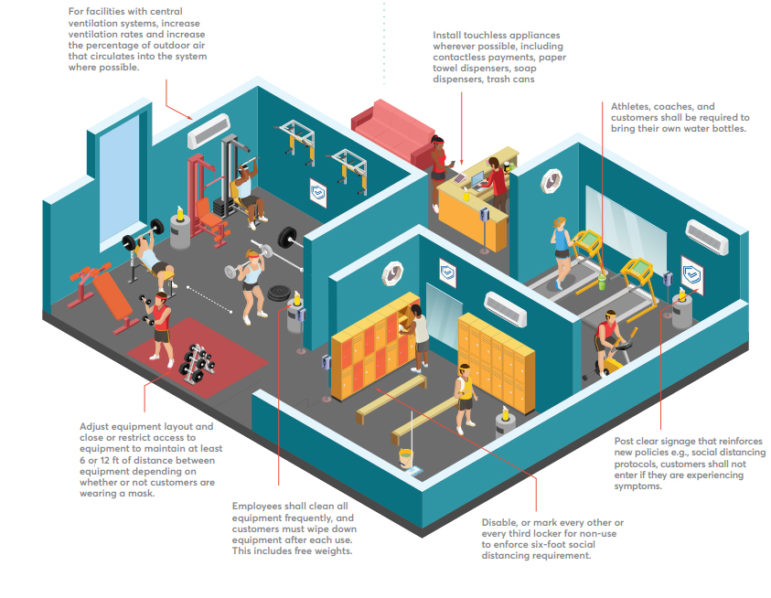 For some Connecticut businesses scheduled to reopen on June 17, the worry is finding enough disinfectant. For others, the biggest question isn’t about opening their doors but whether anyone will be coming through them any time soon.

Most business operators contacted Monday said the new guidelines issued by Gov. Ned Lamont’s administration for the next phase of Connecticut’s economic re-start the COVID-19 era were about what they’ve been expecting for weeks.

Lamont said Connecticut will be “opening up about 95 percent of our economy” by June 17. At his regular daily briefing Monday, Lamont said the ongoing declines in hospitalizations and infection rates are on track to allow the second phase of the reopening to proceed as planned.

“We think this is a calculated risk,” Lamont said. “The percentage of people testing positive has been going down.”

State tests for the coronavirus totaled 305,996 Monday, an increase of 5,715 from the day before. Those tests resulted in just 124 new cases of COVID-19, according to the latest state report.

An additional 13 coronavirus-related deaths were reported, bringing the number of Connecticut’s pandemic fatalities to 4,084.

Hotels, bowling alleys, amusement parks, nail salons, tattoo parlors, gyms, and fitness centers are among the types of establishments that will be allowed to reopen next week after being closed for months because of the pandemic. Restaurants will also be allowed to serve patrons indoors, but with strict social distancing in place. Bars and nightclubs are still not allowed to resume business under the state rules.

Pat Toth, owner of Prime Time Fitness in New Fairfield, said he’s having trouble finding enough disinfectant and cleaning supplies for the weeks ahead. “I have some, but it’s not going to last.”

“You can’t get it,” Toth said, citing a long list of retail stores and internet sites he’s tried. “They say it’s coming, but they don’t have it now.”

Connecticut hotels, inns and bed-and-breakfasts are also on the June 17 reopening list and are “well prepared” as far as training and cleaning supplies go, according to Steve Matiatos, president of the Connecticut Lodging Association. 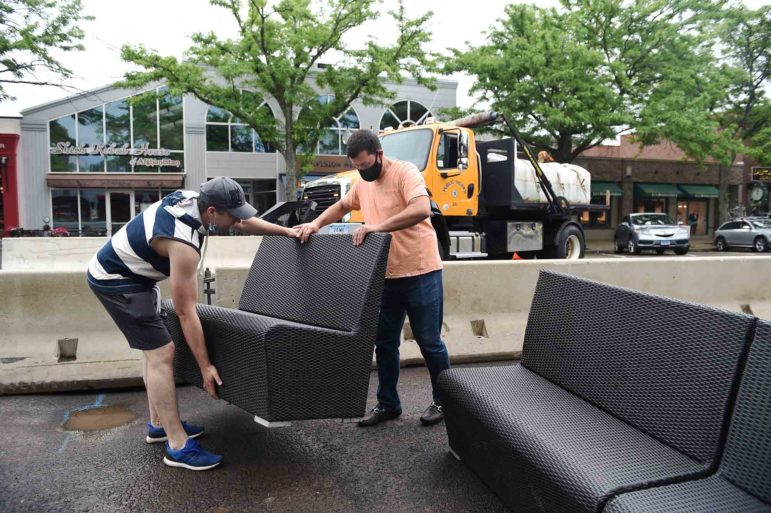 Kloden Lamaj (left) helps Dorjan Puka (right) place a banquette to define the boundary of new outdoor dining space for Avert, one of four restaurants owned by Puka, on LaSalle Road in West Hartford. Indoor seating at restaurants will be allowed beginning June 17.

Matiatos, who served on Lamont’s business reopening advisory panel, said the frightening part of reopening for hotel operators is whether their customers will be coming back while concerns about the pandemic remain.

“Our outlook right now is very bleak for the remainder of the year,” Matiatos said. There is likely to be some demand for hotel accommodations near tourist attractions along the Connecticut shoreline, according to Matiatos, but he added that other areas of the state aren’t likely to see much hotel business.

“Most of our members have been preparing for weeks and are ready to go,” Bart Burger, managing director of the Bowling Proprietors Association of Connecticut, said Monday. “The reason we’re prepared is that we’ve been able to learn from similar businesses around the country in states with very similar protocols.”

Burger said he expects that almost all of the 30 bowling alleys that are members of his organization plan to be open on June 17. He said bowling establishments have always sanitized bowling shoes and other areas, but are now focusing on being more deliberate and doing it “in front of the eyes of our guests so they feel more secure.”

Not all businesses and institutions on the June 17 list for reopening are planning to do so. Mystic Aquarium officials, for example, are going to wait until June 20 to reopen their indoor exhibits to the public.

The aquarium has had its outdoor exhibits open for the public since May 20 but has a big indoor renovation project underway and officials have decided to wait until June 20 to fully reopen.

The pandemic-related shutdown has allowed the aquarium to perform a major renovation on its “shark touch tank,” according to Nate Fague, director of safety and security for the aquarium. “It’s one of our main attractions,” he said.

Fague said the aquarium, one of Connecticut’s top tourist attractions, has “expanded custodial coverage to all three shifts” and invested in new cleaning supplies and procedures and additional custodial training.

But Judge Hall disagreed, saying in her ruling that the difficulties in waging a petition campaign during a pandemic period of social distancing are tough but not impossible.