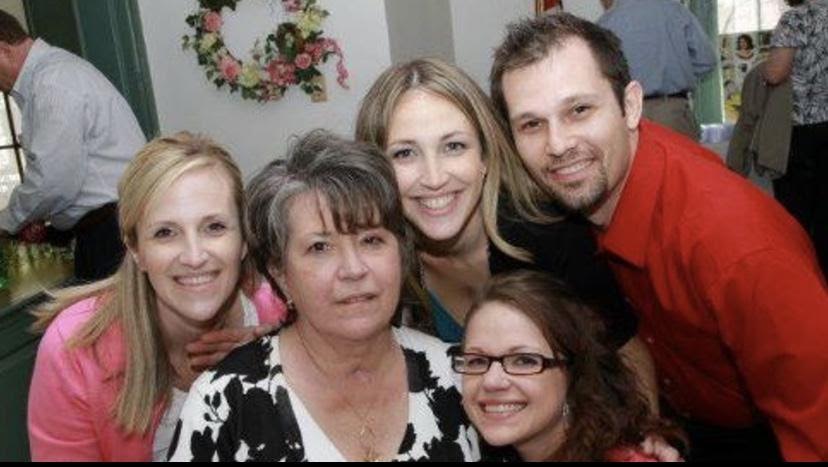 Joan Parsons, center, is one of three Connecticut residents at the center of a complaint against the state over its hospital visitation policy for people with disabilities. Parsons, who is disabled, was not allowed to have any family with her while she was being treated for COVID-19. Here, she is surrounded by her children at a 2011 celebration of her recovery from a brain aneurysm. Her children, from left: Michelle McDuell, Susan Fandacone, and Michael Parsons. Meaghan Parsons, with glasses, is at the bottom on right.

Patients with disabilities will be allowed to have a support person accompany them in Connecticut hospitals despite visitor restrictions during the COVID-19 pandemic as a result of an agreement announced Tuesday between the state and the federal Office of Civil Rights in the U.S. Department of Health and Human Services.

The development is a victory for several disability rights groups that filed a complaint with the Office of Civil Rights last month on behalf of three Connecticut residents with disabilities, asserting that the lack of a statewide policy allowing patient support for those residents violated their equal rights and jeopardized their quality of care.

“We are grateful that the Office for Civil Rights acted quickly and decisively to ensure that Connecticut protects the rights and safety of people with disabilities. It persuaded our state to do what should have been done from day one — assure that every individual with a disability hospitalized in Connecticut has equal access to care,” said Bob Joondeph, interim executive director of Disabilities Rights Connecticut, one of the groups that filed the complaint. “Because the state now has a clear written policy, patients with disabilities can expect to have their rights upheld and not be subject to discriminatory practices that diminish their quality of care or access to treatment.”

Roger Severino, director of the Office for Civil Rights, told reporters Tuesday, “We have heard too many heart-wrenching stories of people literally dying alone in this crisis. And this goes a big step forward to making sure that people with disabilities are not left alone and are not left to fend for themselves when reasonable modifications can be made.”

“We hope this will be a model for other states to follow when it comes to visitation policies,” Severino said.

Gifford’s order says that people who need assistance in the hospital because of “the specifics of their disability” whether physical, intellectual or behavioral, may have one designated support person with them. If the patient is to remain in the facility for more than one day, two support people may be designated, provided that only one person is present at a time. The order also applies to outpatient clinics and surgical facilities.

It also specifies that any such support person must be screened for symptoms of COVID-19 and must comply with reasonable requirements imposed by the facility to minimize the potential spread of infection.

Severin said a health care crisis “is no time to relax enforcement of our civil rights law … How we treat our most vulnerable people in American society is a reflection of our national character.”

The complaint filed by the Connecticut disability groups last month said the state’s guidance concerning “no visitor” policies at hospitals during the pandemic allowed only narrow exceptions for support persons for individuals with disabilities who receive services from the state Department of Developmental Services, leaving large groups of people with disabilities without a support person. 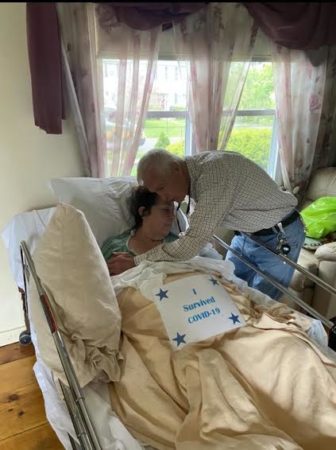 Courtesy of the Parsons family

Robert Parsons, comforts his wife, Joan, on her first day home from the hospital where she was treated for COVID-19. Because of the pandemic, she was not allowed to have a family member with her in the hospital which was particularly difficult for her because of her disability.

One of the three patients included in the complaint is Joan Parsons, 73, a Hartford area woman, who was left largely non-verbal and without short term memory after an aneurysm and several strokes about 11 years ago. Parsons, who was identified only as “G.S.” in the complaint, entered Hartford Hospital on April 19 because of a kidney infection but was quickly diagnosed with COVID-19.

Her daughter, Susan Fandacone, said Tuesday, “Our experience was terrifying and alarming. We are very relieved that no family will now have to go through the nightmare that we and other families have had to go through.”

The hospital denied a request for a family member to accompany Parsons, Fandacone said, which led to various problems, including a decision by medical staff to tie down Parsons and give her sedatives during a difficult procedure. Fandacone said this happened  because no one was there who could communicate with Parsons and calm her down.

“If you can imagine someone without short term memory, it’s like waking up in the middle of the night and people are coming at you with a mask that you don’t know and then are inflicting pain on you,” said Fandacone. “Nobody is reorienting you and explaining to her what was happening and she started to fight for her life.”

Fandacone said she and her family refer to the state’s new policy as “Joan’s voice, because it gives our mom, should she ever need to return to the hospital, and all others with disabilities, the voice they had been denied.”

The Office for Civil Rights also announced Tuesday that it had reached an agreement with Hartford Hospital to grant Parsons access to a support person to help with communication and comprehension.  Fandacone said that toward the very end of her mother’s 35-day stay in the hospital, she and her sister were allowed to stay — one at a time– with their mother. She came home from the hospital on May 23.

A statement from the hospital did not address the agreement with OCR but said that, in March, the health care system “made an unprecedented decision to restrict visitation across Hartford HealthCare, with clear exceptions when appropriate including exceptions for our patients with disabilities. Whenever barriers to care have been identified for any patient, including those with a disability, Hartford HealthCare works with patients and their families to implement effective solutions and accommodations in a timely fashion. “