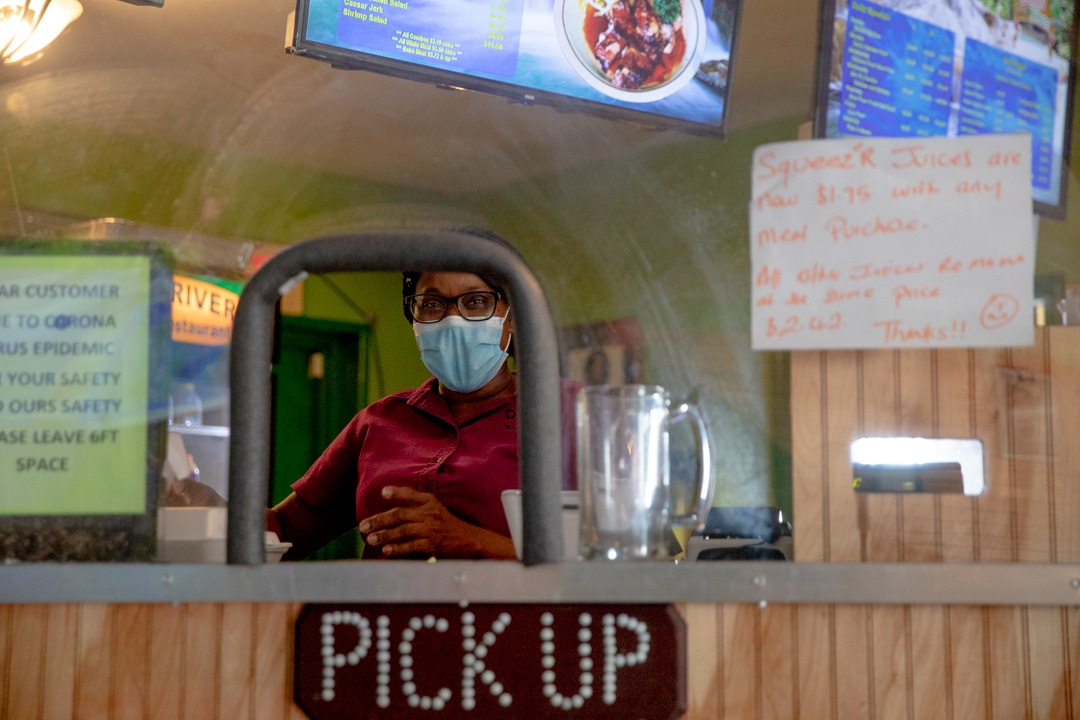 The Centers for Disease Control and Prevention on Friday released guidelines Connecticut and other states have been anxiously awaiting as they begin reopening their economies.

The CDC said public transportation and travel can still be risky and people need to think twice before they leave home. Mask wearing, frequent hand washing and use of hand sanitizer should continue.

And CDC officials warned states that have begun to open up, like Connecticut, may need to reinstate restrictions that were in force earlier this year.

“Right now, communities are experiencing different levels of transmission occurring, as they gradually ease up onto the community mitigation efforts and gradually reopen,” said CDC’s deputy director for infectious diseases, Jay Butler, told reporters during a press briefing. “If cases begin to go up again, particularly if they go up dramatically, it’s important to recognize that more mitigation efforts such as what were implemented back in March may be needed again.”

He also said “in the coming weeks we could see an increase of COVID-19 cases,” as states loosen restrictions and warm weather encourages socializing and travel.

So far, Connecticut has not seen a spike in new cases since loosening restrictions on businesses. The governor’s office released public health data Friday that shows the number of patients currently hospitalized with COVID-19 continues to decline, but has flattened a bit in the state’s latest daily report. The governor’s office said 244 patients are hospitalized in Connecticut with COVID-19 — two fewer than Thursday.

The number of cases of COVID-19 reported in the state went up by 228 and now stands at 44,689 overall since the start of the pandemic, according to the data. There have been 4,159 deaths associated with COVID-19 in the state after 13 more were reported Friday. 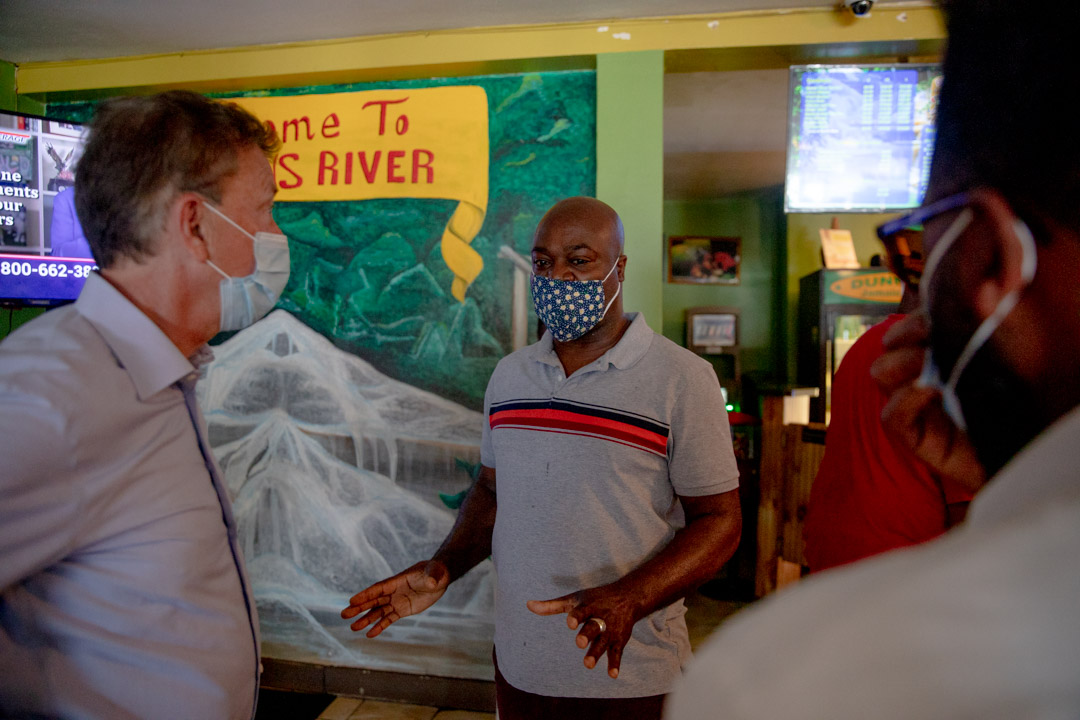 Mark Brown, center, talks to Gov. Ned Lamont, left, about his business at Dunn’s River Jamaican Restaurant in Hartford. Brown said that sales at the restaurant have been 40 percent of what they used to be before the coronavirus pandemic. Lamont toured the north end neighborhood where Brown’s restaurant is located.

The CDC’s director, Dr. Robert Redfield, called the new guidelines “common sense suggestions,” not mandates, and said it’s up to state and local governments to follow them.

“We will evaluate closely and take into consideration new CDC guidance as we move forward toward reopening,” said Av Harris, spokesman for the Connecticut Department of Public Health.

The guidance issued Friday included recommendations that people take the stairs, not the elevator, in hotels and ask friends to bring their own food and drink to cookouts and barbeques.

It also recommended calling ahead to restaurants and nail salons to make sure staff are wearing face coverings.

And Butler said “no high-fives or elbow bumps” at the gym.

He also said the pandemic is far from over.

“The vast majority of Americans still have not been exposed to this virus,” Butler said.

As demonstrators across the country are participating in large outdoor protests of racial injustice and police brutality, and as President Donald Trump prepares to resume large political rallies, the CDC also released “Considerations for Events and Gatherings.”

That guidance places at “highest risk”  large gatherings where it is difficult for people to stay at least six feet apart, especially in an indoor setting,  and where there are people from outside the community.

More than a hundred faith leaders and members of the Greater Hartford Interfaith Action Alliance led a march to Hartford City Hall Friday. They demanded better police accountability, transparency, and safer communities for their congregants.

Leaders from many faiths carried signs with the words “Black Lives Matter,” “Jews for Justice,” and “Quakers for Black Lives Matter.” Pastor A.J. Johnson of the Center for Leadership and Justice asked city and police leaders to commit to strengthening the Civilian Police Review Board and other changes to policing.

“We are grateful that police throughout Connecticut and in Hartford have been kneeling with us in support. We now ask you to stand with us in policy,” said the Rev. Jeff Powell, of New Antioch Baptist Church in Hartford.

Earlier this week, the Hartford City Council voted to reduce its police department’s budget by $1 million and reallocate $1 million within the department.

UConn Board Of Trustees meet with athletic budget looming

Operating deficits and the ongoing financial pain of the COVID-19 pandemic mean some sports programs at UConn could be on the chopping block.

The school’s board of trustees met Friday, but in a written statement to Connecticut Public Radio, a UConn spokesperson said a “detailed discussion” of the budget wasn’t planned and that the athletic department is expected to present a proposal in two weeks.

The agenda for Friday’s meeting included contracts for travel and catering but not budgets for individual sports.

The school’s athletic department reported a deficit of more than $40 million for 2019. Concerns over the spread of the novel coronavirus also led to the cancellations of the 2020 NCAA and NIT postseason basketball tournaments, as well as the entire spring sports season.

UConn is set to rejoin the Big East conference on July 1, which is expected to reduce travel costs for basketball and many other sports since conference opponents will be located closer to the Storrs campus.

The move out of the American Athletic Conference will put the football program as an independent and leaves the athletic department to negotiate its own TV deal and setup its opponents. CBS Sports announced a TV contract in May to broadcast UConn football games that will generate revenue for the school and give the program exposure through the 2023 season, with the option to extend the deal through 2027. UConn has a 12-game football season scheduled for 2020 — barring COVID-19 concerns affecting games.

UConn announced earlier this week a plan in place that could welcome students and staff back in August.

Legislators and advocates met virtually Friday to discuss support services available for the LGBTQ community during the COVID-19 pandemic.

“It has been interesting, discontinuing most services, but yet trying to be available to people for emergency situations,” said Linda Estabrook, executive director of the Hartford Gay and Lesbian Health Collective.

Eastbrook said her organization has been working to provide dental services and its STD clinic throughout the pandemic.

Eastbrook said her collective has hosted a Queer Prom for the last 26 years. This year, that prom will move online, and will be hosted live with a DJ on Thursday, June 25.

Rocky Neck State Park, in East Lyme, and Hammonasset Beach State Park, in Madison, were among parks closed after reaching capacity Friday. The Department of Energy and Environmental Protection also announced the early closure of:

State park and forest campgrounds are closed with an anticipated opening date of July 8 for most campers. People with recreational vehicles with functioning water and sewer systems can camp in state parks and forests beginning July 1.