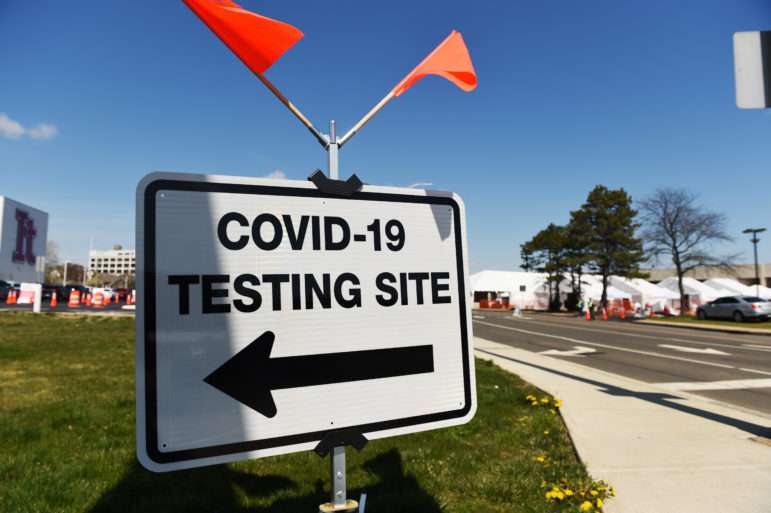 A sign directing traffic to the entrance for the state’s first rapid Covid-19 testing center in New Haven in April 17. The site is run by CVS Health and the state of Connecticut and provides results within about 30 minutes using a rapid test.

Throughout the course of the pandemic, the governor has said that testing will be a major benchmark as nail salons, gyms and bowling alleys prepare to reopen later this week. There have been 342,338 COVID-19 tests reported in Connecticut, with 13,985 additional tests given since yesterday, according to public health data released Saturday afternoon.

Rallies and protests for police reform and against racial injustice continued Saturday. Protesters marched from the Bloomfield Town Hall Green to the home of Michael Fannon, a white resident charged with second-degree breach of peace and interfering with an officer, according to court records.

Fannon, 56, is accused of having a gun while questioning Chazre Douglas, 28, a black man, about what he was doing in the area. Douglas told police he pulled over Sunday to talk on his cell phone and was in the neighborhood to be paid for mowing lawns, according to The Hartford Courant. Fannon admitted to police he had a handgun with him — after first denying it — and described himself as a neighborhood watch member, the Courant reported.

Fannon was released from custody. His next court date is scheduled for Aug. 13 in Hartford Community Court.

The Connecticut Resource Conservation and Development is inviting residents to visit local farms and rural businesses this summer. The Tour des Farms Fundraiser has organized bike rides on specific dates in select regions in the past. But with social distancing guidelines in effect this year, the group has put together stops across the state and visitors are welcome to ride motorcycles and cars to visit farms anytime this summer.

The program officially starts June 20 and will include eight regional routes, each featuring six to 10 farms with 75 farms participating overall. Information about the ride and registration details can be found at tourdesfarms.org . Participants are asked to donate to the 2020 Connecticut Tour des Farms Program Fund.