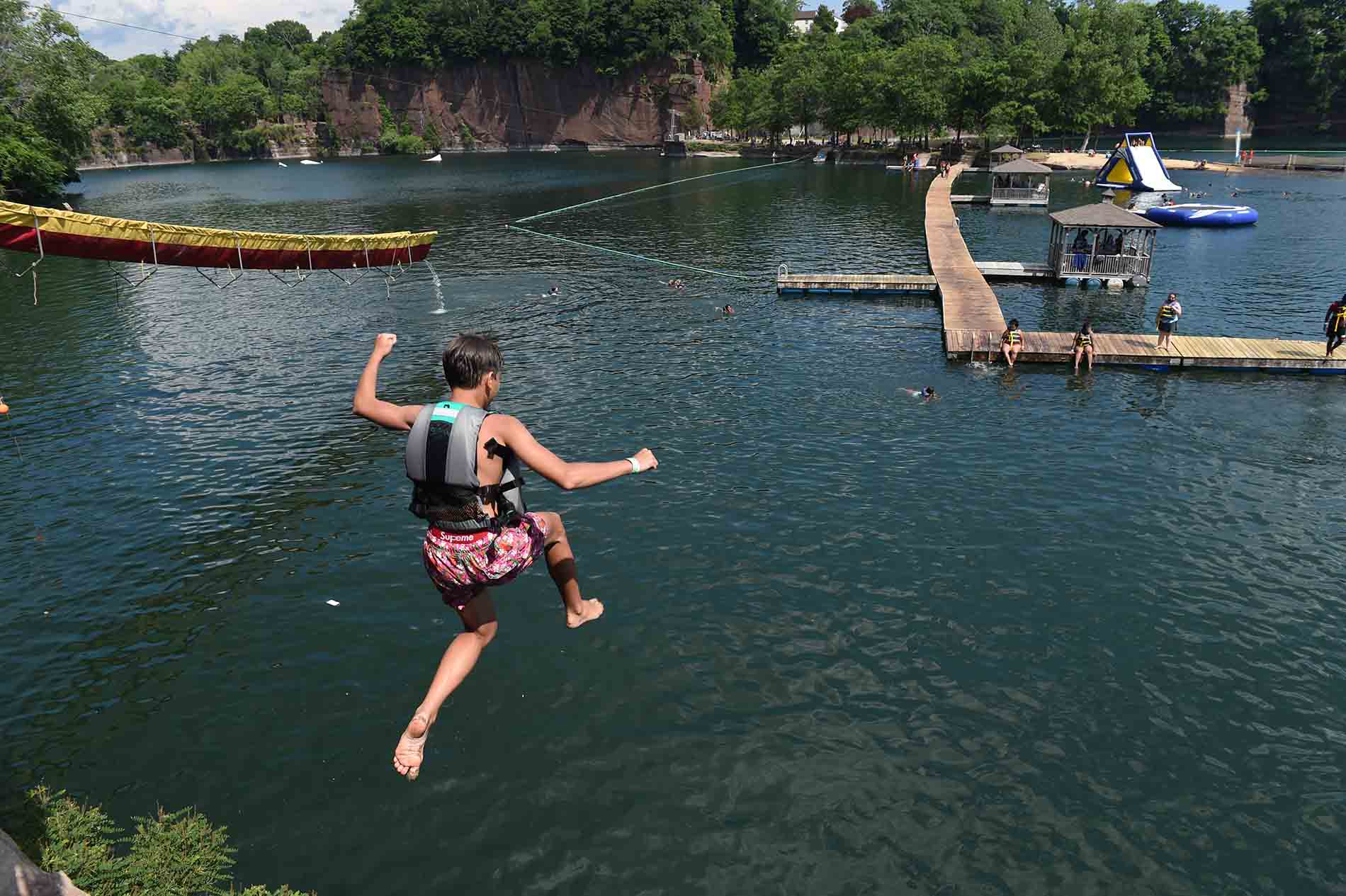 A boy jumps from a cliff at Brownstone Exploration & Discovery Park in Portland on Monday. The park opened for the summer on June 20, three weeks later than normal, to adhere to the state’s Phase 2 reopening guidelines to prevent the spread of COVID-19. All patrons have their temperatures checked before being allowed admission and are encouraged to social distance and wear masks when not in the water.

Connecticut, New York and New Jersey officials are now considering imposing a self-testing or quarantining order on people coming in from other areas of the U.S. with high COVID-19 infection rates, Gov. Ned Lamont said Monday.

Lamont said that, while Connecticut continues to have a coronavirus infection rate of below 1 percent, some portions of other states like Florida, Texas and Arizona are seeing infection rates of 10-15 percent or higher.

“We will have some guidance on that very, very soon,” Lamont said of the regional quarantine order during a Monday afternoon briefing at the State Capitol. Some other states have imposed two-week quarantine orders on travelers coming into their states during the pandemic.

Lamont said he would favor giving an exemption to people coming into Connecticut from high-risk areas of the U.S. if they can prove they recently tested negative for the disease. But Lamont didn’t specify how such an order for people arriving in the northeast could be effectively enforced.

The numbers of Connecticut’s COVID-19 cases, hospitalizations and related deaths are continuing to slow, a situation that is in sharp contrast to many states around the U.S. that are seeing a surge in infection rates and deaths.

But Lamont also warned against complacency as Connecticut’s economy continues its cautious reopening, and said residents should disregard President Donald Trump’s weekend comments about a reduced need for testing.

At a campaign rally in Tulsa, Oklahoma on Saturday, the president said he’d told his staff to “slow the testing down, please” because increased testing was producing increased numbers of positive results. A White House spokesperson later labeled Trump’s comment a joke.

“Ignore that,” Lamont said of the president’s statements about testing. The governor said the state will continue its efforts to increase COVID-19 testing and contact tracing.

“This is no time to relax,” said Lamont. “I am worried about people getting complacent.”

According to state data released Monday, the total number of people hospitalized in Connecticut for the virus dropped by 9 patients since Sunday to 140. The death toll from the virus increased by 9 more fatalities, to a total of 4,263. 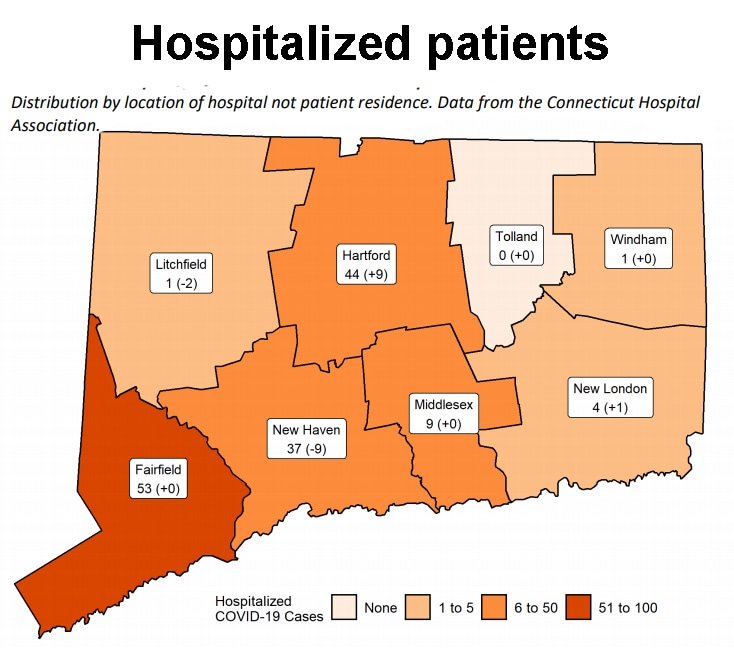 Connecticut’s numbers differ sharply from pandemic trends in states reporting thousands of new cases and hospitalizations. Most of the states experiencing COVID-19 surges are in the south and west, according to data from John Hopkins University.

The U.S. reported more than 36,000 new cases as of Sunday. On a global basis, the nation trailed only Brazil, which had 55,000 new cases, in terms of the spread of the coronavirus.

Additional businesses and institutions, including Mystic Aquarium’s indoor exhibits and YMCA indoor facilities, were scheduled to reopen Monday, as were some outdoor summer camps for children. Many Connecticut restaurants reopened for indoor dining over the weekend, but bars and nightclubs remain closed due to the pandemic.

Lamont also said the state apparently hasn’t seen any surge in coronavirus infections as a result of the limited reopening of Connecticut’s tribal casinos or from the mass protests that followed the Minneapolis police killing of George Floyd. 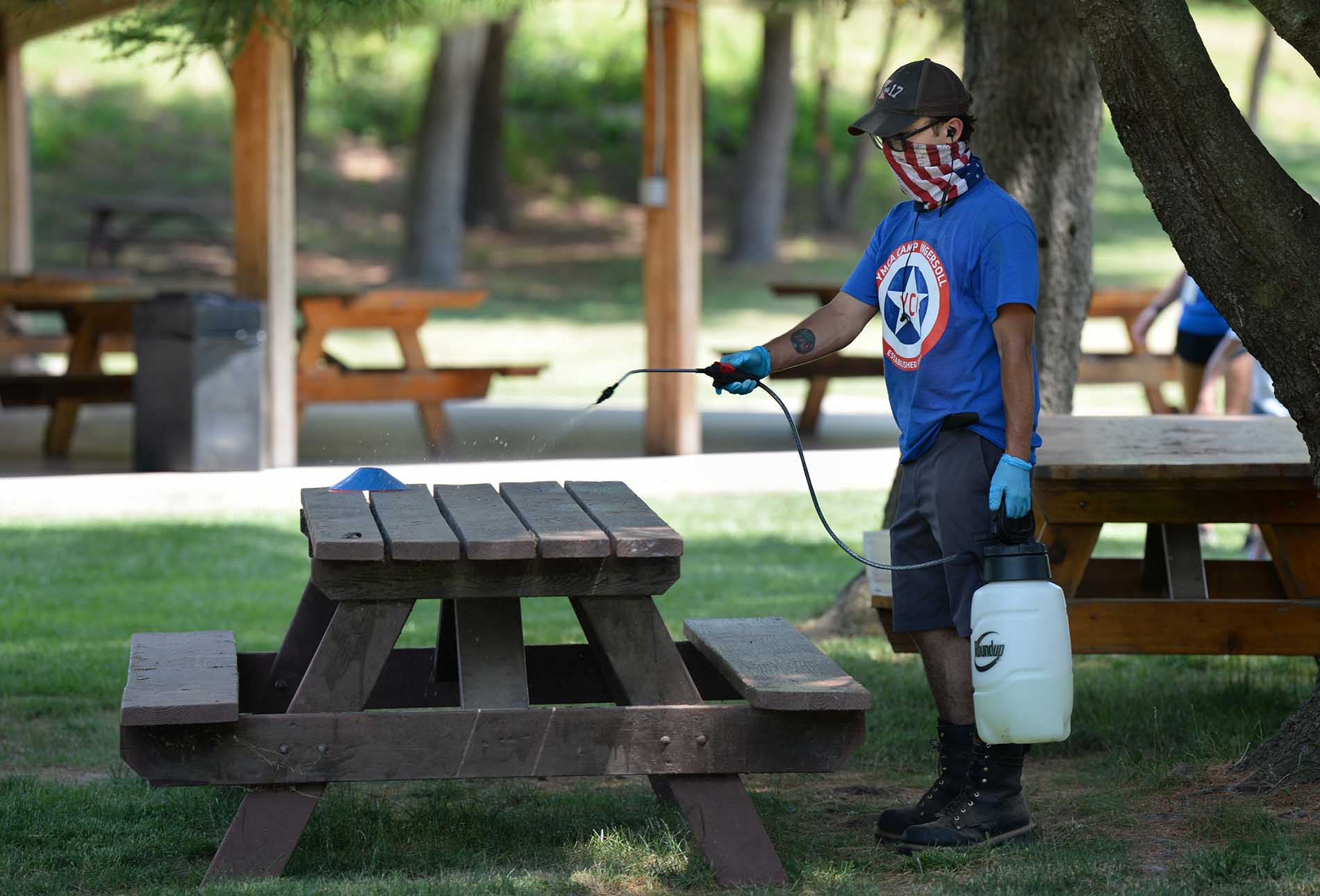 A camp counselor disinfects a picnic table at YMCA Camp Ingersoll in Portland on the first day of summer camp.

He praised the casinos for their efforts to get patrons to socially distance and wear masks.

In a recent letter to Lamont, Rodney Butler, chairman of the Mashantucket Pequot Tribal Nation, said the tribe’s Foxwoods Resort Casino is now expanding its indoor offerings to customers.

“We are pleased to announce that we have expanded our current offerings with the reintroduction of the Fox Tower gaming floor, additional hotel and indoor dining capacity, indoor recreation (bowling and indoor karting), and a new drive-in movie experience,” Butler said in the letter.

“Foxwoods has consistently met the self-imposed 25 percent daily capacity threshold and we will continue to abide by that restriction for the foreseeable future,” Butler said. He added that any new expansion of services will be done after consultation with medical guidelines.

Connecticut’s governor said many of those states with rising infection rates had opened bars and restaurants early, unlike this state’s more cautious approach.

But Lamont cited a case over the weekend of a New Haven bar/restaurant, called 50’s Lounge LLC, that was ordered closed by city officials for violating Connecticut’s pandemic safety rules about social distancing and crowds.

The governor said the bar had more than 1,000 people on the premises when city officials shut it down. New Haven officials said the owners of the establishment initially refused to comply with a shutdown order Saturday night.

“So far, I’d say, so good,” Lamont said of the state’s slow reopening plan and the cooperation from both residents and businesses.

“The businesses of Connecticut have really stepped up,” Lamont said.

Lamont also urged residents to help with the state’s efforts to contact people who test positive and then trace others the infected person may have been in contact with in order to limit the spread of the virus.

The governor urged anyone who receives a text, email or telephone call from the state contact tracing program to cooperate to help protect others in the community.

“If you see that [text], please take it seriously,” Lamont said.

A number of state and federal support programs for renters during the pandemic, including Lamont’s no-eviction order, are due to expire on July 31 and the governor said Monday he is considering some added state help for renters facing financial difficulties.

“We’re taking a look at that,” Lamont said. He warned that, with various pandemic programs ending, “People are potentially going to be hitting a wall” as of July 31.

However, the governor continued to voice opposition to an extension of the federal $600-per-week added unemployment benefit, which is due to expire at the end of July. He said he still favors a Republican plan to provider a one-time, $450 stipend for unemployed people who choose to return to their jobs.