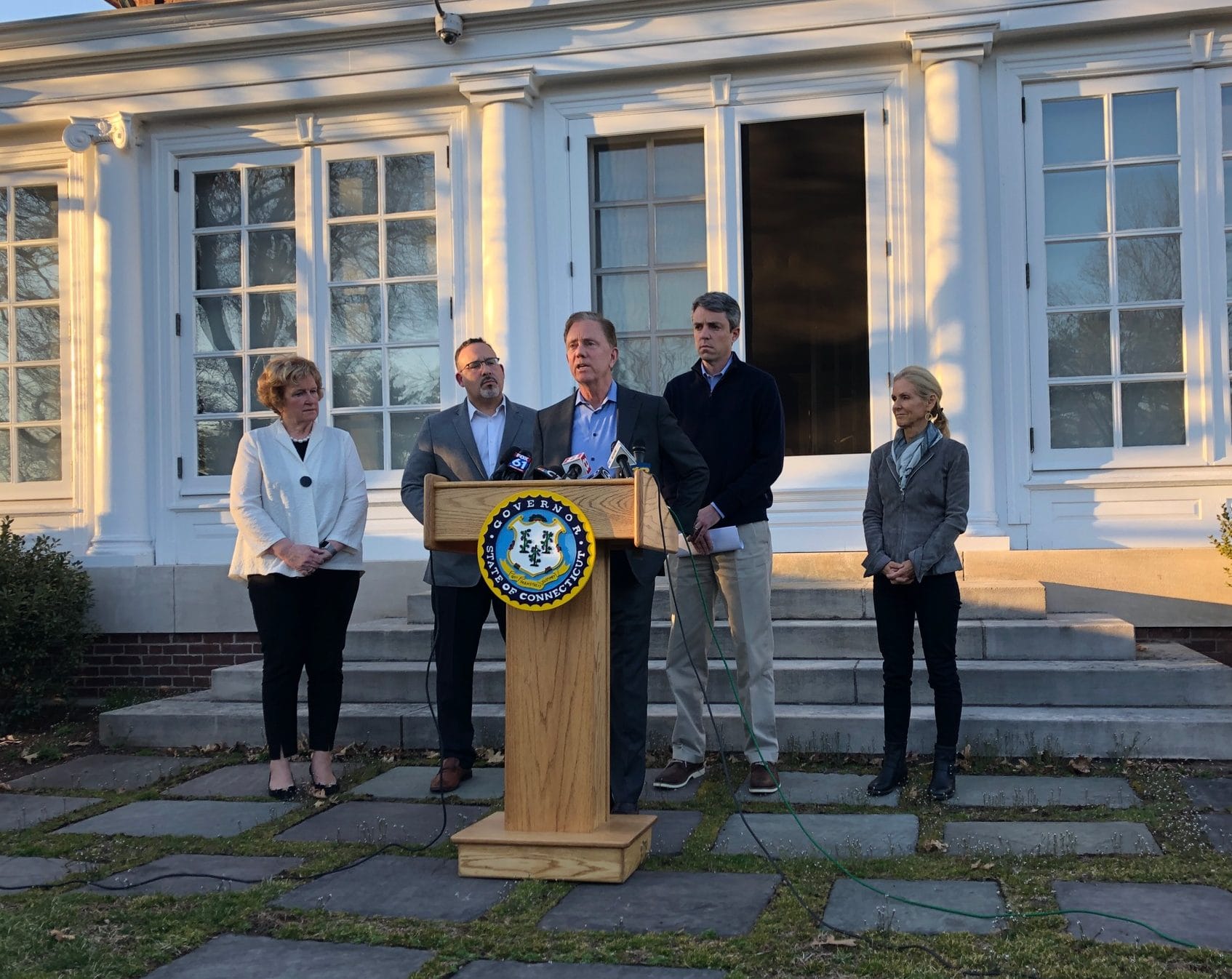 Gov. Ned Lamont flanked by (from left) Fran Rabinowitz, the leader of the state’s superintendent’s association, and Education Commissioner Miguel Cardona in March as they announced the closure of Connecticut schools. Also pictured is Josh Geballe, his chief executive officer, and wife Ann Lamont.

The state released requirements and guidance Monday for local districts to open schools this fall as hospitalizations in the state due to COVID-19 fell under 100 for the first time in months.

The Department of Education released its plan Thursday to return students to schools this fall with an option for parents and guardians to choose to keep students home temporarily. The state introduced the possibility to rehire retired teachers and teachers who voluntarily identify as “high risk” or have other health concerns to lead continued distance learning programs.

“We know that one approach is not always best in all communities so we are listening to how districts consider this and trying to share best practices there to mitigate not only the distance learning and not only making sure that children can learn remotely but also balancing the responsibilities of teachers who will also have students in front of them“ Cardona said at the press conference,” Cardona said.

Schools will be required to designate a COVID-19 Health and Safety Compliance Liaison to answer questions and record concerns from students, parents, teachers and staff.

Much like stores, schools will be required to have markings on the floor to encourage social distancing and space between workstations. The report emphasizes space between teachers and students when face-to-face to reduce droplets.

As was discussed last week, students, teachers and staff will all be required to wear face covering when inside school — with exceptions for underlying medical conditions.

Each school in a district must meet the Department of Public Health’s cleaning and disinfecting guidance, among other things.

School officials and teachers will also be required to teach students about expectations related COVID-19 precautions and provide soap, paper towels, tissues, disinfectant wipes, and hand sanitizer for older students. The state plan calls for schools to provide cloth face covering when feasible if a student does not have one.

The plan offers guidance on meals and nutrition including personal protective equipment for cafeteria workers and possible pick-up only or classroom delivery of food. But the planu only requires students to continue to have access to school meals at home if they are receiving meals and snacks as part of the National School Lunch Program (NSLP), School Breakfast Program (SBP), Afterschool Snack Program, and Special Milk Program (SMP).

Meanwhile, school buses will run at full capacity if state COVID-19 numbers continue to trend downward. The state says it may reduce bus capacity and enforce social distancing if it finds there is a moderate spread of the virus. The plan recommends school bus monitors to promote distancing but it is not required.

Lamont boasted of an infection rate under 1 percent with 6,354 new tests reported Monday.

Even with trends improving in Connecticut, Lamont said he is increasingly hesitant to expand indoor dining regulations to more than 50 percent capacity or allow bars and clubs to reopen later this summer.

The Department of Correction announced Monday that it had concluded the first round of COVID-19 testing of inmates and staff. With 9,504 offenders tested across 14 facilities, there were 832 positive results — a 9% infection rate for COVID-19.  This does not include 510 prisoners who tested positive before the mass testing program ordered by Lamont began.

The testing began May 13 and concluded June 23, according to the Department of Correction. There are currently three prisoners recovering from coronavirus related symptoms, the department said.

Of the roughly 6,000 correction employees, 380 have tested positive for the COVID-19 virus. All but three employees had recovered and returned to work as of Monday.

The department says it will continue testing with a second request for inmates who refused earlier.

The city of Hartford removed a statue of Christopher Columbus early Monday morning. The statue stood at the intersection of Lafayette Street and Washington Street since 1926, according to Mayor Luke Bronin’s office.

Bronin joined officials around the country in reevaluating the legacy of Columbus.

“Even during his own life and by the standards of his own time, Columbus was known and punished for his extraordinary tyranny and brutality, and there are better ways and more worthy heroes to honor the proud heritage and legacy of our Italian American community,” Bronin said in a statement.

The statue was removed from its base on the Columbus Green in Hartford and placed in storage, the mayor’s office said. Bronin said Monday city officials will work with the Italian-American community to better represent their history and influence in Greater Hartford.

The early morning removal of the statue in Hartford was not met with the protests held in New Haven last week when that city removed its statue from Wooster Square Park.

Lamont announced more than $33 million in state and federal funds to aid renters, homeowners and landlords impacted by the COVID-19 pandemic.

The state Department of Housing allocated  $10 million for a rental assistance program in Connecticut. The program will make payments directly to landlords on behalf of approved tenant applicants, with a priority on lower-income households who have been denied unemployment.

The Connecticut Housing Finance Authority will administer $5 million for eviction prevention to help renters who were in the process of eviction before the declaration of the COVID-19 public health emergency and $10 million to provide mortgage relief to homeowners whose mortgages are not federally insured.

The funds also include $4 million in rehousing money to pay security deposits and initial rent payments for people who became homeless due to the pandemic. administered by the Department of Housing.

Officials said Monday that keeping residents in housing is key to economic recovery from the pandemic.

“Housing stability is critical to the health and wellbeing of Connecticut residents, and COVID has had a significant impact on the ability of many of our families to pay the costs of their housing and maintain that stability,” Housing Commissioner Seila Mosquera-Bruno said in a statement.

The program announced Monday also includes $2.5 million in rental assistance for those who are ineligible for emergency assistance through the federal CARES Act, including those who are undocumented. This money will be administered by the Department of Housing.

The Connecticut Coalition to End Homelessness will administer $1.8 million in funding for reentry and rehousing assistance for people exiting incarceration.

Housing and immigration activists met outside the Capitol Monday calling for help to improve housing stability in the wake of the pandemic.

Eric Cruz Lopez of the Cancel Rent Coalition, said this is especially true among undocumented immigrants.

“We know that, that is going to continue to happen because not all of them have been able to go back to work yet,” Cruz Lopez said.

Department of Transportation officials Monday told legislators that many roadwork projects are on or ahead of schedule, due to less traffic this spring during the early phases of COVID-19 restrictions and closures. But with less traffic also came higher speeds and more serious crashes.

DOT Commissioner Joseph J. Giulietti said his department assisted with some horrendous crashes where speeds determined to exceed 85 MPH were involved. Giulietti told legislators during a virtual legislative appropriations committee meeting Monday afternoon that he is open to talking with state police about the possibility of installing speed sensing cameras on state highways.

State construction projects are on budget and ahead of schedule in many cases, said Mark Rolfe, Department of Transportation Deputy Commissioner and Chief Engineer. Rolfe said the department saw 15% of the typical traffic this spring during COVID-19 shutdown of state businesses.

The Metropolitan District announced it will not charge late fees on resident’s water and sewer bills until Aug. 1. The suspension of late fees under Lamont’s executive order applied to water bills due after April 1 and was set to expire July 1. The MDC will continue to suspend water service shutoffs for non-payment through September 9 under the statewide utility shut-off moratorium.