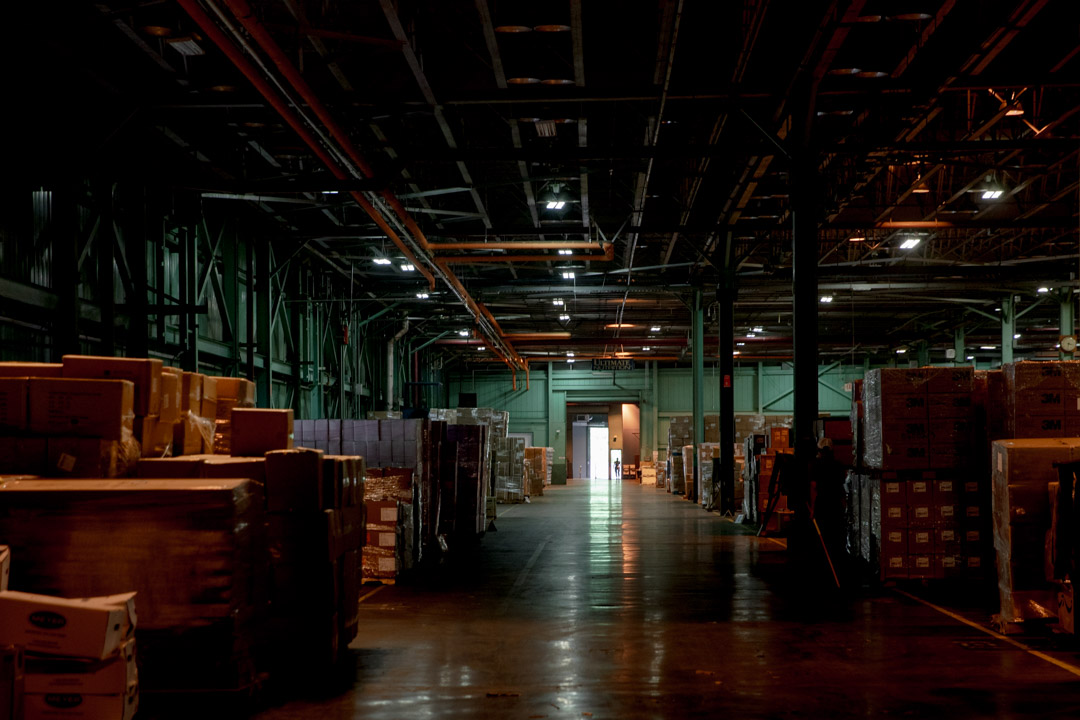 Personal protective equipment is stored at a warehouse in New Britain. The Connecticut National Guard has focused on gathering masks, gloves, face shields, protective gowns and coveralls since late March to distribute them to essential workers.

In a New Britain warehouse, state officials are trying to amass a 90-day stockpile of personal protective equipment for medical personnel by the end of July in case Connecticut gets hit with the COVID-19 surge now ravaging many other states.

The problem is that most of this critical PPE stockpile – more than $91 million worth – has been ordered but not yet delivered. State and hospital officials in Connecticut are worried that the soaring U.S. demand for critical coronavirus-related equipment like respirator and surgical masks, gloves and gowns could once again cause major supply problems here.

“It’s something we are following very closely and are concerned about,” said Josh Geballe, Gov. Ned Lamont’s chief administrative officer and the person in charge of building up the state’s coronavirus reserve of PPE.

The state stockpile is intended to serve as an emergency backup for hospitals, nursing homes and other medical facilities that are also seeking to build up their own supplies of PPE.

The Yale New Haven Health system currently has a 30-day to 90-day supply of different types of PPE, according to Lorraine Lee, the system’s vice president for corporate pharmacy and supply chain services. YNHH operates five hospitals across southern Connecticut and Rhode Island, including those in Greenwich, Bridgeport and New Haven. 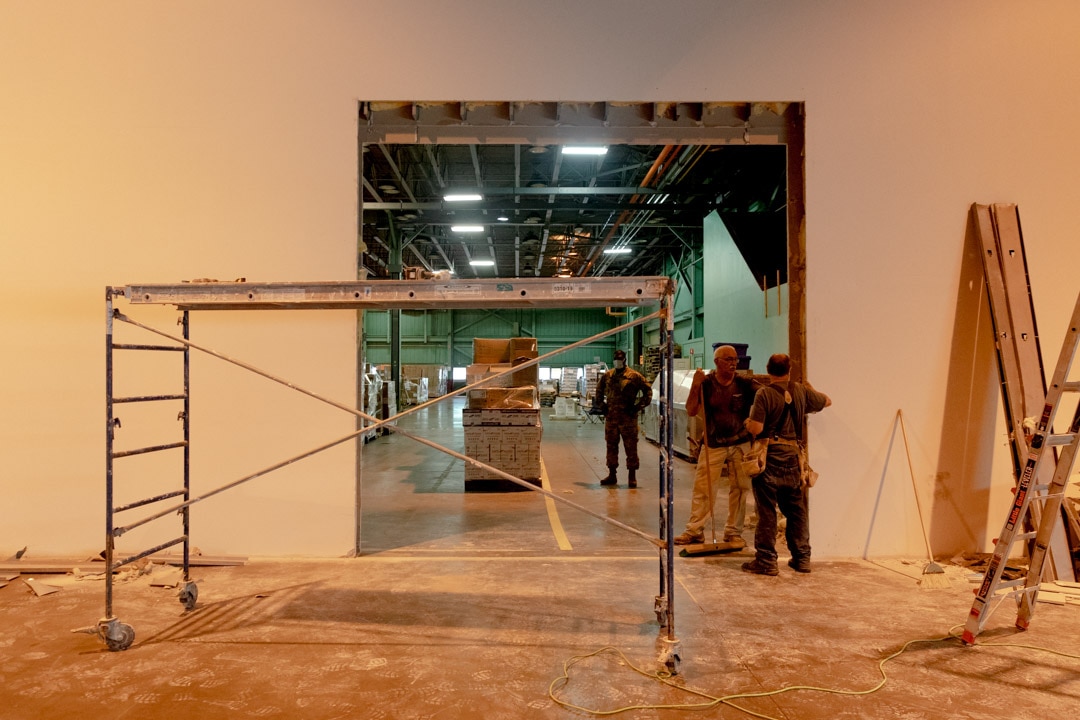 Bert Turcotte, left, and Claude Laflamme make a hole in the wall Tuesday to expand the space to keep personal protective equipment.

But Lee and other hospital officials warn that keeping their facilities supplied with adequate amounts of PPE depends on a lot of complex factors, such as the number of COVID-19 patients both here and around the nation and on medical equipment manufacturers and distribution networks.

“It depends on the supply chain… and the ability of manufacturers to keep up with demand,” Lee said Tuesday.

Geballe said the Lamont administration has budgeted about $97 million to build its stockpile for a possible next round of the pandemic.

The latest state listing for orders of PPE shows that the state is still waiting for delivery of more than $91.4 million worth of respirators, surgical masks, hospital gowns, face shields and other equipment. The backlog involves at least 56 large state orders, including individual orders of $16 million and $36 million. 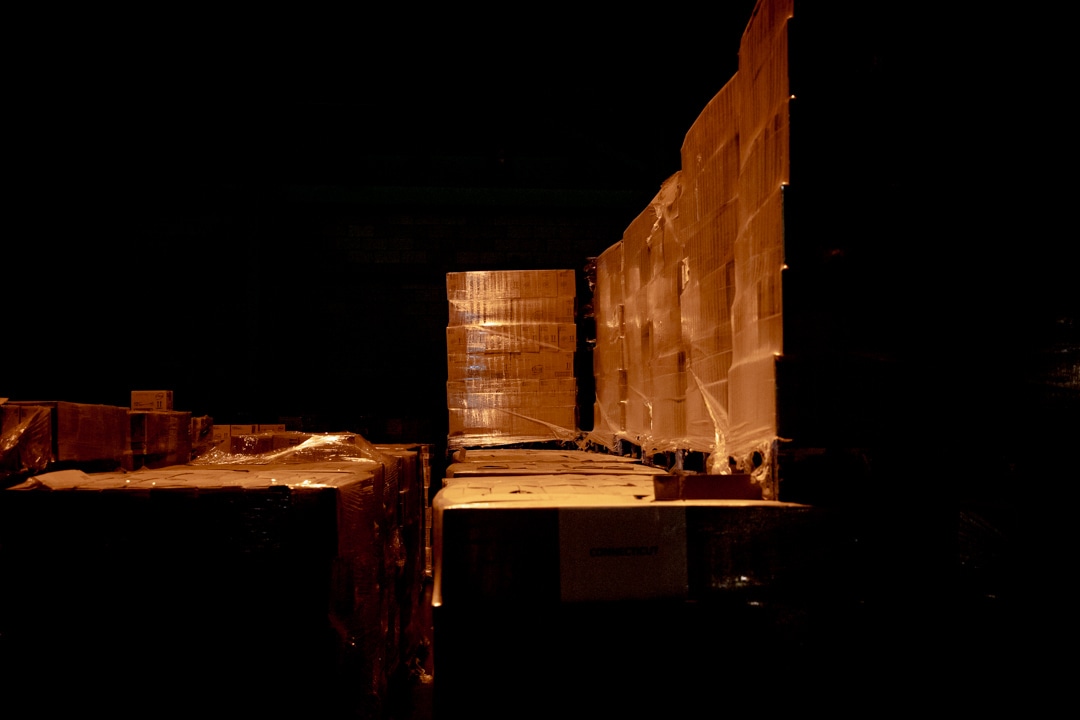 Soap boxes are piled up at a warehouse in New Britain. Medical and state officials are worried that the increasing demand for personal protective equipment across the states and globally could once again mean that the supplies will run short.

“Keep in mind that all major suppliers have been significantly increasing their manufacturing capacity, including domestically, so while demand continues to grow so does supply,” Geballe said in an email Tuesday in response to questions about whether the state could achieve its stockpile goal by the end of July.

“We are working to build the stockpile as quickly as possible while continuing to supply existing needs,” Geballe said.

The massive surge in coronavirus cases and hospitalizations in Florida, Texas, Arizona, California and other states right now is a “huge concern” to Lee and other hospital officials because of the potential impact on whether sufficient PPE supplies will be delivered to Connecticut hospitals. Many states are breaking records for new COVID-19 cases and hospitalizations and at least 31 states saw surging numbers of coronavirus cases in the past week.

“The demand in other states is so enormous that it’s taking away from what we ordered,” Lee said. She said that the supplies YNHH ordered “back in March are starting to come in now.”

In April and May, when Connecticut was at the height of its first round of the COVID-19 pandemic, hospitals, nursing homes and first responders around the state faced serious shortages of PPE because of supply chain problems. State and hospital officials were scrambling to order supplies from all over the world. 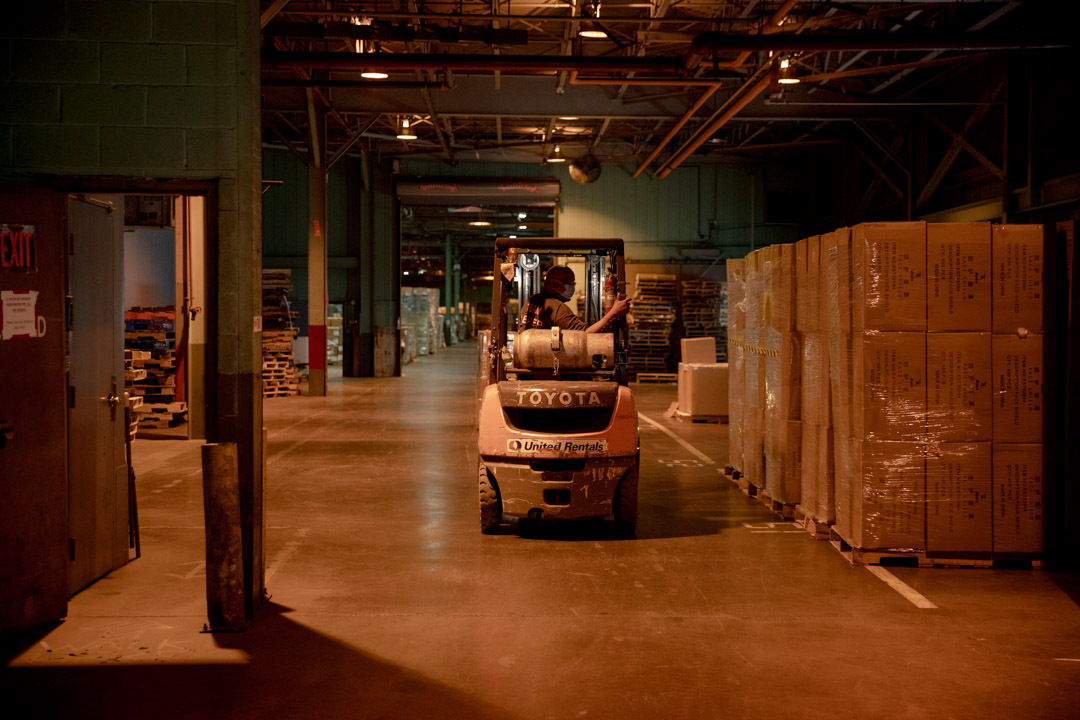 Isolation gowns are transported into the warehouse in New Britain. State officials are attempting to build up a three month stockpile of personal protective equipment in case Connecticut sees another COVID-19 surge.

“You purchased from wherever you could get it,” Lee said, adding the purchasing situation was made more difficult because “some [PPE bought during the height of the pandemic] was counterfeit.” She said that, while substandard or counterfeit PPE amounted to less than 5% of what was ordered, it required a lot of staff hours checking everything that came in, particularly from overseas.

Kumar said he believes his operation “has secured a good supply chain [for PPE] for several months to come.”

“We don’t stockpile because we don’t have the capability to stockpile,” Kumar said. Instead, Hartford HealthCare has “paid significant increases in prices to secure our supply chain,” Kumar said.

Experts have repeatedly warned that reopening the U.S. economy too soon would likely trigger a resurgence of the pandemic. Kumar said his staff is now working on new computer models to try and predict whether Connecticut will also be hit again and how the Hartford HealthCare system’s PPE needs might change.

“My concern is that [despite] the discipline the state of Connecticut has shown so far… we’re not immune,” Kumar said, adding that Hartford HealthCare “is much stronger and better prepared now” if another surge does happen.