Scientists say the nation is experiencing another public health emergency that will further exacerbate the coronavirus crisis: extreme heat.

The National Oceanic and Atmospheric Administration is predicting the next three months will be hotter than normal for much of the country; 2020, it says, likely will rank as one of the hottest years on record.

Communities of color, particularly lower-income Black and Latino neighborhoods, will be particularly affected. Extreme heat likely will push more residents into crowded cooling centers, where they may be exposed to the virus, and worsen breathing problems and other underlying health conditions that already disproportionately affect people of color, researchers say.

As the summer heats up, cities are offering help with utility bills; repairing existing air conditioning systems or providing free air conditioners for low-income residents; opening more cooling centers; and parking buses with the air conditioning running so that passersby can cool off.

But advocates and many scientists say officials need to develop strategies to protect the health of vulnerable communities for the long term, as climate change leads to more frequent and intense heat waves.

As part of the CARES Act, the federal government this spring allocated $900 million in grants from the Low Income Home Energy Assistance Program to states to support home energy assistance for low-income households affected by the coronavirus.

And 26 states and the District of Columbia have issued moratoriums on shut-offs for nonpayment of gas, water and electricity bills, according to the National Energy Assistance Directors’ Association. In six of those states — Hawaii, New Mexico, North Carolina, Washington, Wisconsin and Vermont — those moratoriums will expire this week if they are not extended.

But many of the measures used to protect people from extreme heat, such as inviting people to cooling centers or movie theaters and malls, are incompatible with social distancing measures.

Widespread job loss because of the pandemic makes it hard for some residents to keep the air conditioners running — if, that is, they’re lucky enough to have AC units in their homes. Energy assistance plans, which help low-income people with heating and cooling bills, vary greatly from state to state, according to the National Energy Assistance Directors’ Association. 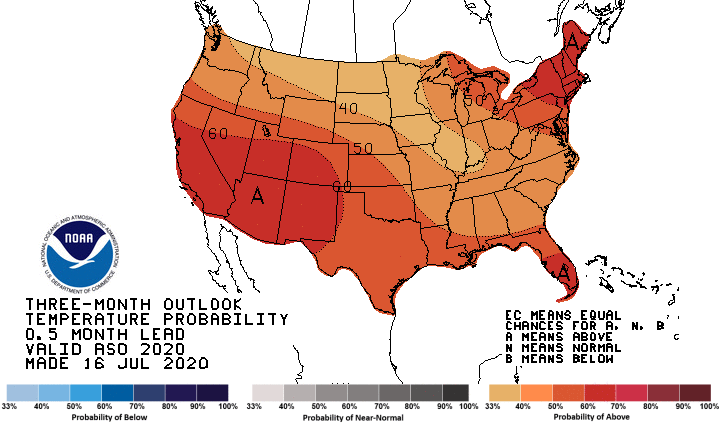 For example, some states offer new air conditioning units for eligible residents, while others will repair or replace existing units and still others do not have an air conditioning program, according to the association.

“Both short- and long-term approaches are needed,” said Dr. Caren Solomon, a physician at Brigham and Women’s Hospital in Boston. Solomon is a co-author of an article published in the New England Journal of Medicine that said extreme heat poses additional challenges to COVID-19 mitigation efforts, as cooling centers may become crowded from households lacking air conditioning or facing heat-related electrical blackouts.

“But we’re in a situation where there’s immediate risk for people in extreme weather,” Solomon said.

This month marks the 25th anniversary of Chicago’s deadly heat wave, when temperatures reached 106 degrees and more than 700 people, most of them people of color, poor or elderly, died over a five-day period. During that heat wave, Black Chicagoans were 1.5 times more likely to die than white residents. Hospitals were overwhelmed; morgues were swamped and the city had to bring in refrigerated morgues to deal with the overflow.

Chicago is a precursor for what’s to come as the nation struggles with both climate change and a long overdue reckoning over racial inequities, said Dr. Linda Rae Murray, former chief medical officer for the Cook County Department of Public Health who worked as an internist in the Cabrini-Green public housing community during the 1995 heat wave.

(The Chicago Department of Public Health did not respond to Stateline requests for comment.)

Decades of segregation and redlining in housing policy created the conditions that make urban communities of color more vulnerable to extreme heat.

A January study published by the Multidisciplinary Digital Publishing Institute found a correlation between redlining and disproportionate exposure to extreme heat waves, which are worsened by climate change.

Neighborhoods that were redlined in the past are more likely to have fewer trees, be near high-traffic freeways and have densely packed apartment buildings, all of which contribute to higher temperatures, the study found. The report was written by researchers at the Science Museum of Virginia, the Center for Environmental Studies at Virginia Commonwealth University and the School of Urban Studies and Planning at Portland State University.

Historically redlined neighborhoods, where mortgage lenders refused to lend to Black people, now contain the country’s hottest areas, the report found. Redlining increased segregation and decreased real estate investment, creating conditions where there were “fewer environmental amenities that help to clean and cool the air,” such as tree-lined streets and parks, the report found.

People of color are more likely to live in concrete-heavy, dense urban areas with few pockets of greenery known as heat islands, where heat gets trapped and the temperatures can be as much as 22 degrees higher than their surroundings, said Sacoby Wilson, an associate professor with the Maryland Institute for Applied Environmental Health and an expert in environmental justice and health disparities.

And at the same time, extreme weather is driving people out of their homes in search of cooler conditions, he said.

And social welfare checks to make sure shut-in elderly residents are OK are harder to do safely during a pandemic, he said.

Further complicating matters, low-income Black and Latino residents are more likely to live in crowded conditions without reliable access to healthy food and health care, he said. And they’re more likely to be essential workers, often working more than one job to make ends meet, increasing their potential exposure to the coronavirus, Wilson said.

The federal government allocated more money for the Low Income Home Energy Assistance Program to states to support home energy assistance for low-income households affected by the coronavirus. Some states, such as Pennsylvania, used that money to help residents weatherize their homes. Others, such as Ohio, looked to expand existing cooling assistance programs.

In New York City, officials successfully lobbied the state to use the federal money to help low-income residents with their utilities.

But critics argue the program is underfunded and comes with too many restrictions, such as requiring documentation from a doctor to qualify for assistance. In at least 26 states, public housing residents whose utilities are included in their rent aren’t eligible for energy assistance under the assistance program, according to the U.S. Department of Health and Human Services.That means if they don’t have AC units in their apartments — and most aging public housing complexes don’t have them — they can’t get help purchasing a unit, said Juan Declet-Barreto, a climate vulnerability social scientist with the Union for Concerned Scientists, a nonprofit founded at the Massachusetts Institute of Technology.

Seventeen states don’t have mandatory moratoriums on utility shut-offs, including Alabama, Arizona, Delaware, Florida and Georgia, all COVID-19 hotspots, according to the National Energy Assistance Directors’ Association.“In a setting of extreme heat, if people have adequate air conditioning, they can often stay at home,” said Solomon, the co-author of the journal article. “But we’re in a situation where people have lost their jobs. We need to make sure people’s electricity and water aren’t turned off.”

This year, New York City committed to passing out 74,000 air conditioning units to low-income residents 60 and older who don’t already have one. The program costs $55 million and will be paid for through a combination of federal block grants and contributions from the New York City Housing Authority, said Jainey Bavishi, director of the Mayor’s Office of Resiliency.

“Extreme heat and COVID are on a collision course,” Bavishi said. “We wanted to make sure we are providing ways for the most vulnerable New Yorkers to stay cool at home.”

Still, the city has faced criticism from councilmembers for delays in getting air conditioning units installed. So far, Bavishi said, the city has installed 45,759 units.

“We are working as quickly as we can to ensure that eligible New Yorkers receive AC units,” Bavishi said.

In the long term, cities, counties and states are going to have to come up with solutions to safeguard vulnerable communities from the vagaries of climate change, said Laurie Schoeman, senior program director for Enterprise Community Partners, a national affordable housing nonprofit.

That means adopting a “reparative restoration” approach, investing in green solutions for communities that have shouldered the biggest environmental harms, Schoeman said.

Some of the solutions are relatively inexpensive, such as painting roofs and asphalt light colors to reduce heat or planting more trees, said Schoeman, who sits on a New York City advisory board that focuses on equity in city planning.

But ultimately, Schoeman said, “there has to be a fundamental shift in how these communities are planned.”

This story was first published by Pew’s Stateline on July 30, 2020.