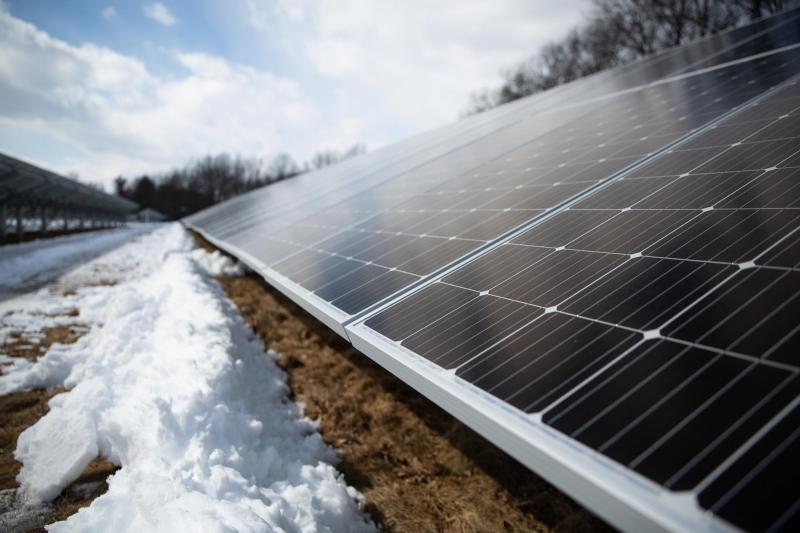 Panels at the state’s only shared solar array in Bloomfield, pictured in 2019.

The opaque world of energy policy continues to roil the surface of state government this week as regulators again chastised the state’s two biggest utilities: Evesource and United Illuminating. This time, the Public Utilities Regulatory Authority is fining both companies, alleging an “insufficient” rollout of a program called shared solar.

Shared solar lets customers who can’t put panels on their roof subscribe to a nearby solar array and get a credit on their bill. In 2018, the legislature passed a statewide shared solar program, which requires utilities to identify eligible customers and automatically enroll them.

“This is really designed to benefit low and moderate income customers,” said Charles Rothenberger, an attorney with the climate advocacy organization Save the Sound.

But how, specifically, the utilities will enroll those customers remains unclear, at least in the eyes of state regulators.

On Friday, PURA fined Eversource and United Illuminating $10,000 apiece alleging their plans for seeking and enlisting customers in the bill-rebate program “failed to meet the minimum requests” of state regulators and “failed to outline specific plans … as required.”

The utilities have until Sept. 30 to refile their plans. In separate statements, Eversource and UI said they are committed to state clean energy goals and will continue to work with state officials.

“We strongly support Connecticut’s commitment to renewable energy and we look forward to continue working with PURA and other stakeholders on the implementation of this important program,” said Eversource spokesperson Tricia Taskey Modifica, in an emailed statement.

“We remain fully committed to this program and its clean energy goals, and we will continue to work with PURA to resolve technical issues,” said UI spokesperson Ed Crowder, in an emailed statement.

“It’s got to be frustrating for ratepayers”

When the legislature passed a statewide shared solar program in 2018, the idea was pitched as a double-whammy: an advancement of state clean energy goals with the tangible financial impact of credits on the bills of needy customers.

Rothenberger said he believes the utilities are turning more attention to the issue of shared solar and are trying to develop protocols for identifying and enrolling customers, but “clearly, they are not doing everything perfectly. As you see in some of the back and forth with PURA.”

“These projects are ones that are developed by private solar companies, and they need to know that the investments they’re making are prudent,” Rothenberger said.

“Of everything that we’ve worked on over the past ten years, this one, shared solar has been, by far, the most difficult to get up and running,” said Michael Trahan, executive director of Solar Connecticut, which advocates for solar developers and installers at the state capitol.

Right now, only one shared solar project is operational: an array in Bloomfield. That project was authorized and built under a separate pilot program the state launched years ago.

But before that pilot site even went online, the legislature authorized a statewide shared solar program, the one at the center of PURA’s recent $10,000 fines.

According to state filings, developers have submitted at least two dozen bids to build shared solar projects under that statewide program.

“It doesn’t make me feel especially good that whenever this program does get off the ground that it’s going to function very well,” Trahan said.

While he said the fines for both utilities were relatively minor, Trahan did express optimism that PURA was sending a clear signal to utilities about the speed at which they’re developing plans to implement shared solar: get moving.

“We live in the state with the highest electric rates in the lower 48 states in the country,” Trahan said. “We should have the best-of-the-best alternative energy programs in place and working without opposition.”