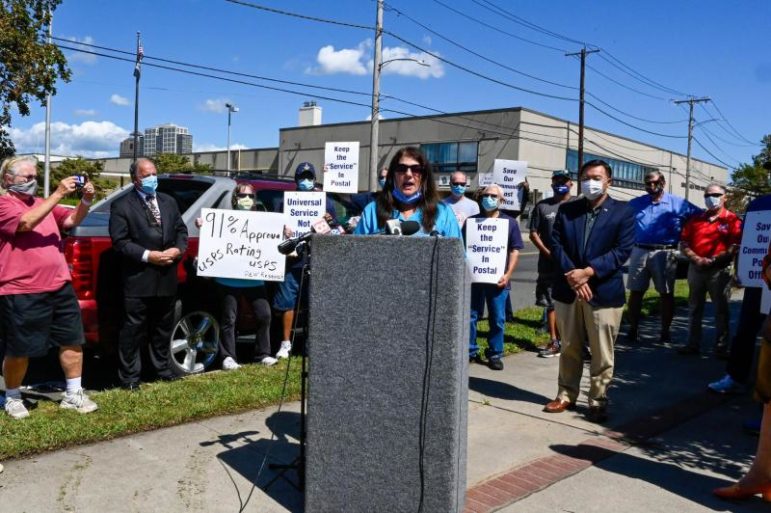 Postal union leader Joan Levy addresses a press conference in New Haven. The union was concerned about the disuse of sorting machines and other issues.

A postal union official in Connecticut says sorting equipment dismantled in this state, as new Postmaster General Louis DeJoy began his controversial cuts in service, has not yet been reinstated.

Joan Levy is the director of the Connecticut State Postal Workers. She said two machines in Wallingford that could process 35,000 pieces of mail an hour were taken apart and left in pieces.

“It’s a disgrace,” Levy said, speaking at a New Haven press conference hosted by U.S. Rep.  Rosa DeLauro, D-3rd District. “What we were told was if they had to take them out of commission because of the low volume, they were gonna keep them on the workroom floor, tarp them, and have them ready for the ballots when they have a surge of ballots. That’s not what happened, they are in pieces on the workroom floor.”

Levy said four pieces of high speed machinery in Hartford were also disassembled and put in a parking lot. Despite DeJoy’s announcement on Tuesday that he would hold off on cost-cutting measures till after the election, the American Postal Workers headquarters received an email from the postmaster saying he would not be putting those machines back in use.

“That afternoon the Postmaster said, ‘Ah, I was just kidding, right? I don’t mean it, I’m gonna step away and things are gonna go back to normal,’” Tong said, eliciting agreement from a crowd of union postal workers. “I want to see that in writing, in a binding judicial decree before a court.”

Someone from the crowd chimed in about wanting to see the sorting machines put back together.

DeLauro had gathered a press conference to share her support for $25 billion in new funding for the Post Office proposed by Democrats in Congress. DeLauro is headed to Washington D.C. Saturday to vote on emergency legislation, the Delivering for America Act, which, if passed, would keep the postal service from changing its operating capacity from what it had in place on January 1, 2020.

DeLauro called for DeJoy to be removed.

“This is an essential service,” she said. “At an extraordinary time to sabotage the mail is unconscionable. It is an essential component of our democracy and of people’s lives, and I will, my friends, [support the service] through rain or shine, sleet or Donald Trump.”