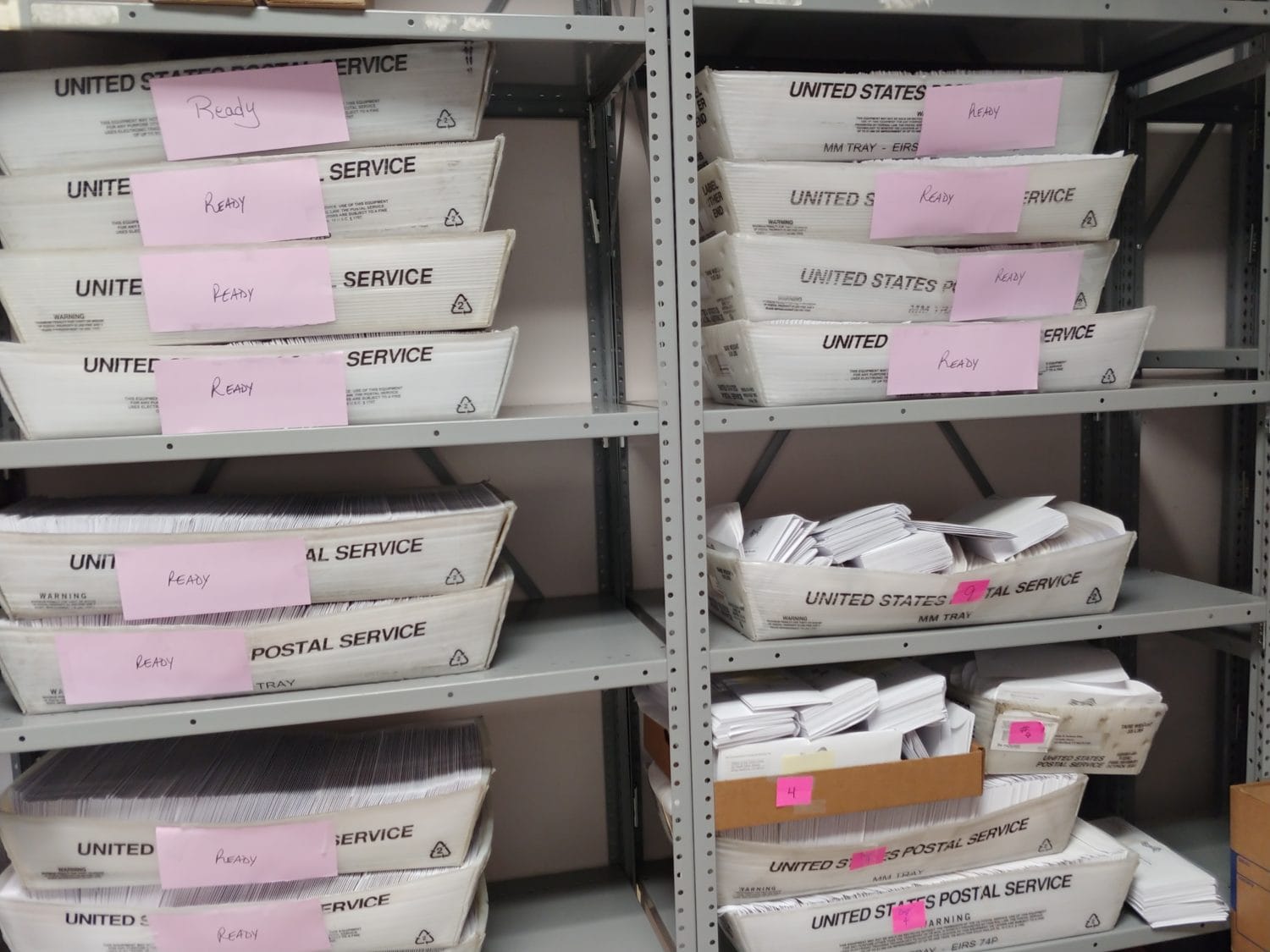 West Hartford Town Clerk Essie Labrot’s relief and excitement were palpable mid-afternoon on Wednesday. “BALLOTS JUST CAME IN!!!” she exclaimed in an email. They were arriving with just a day to go before they were to be mailed out to the 14,000 voters who applied for them.

But “we had a snafu,” she lamented. The ballots didn’t include the right identifying codes, and had to be reprinted and redelivered on Thursday.

Town clerks all over Connecticut are trying to manage an unprecedented influx of absentee ballot applications as they administer an equally unprecedented election caused, in part, by a global pandemic. The first of about half a million absentee ballots are to be mailed out starting Friday.

Since the primary in August, clerks’ offices statewide have faced long hours, printing problems and technological challenges as they’ve raced to start mailing out ballots on the Oct. 2 kickoff.

Some have fared better than others, but they all have their share of stress.

Lyda Ruijter, Stamford’s city clerk, hadn’t received any ballots on Thursday but expects to receive “a good chunk” by the kickoff. From now on her office (and all the others) will have 48 hours by statute to send out an absentee ballot in response to each application.

In Danbury, City Clerk Janice Giegler’s election team of 12 part-time and two full-time staff work on a separate floor of city hall, but if any of them were to get COVID-19, “God help us,” she said. The disease is both the cause of their increased workload and an obstacle.

Ruijter in Stamford cleans up between shifts as her 80 volunteers and a dozen or so new staff members file in and out of the building where she works, but everyone passes through the building’s central lobby. If there were a COVID case? “I don’t even want to think about the scenario,” she said. The Secretary of State’s office has told municipal clerks and registrars offices to have COVID emergency plans, but Stamford’s city clerk’s office doesn’t have one, Ruijter said.

According to the most recent data from the Secretary of the State, as of September 30, at least 426,528 absentee ballot applications had been processed statewide, representing 26% of registered Democrats, 14% of registered Republicans and 15% of unaffiliated voters. In 2016, there were a total of 126,948.

In an effort to limit the risk of contracting COVID-19, the state mailed out absentee ballot applications to all registered voters in Connecticut for the first time this year. Voters can also request ballots online or by other means from their municipal clerks. Irrespective of the source of an application, all of them ultimately are directed to local town clerks.

When an application is received by a city or town clerk’s office, it must be logged in a centralized voting registration system.

Applications that were mailed by the state contain scannable barcodes to facilitate this input process, but the others need to be updated manually, Danbury’s Giegler said. This processing ensures that though voters may have applied for ballots multiple times in multiple ways, they will only receive one ballot, she said.

For the Nov. 3 election, unlike in the primary, city and town clerk offices are responsible for the printing and mailing of the absentee ballots, and that has its complications and its costs.

The envelopes and the packet of directions are provided by the state, while the cost of printing the ballots and the labels is borne by towns, according to Gabe Rosenberg, spokesman for Secretary of the State Denise Merrill. Merrill’s office has made over $2.3 million in federal funds available to help towns bear the increased costs of equipment and personnel.

Clerks have reported issues with two steps of the ballot preparation process: getting ballots printed in time and using the state’s centralized voter registration system.

Anna Posniak, the president of the Connecticut Town Clerks Association and Windsor’s town clerk, said that all municipalities would be receiving a portion of the ballots they ordered in time to start mailing them out, though three or four might not receive them until Friday.

The state approved two printers for the printing of ballots, Labrot said. There has been a scramble to get ballots ready — “just a function of their only being two possible printers for 169 towns and none of them are able to order ballots before September 15,” Rosenberg said. There are 500 different ballot configurations across the state.

Municipalities were encouraged to ask for ballots to accommodate 80% of their registered voters, said Joan Angelini, Town Clerk of Westbrook. Ruijter in Stamford played it even safer and requested absentee ballots for all 100% of her registered voters, she said. “You never, ever want to run out,” she said.

Towns have contingency plans if they do run out of ballots, but tabulation will be more time-consuming down the line if they have to resort to those, Labrot said.

After switching printers, Ruijter is now banking on a New Hampshire company to come through for her on Friday. They’ve promised her 500-1,000 ballots for each of the 23 districts under her purview, she said.

Another challenge for Ruijter has been the Connecticut Voter Registration System, which Stamford did not use in the previous presidential election. Thirty towns in the state did not use CVRS prior to 2020, according to Posniak.

The system itself has largely not changed since the primary, Rosenberg said, but the scanning functionality was introduced to speed up processing efforts. Clerks’ offices received instructions on how to use the system this week, Ruijter said, but in the meantime “my staff had to figure it out on the fly,” she said. And with the sheer volume of applications, delays in processing applications through CVRS add up.

Smaller towns are less likely to have IT staff on hand to resolve any issues with the system, said Angelini. According to the state’s tracking data, Westbrook, a town of about 7,000, had processed four ballot applications as of September 30. It has received 1,100 applications. On Wednesday, she was waiting on CVRS labels to send out ballots; on Thursday, she was able to start printing them.

It’s clear that not all towns are using the computer system as they are supposed to, Rosenberg said, but the Secretary of the State’s office has not heard of widespread issues with it of late. The office also hosts weekly Zoom conference calls for election officials to discuss voting administration.

The CVRS is key to allowing voters to track their ballot applications and their ballots through the Secretary of State’s online portal. The tracking portal is intended in part to ease voters’ concerns about the status of their application and absentee ballot.

And owing to a combination of bureaucratic and political influences, there is plenty of voter concern.

Voters “are seeing things on the news and talking to other people and they’re scared,” Westbrook’s Angelini said. “I’m hearing things like ‘If I vote absentee, are you going to throw my ballot away?’” Phones have been ringing off the hook with concerned citizens, stretching her limited resources, she said.